OK so now that we know how to navigate and tell time, let’s figure out what it is we’re looking at. We already know the deal with the North Star and Sirius; now let’s go back to the Big Dipper.

Of course the Big Dipper is worth knowing if only because a) it’s so easy to find and b) it’s the fastest, easiest way to find the North Star and hence True North. But it turns out that the Big Dipper is also an absolutely fascinating constellation because of where it is, where it’s going, and the stars that comprise it.

The first cool thing about the Big Dipper is this: The stars in it are- with some qualification- overwhelmingly in the same place. As in the same region of space. Let me explain. 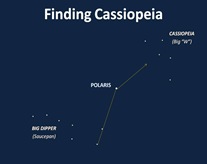 When we look at constellations, we see them because of how the stars are positioned relative to Earth; in many/most cases, the stars are nowhere near each other, and in fact often further from each other than they are from us. Here’s a quick example. Let’s scoot across to the other side of the Northern “clock”, to Cassiopeia, the big “W”. If you look at the “W” right-side up, the right-hand upper point of the W, the star Caph, is 54 light-years away. But the middle upper point of the W, Gamma Cas, is 610 light years away. In other words, these stars are nowhere near each other relative to Earth.

*The names of the 7 stars in the Dipper are the old Arabic names. Sometimes star names are hard to remember, so I give them nicknames. I call these 2 “Alka-Seltzer” and “Doobie”. 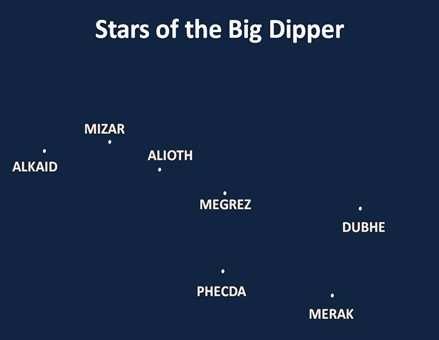 The second cool thing about the Big Dipper is that it’s going somewhere. The “Gang of Five”, all currently in the same neck of the woods, and 8 other stars in the “official” Ursa Major constellation, are all headed in the direction of Sagittarius, or “left” relative to the upright Dipper. But “renegades” Dubhe and Alkaid are heading “down” and to the “right”. 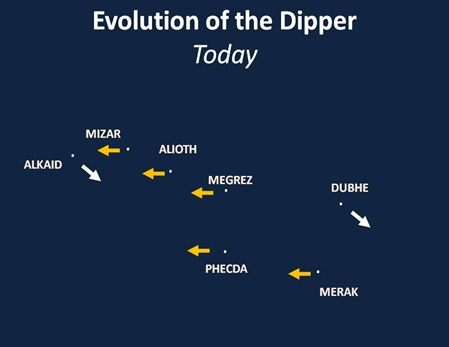 This means that in as little as 10,000 years the dipper will be significantly distorted, the “bowl” widening and flattening, the “handle” bending, and by 50,000 from now it will be unrecognizable*.

*Wikipedia claims the Dipper will eventually reform in the opposite direction, but I can’t find a corroborating source. See? I really do check this stuff out… This expanded “Gang of Five”, or 13* stars, is known as the Ursa Major Moving Group**. All seem to be of similar age- roughly 500M years***- and similar metal content, which makes astronomers suspect that they originated from the same molecular cloud as what’s called an open cluster****. If so, it’s the closest open cluster to Earth. 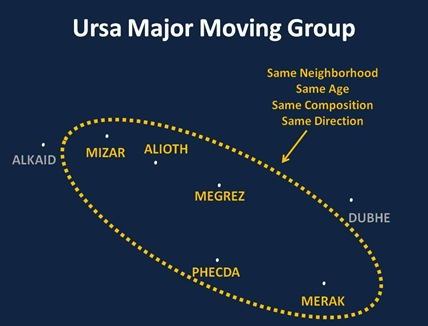 *Maybe 14. Maybe more. In fact for a long time Sirius was suspected to be part of this group, though generally not anymore.

**This would be a great name for a band. Or a moving company.

***Which BTW, is way younger than our sun, which is about 4.5 billion years old, and has another 5 billion or so years of “good times” ahead.

****In contrast to a globular cluster, which is way cool, but way outside the scope of this post.

If all that’s not cool enough, pretty much every star in the Dipper has a way cool story. In the interest of time I’ll focus on just 2 of them: Dubhe and Mizar.

Dubhe is one of the 2 pointer stars to the North Star. Like Polaris, it’s an old, big star, having “burned” out its hydrogen core and is now stabilized by helium fusion. It’s the 2nd-brightest star in the Dipper (Alkaid is 1st), and is about 30 times the size of our sun. Dubhe is a multiple star system. Its closest companion is a smaller, dimmer and hotter star about as far away as Uranus is from our Sun, and which goes around it once every 44 years. From a planet orbiting this companion star, Dubhe would appear to be a second orange sun in the sky, about half as bright as our sun appears in our sky.

What’s really weird is what day & night would be like on such a planet. For ½ the year, there would be 2 suns in the sky- a bright yellow one and a dim orange one. For the other ½ of the year there’d be a “day” with a bright yellow sun, and a “night” with a dim orange sun. And of course the “Spring” and “Fall” would be all kind of whacky. 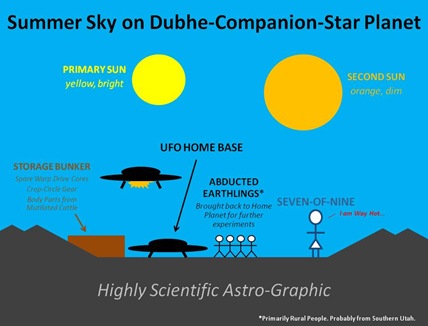 Much further out- 400 times farther- is another star, similar to the first companion, and this guy also has its own smaller companion, orbiting it every 6 days. From a planet orbiting these stars Dubhe would appear as an orange star 10 times brighter than Venus. So Dubhe is actually a quadruple star system, comprised of 2 orbiting pairs.

Something else about Dubhe- It used to be the North Star, as recently at 5100BC, due to the Precession of the Equinoxes, the 26,000-year “wobble” of the Earth’s axis we talked about in yesterday’s post. And it will be again, by 20,500AD*.

Lastly, as if you needed any more reasons to check it out, Dubhe is the state star* of Utah.

* Really? We have a State Star? Do we really need a State Star? Silly as it may be, I get why we have a state bird (Seagull) or a state tree (Colorado Blue Spruce)- because those things are somehow associated with the state of Utah. How on Earth is a given star associated with a specific state?

Astro-Tangent: None of the hypothetical planets I’ve mentioned so far in this post have actually been detected. But the greater, “official” constellation of Ursa Major contains one of the most interesting exo-planetary systems yet discovered. It’s a fainter star, visible to the naked eye under optimal conditions, which means- unfortunately- not from Salt Lake Valley. But it you’re out in the desert or somewhere on a clear night there’s a good chance you can spot it. 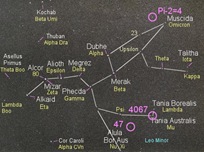 The star is 47 Ursae Majoris. To find it, drop down below the Dipper to the next bright star directly below it (if the Dipper were upright.) That’s Psi Ursae Majoris. 47 Ursae Majoris is about half again as far below that star, very slightly to the right (if the Dipper were upright- diagram right, not mine.) The system contains (at least) 2 planets (with position and mass very roughly analogous to Jupiter and Saturn), and appears to be much more “like” our solar system than the vast majority of systems in which planets have so far been detected.

Ursa Major contains 2 other stars- HR 4067 Ursae Majoris and 4 Ursae Majoris- with known planets, but neither system is anything like ours.

Even more interesting is Mizar, because it is an optical double. If the night is clear, and your eyesight sharp, you can see another smaller star just barely above and to the left of Mizar (relative to upright Dipper), at a distance of roughly 3 light-years from that star. With binoculars, it’s super-obvious. This is Alcor, which is believed* to be associated with Mizar in a multiple star system. But it gets weirder.

Even without Alcor, Mizar is a double star, and was the first binary star system ever discovered, way back in 1650. The 2 distinct stars are clear with a decent telescope, and orbit each other every 5,000 years. But even weirder, each of those 2 stars has its own, much closer companion orbiting it, so the Mizar-Alcor system is actually a quintuple star-system, with Alcor orbiting the other 4 every 750,000 years. 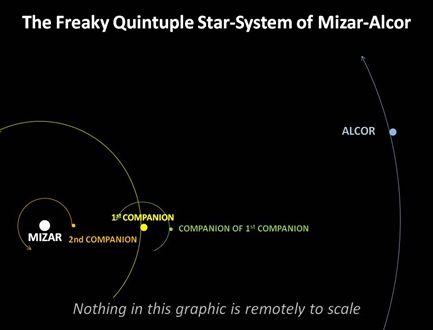 Wow. All this excitement and complexity makes our own home system seem a bit dull in comparison. But as cool as the Big Dipper is, Orion has even more action. Man, this AstroWeek is rocking!

Next Up: Red Giants, Supernovae and Nebulae!

Oh wait. I just realized I did this whole post and never had a good (non-science) tangent. OK, tell you what- tomorrow’s post will be entirely tangential, and then I’ll get back to Orion.

Great, in 10,000 years I'll never be able to find the North Star, because Doobie and Merak will be pointing somewhere completely different.

OK, how many beers did you have before making the highly scientific astro-graphic? Regardless I got some good laughs out of it.

My head is spinning faster than some of these stars. Which I guess on a relative basis isn't all that fast, but in absolute terms...

You worked really hard in order to be able to follow 'cluster' with four asterisks, didn't you?

KKris- Honest, no alcohol was involved in that astro-graphic. And no, I didn't smoke a Dubhe either.

Enel- Thanks, man. I really feel like I raised the bar with that one. :^)

Kris - definitely the best comment ever. I'm finding a way to incorporate this "clustering" technique into my next post. Watch for it.