Note: One more post about last weekend down South with Bird Whisperer, because we saw something cool on the way home that I’ve posted about before.

Last Sunday morning I awoke on the Aquarius Plateau before Bird Whisperer, made a cup of coffee and watched the sun rise. 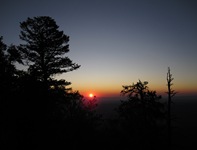 Tangent: Here’s something weird about me*. At home, office or restaurants, I always drink coffee with cream and sugar. But camping I only drink it black. Normally I don’t like black coffee, but when camping it tastes great. Weird, huh? Also weird: when backpacking I’m happy with instant, but it doesn’t taste as good when I’m car-camping, so I bring grounds and filters. Why can’t instant just taste good all the time? It would really simplify my life. Oo- speaking of simplifying my life, following my fabulous wallet-slimming project, I’ve moved ahead with my next fantastic revolutionary life-altering simplification: shrinking my keychain. But I’m pressed for time, so that’ll have to wait for another tangent in another post.

*Besides this blog I mean. Or my resemblance to Mahmoud Ahmedinejad.

When BW got up we ate breakfast*, broke camp, and started home. 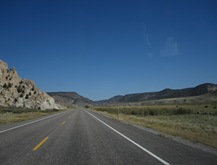 We retraced our route to the pavement from the day before back to Highway 12, then 89 North. In Panguitch I decided on a lark not to cut over to I-15, but rather to keep heading up 89. It’s a slightly longer, but prettier, route (pic left), and I hadn’t done it in a couple of years. As we drove North we could see the Aspen groves high on the East slope of the Tushars, all at peak color. 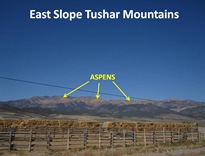 In Marysvale we stopped at a small local place for lunch*. As we ate I thought about our route, and the fall colors we’d seen all over. Now one of the things about me on a road trip is this: at any given moment, I always have 3 or 4 ideas cooking. I’m always thinking about things I would do or could do, and places I’d check out and such and whether I have time, etc. And it turned out that one of the things I’ve wanted to see for a while wasn’t too far out of our way, and right then would be a great time to see it.

*BW ordered fish and chips. He always orders fish & chips if it’s on the menu, even in tiny rural towns out in the middle of nowhere. As a native New Englander, this used to horrify me. I’d be like, “Don’t order fish. We’re 800 miles from the ocean, and probably 200 miles from the nearest airport. Wait till we go visit Grandma and Grandpa, or at least when we’re back home in Salt Lake.” But the kid likes fish, and I finally learned to shut my mouth and let him order it. I’ve bit my lip while he’s ordered fish in Marysvale, Green River, Ely, Snowville, Moab, Cortez, Stanley and Missoula.

But I was hesitant. I have a bad rap in the Watcher family for trying to cram too many geeky nature/science stops into family road-trips. And I know that small kids have a saturation point, and that if you routinely push or exceed that point, well, they may not be quite as excited about road-tripping with you in the future.

So I asked BW: “So after lunch do you just want to head home, or maybe check out something else on the way?”

BW shrugged, mouth full of fish, “I don’t know. Like what?”

“Well”, I said, trying to sound laid back, “we could stop by Fish Lake and check out the world’s largest Aspen clone…”

BW lit up: “Really? Like they’re all connected by the roots? How big is it?”

Really? He was up for that? That took like no persuading at all…. Who is this kid?

All About Fish Lake 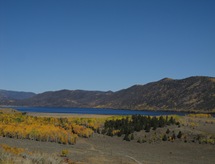 Fish Lake is another one of those Utah places I’ve meant to get to for years but never got around to checking out before last weekend. It’s the largest natural mountain lake in Utah, sitting at 8,800 feet, and lies in a type of depression called a graben, which is a depressed block of crust in between 2 parallel faults. Although a dam was built in the 1930’s to regulate outflow, it’s basically still in its natural form and dimensions. 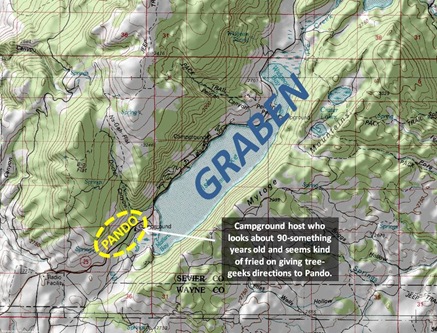 The lake has a surface area/watershed area ratio of 20%, which is very high and results in 2 interesting characteristics: first, very little sediment enters the lake. This is probably why it still is a lake; other, similar grabens in the same area with lower surface/watershed ratios have long since silted up. Second it means that the “turnover” of water in the lake is very slow; it takes around 58 years for the lake to “flush” completely.

Side Note: Of course this is a fairly brisk turnover compared to Lake Tahoe, as we saw in this post. 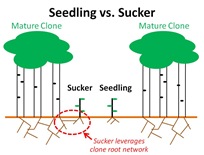 It’s a pretty place, and I hope to return and explore the area further, but none of that is what brought us there. At the Southeast end of the lake stretching from the campground up across the road and onto the mountainside is the largest known clonal stand of Aspen in the world*. Aspens, as I’ve explained in previous posts, reproduce either sexually or asexually/clonally, and in Utah the vast majority of reproduction is clonal. This stand actually has a name: Pando (Latin for “I spread”)

*I’m actually somewhat skeptical of the claim. There are a lot of big, remote stretches of Aspen in central Utah, and they can’t all have been effectively surveyed. In any case, it is certainly the largest known stand. 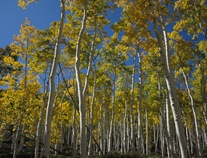 I blogged about Pando a year ago, and have known about it for several years prior, but never visited it until Sunday. The campground host gave us directions* and we backtracked to the cattleguard just before the campground turnoff, parked, and walked uphill into the forest.

*When I asked I wondered whether he’d know what I was talking about. He knew alright, and gave directions in a tired voice that implied I wasn’t the first Pando-seeking tree-geek to pass his way… Pando covers 107 acres, includes- as I mentioned- some 47,000 trees, and is thought to be the most massive living thing in the world, if you consider a clonal stand to be a single organism.* But the stat that impresses me most about Pando is its estimated age. Though the individual mature trees average only about 130 years old, the same stand has been cloning itself from a shared root network for an estimated 80,000 years. 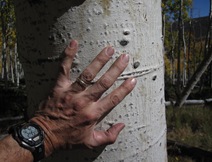 Think about that. When Lake Bonneville burst through Red Rock Pass and Lake Missoula exploded through the first of its many ice dams in their respective catastrophic floods, long before humans, grizzlies or even moose showed up in Utah, this stand was here. Mammoths and dire wolves and giant sloths and sabertooths probably brushed up against trees* growing in this stand. While Neanderthals still roamed Europe, this stand’s leaves rustled in the wind. When the first modern humans left Africa, this stand was probably already well established. Wow.

*To be clear, not the same trees/trunks, but earlier, genetically identical trees of the same clone. 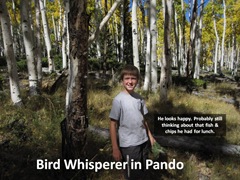 We pass by really old things all the time- rocks, mountains, valleys. But those things aren’t alive. Pando has been sending up shoot after shoot since before the last ice age, an unbroken living chain reaching back to when the world was completely different. And if we manage not to clear-cut or burn it, it’ll probably be sending up shoots long after Bird Whisperer and I are gone. Maybe even after everybody’s gone.

We wandered around for a while. The leaves were bright yellow, all turning color together. The ground below was covered with scattered boulders and low, shrubby mats of Common Juniper. Every once in a while a breeze kicked up and rustled the leaves. I’ve mused before about how aspen leaves rustling sound like whispers you can’t quite catch, and I wondered what stories this stand could tell.

It’s a big, old place, and thinking about it made me feel short-lived and small.

Bird Whisperer and I wandered around a bit more, then gradually looped back around to the car. We loaded up and started the long drive back home.

This appetite must be embedded in the 25% of genes that BW and I share. At least, until the age of 15, when a campside dinner of Pop-Tarts and kippered herring led to an upset stomach a few hours later, and I've never been able to eat kippered herring ever since. Even thinking about it now makes me a little nauseous. Pop-Tarts, though -- those are for life.

I am reminded of this quote, which works in so many ways for this blog:

Stan: "Cartman doesn't know a rain forest from a Pop-Tart!"
Cartman: "Yeah, I do -- Pop-Tarts are frosted!"

We've stayed at Fish Lake twice now and loved it. Very scenic and lots to do/see. Here's my post about the last time we were there:

Cool post-- You are spot on about all the old things we see around us daily, and how they don't strike us quite the same way as old living things do.

And super old trees? Those strike us deeply.

Thanks for the dose of perspective...

Great video, too; it was just what I needed this morning.

OK, so I was aware that the largest living organism--if you accept that definition--was a stand of aspen. But I thought I read that it was in Colorado. Not at Fish Lake. Which I have driven or ridden my bike past at least twice in the last few months.

You should do Capitol Reef Classic next year. Course goes right past Pando. Not that you'd have time to stop.

Kristen- I almost didn't include the video, thinking it might seem too "artsy". Glad it worked for you.

Kris- thanks for the link. Looks like plenty to do there, we'll have to work it into the 2010 plan.

I agree, Fish Lake is really cool. We rode by it in the Brian Head American Mountain Classic race last year and I wanted to stop and check out the geology. Riding up the basalt trail was pretty trippy. I didn't know I was also missing Pando.