There it is- my first week without a real post in 22 months. Well, at least I got an Astro-Graphic in.

Wednesday night I peeked outside a few times, but the sky was always cloudy. On last night’s drive home I noticed the sky was clearing and thought happily about how I’d get to check out the P/2010 A2 debris trail again. But after dinner, outside with glasses and binoculars, I scanned the clear sky just South of Cassiopeia again and again to no avail. Though I might possibly have caught one tiny blur through the lenses, it could well have been some distant cluster or galaxy instead; the fabulous splash across Tuesday night’s sky was gone.

I should feel lucky, fortunate to have spotted- without trying- something possibly never observed before in modern times. But instead I just feel deflated. It was so fleeting, so quick, that it somehow made me think of time passed by, chances not taken, opportunities squandered.

It was beautiful. When I spotted it I emailed and texted several friends who I thought might find it beautiful as well. 2 of them* maybe-might-have seen it, but the rest missed it.

Awesome Wife was out with friends last night, and a bit later the Trifecta and I went out in the hot tub. They picked out Orion, Mars, the Pleiades and a few other stars I’ve droned on about over so many other nights in the tub, lifting my spirits by filling me with a bit of geeky science-dad pride. At one point Twin B was trying to point out something directly overhead and the four of us all craned our necks, staring straight up. At that exact moment, a bright, slow-moving meteor streaked across the top of the sky, coming in from the West and passing directly overhead before flaring out due East up at about 75 degrees. 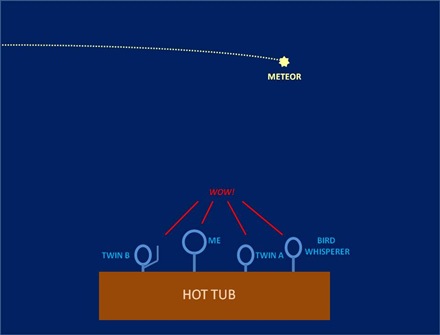 Shooting stars aren’t rare of course, but it is rare to see a spectacular one from down in the light-polluted valley. And usually when you’re with a group, and you- or one of your companions- spots a shooting star, you/they are the only one to see it- it’s flared out before you can call their attention to it. So for us to see one- a high-in-the-sky, slow-moving one- all at the same time, was an unusual and beautiful thing. More beautiful somehow even than Tuesday night’s once-in-a-lifetime impact/debris trail. The Beauty of the World is wonderful whenever and however you see it, but it’s even stronger and more beautiful when you see it together with people you care about.

Last night the stars here were more numerous--and more spectacular--than I've seen them in a long time. I suppose owing to the Moon not coming up til late late...

I looked for your Awesome Debris Trail, but I couldn't find it. Yes, I feel like I missed something. But I did see more of C. major/minor and Lepus than I ever have! What a sky!!

I know how you feel about the debris trail. IF I saw any of it, it wasn't much and hardly distinguishable through the clouds that night. Would've been nice to take it all in.

My boss is going to watch the space shuttle launch on Sunday morning. My inner geek is green.

Very cool to have caught this sight all together. I had a similar collective sighting of some (Russian I think) satellite blazing clear across the sky while some of my high school buddies and I happened to all be looking at the sky.

I think we still have sky above us but it hasn't been viewable for a while here in MN and it's not looking likely any time soon.