Last night around 8:30 we were out in the hot tub. The Trifecta were jumping around and splashing. Awesome Wife turned up the jets, closed her eyes, and tried to pretend the rest of us weren’t in the tub with her. I stared up at the sky. There were patchy thin clouds moving in and out and in the West about 45 degrees up in the sky there was one really straight wisp of cloud that didn’t seem to be moving. I watched it for maybe 5 minutes straight and it didn’t budge.

I got out of the tub, checked out space.com and learned it was this, the impact/debris trail from a probable very recent asteroid collision, 90 million miles away, between the orbits of Mars* and Jupiter. Here’s a quick locator-graphic to help you find it. It’s pretty faint to the naked eye, but I saw it in a light-polluted area without my glasses (I’m slightly near-sighted.) It’s quite clear with binoculars.

*Note that I said the “orbits” of Mars and Jupiter- not the planets themselves. Right now Mars is on the opposite side of the sky in early evening, just rising in the East. It’s the big orange honking “star” just below Gemini. I’ll do a post on it soon. 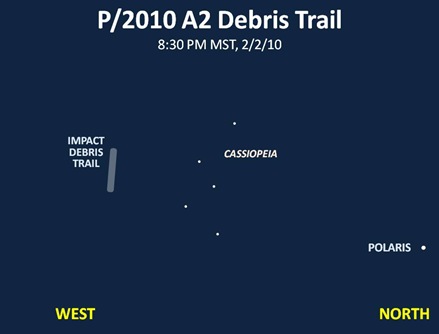 This is the first time such a collision’s ever been observed, and it may well be that another such event is not seen while we’re around to see it. I expect it’ll be visible tonight as well, so get outside and check it out.

I tried twice (in between working on my daughter's science project) and there were clouds both times. I'll try again tonight.