Under My Nose, and Your Help

When we got out of Gooseberry, I checked my voicemail*, and was pleased to hear from Professor Chuck, saying that a friend had found a new Gambel-Turbinella oak hybrid that he wanted to show me.

*I don’t get cell service up on the mesa. Ironically, our old favorite campsite got taken out about in the last year when they put up a cell tower. But the tower is Verizon and my phone is AT&T**, which has miserable coverage in the Utah backcountry.

**Not my choice- my employer’s. Whenever my time with this company ends, my first stop will be the Verizon store.

Side Note/Background: Unless you’ve been following this blog a while, you probably have no idea what I’m talking about. A few years ago I became interested in- and discovered an occurrence of- a type of hybrid oak that’s very rare in Northern Utah. Yeah, I know that sounds way geeky, but the ultra-super-way cool thing about these

hybrids is that they were formed thousands of years ago, when the other species of Oak- Shrub Live Oak, Quercus turbinella, lived this far North alongside “normal” scrub oak, which are Gambel Oak, Q. gambelii. Which means that these stands are likely several thousand years old*.

*To be clear, many Gambel Oak hybrids are several thousand years old, and many Aspen clonal stands are likely much older. But with a Gambel-turbinella hybrid stand, one of the parent species hasn’t lived within 250 miles for probably 4,000 – 5,000 years.

I gave the background of these rare hybrids in this post, and since posted several more times about various hybrids I’ve discovered or visited. All hybrid oak posts in this blog are labeled- wait for it- “hybrid oak”, and nearly all of them date from the Falls of the past couple of years, because that’s when the hybrids become visible. 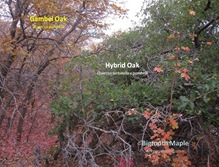 So the next (this past) weekend, on a rainy Sunday afternoon, I met up with Professor Chuck and we drove over to one of the trailheads in the upper Avenues. You see, this hybrid wasn’t far away at all. It was right under my nose. 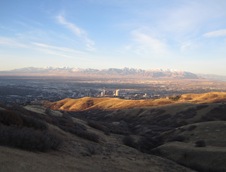 By “under my nose” I mean that over the past 15 years I’ve passed within a couple hundred yards of this stand hundreds of times and never spotted it. In fairness most of the times I’ve passed it have been when the Gambels are leafed out, and its aspect is such that even when you pass within ~600-700 feet of it on the Shoreline trail, it’s still largely invisible. But there are actually a couple of spots from along the Bobsled trail where, if you stop and crank your head around just right*, you can spot it.

*Admittedly, the middle of the high-speed downhill Bobsled trail is about the last place where one would be incline to “stop and crank your head around…”

Side Note: I’m not giving the exact location in this post, not because the stand is in any imminent danger, but rather because I didn’t discover it. I don’t personally know the discoverer, other than his first name is “Blake” and he’s a biology student of some sort up at Weber State. 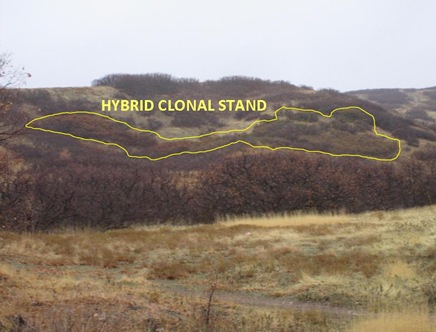 We walked an easy trail over to the bottom of the gully running up Perry’s Hollow, then up along the Bobsled trail for a bit before bushwhacking up the hillside through oak.

Tangent: After years and years of battling thickets of scrub oak on 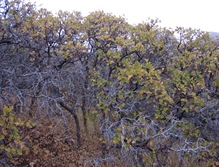 exploratory foothill hikes/scrambles, I’ve come to the conclusion that you can’t fight scrub oak and win; you have to have an almost Zen-like patience, persistence and a Moses-and-the-Red-Sea sort of faith that a path through will eventually reveal itself. And inevitably, it always does. But the more impatient I am in finding that path, the more scratched up, tired and pissed off I am when I ultimately make it through. You can’t find a path through scrub oak; the path has to find you.

Nested Tangent: I love posting these little nuggets of professed backcountry wisdom, because I imagine they make me come off like some kind of Wilderness Zen Master or something. In truth I am Mr. Zero-Patience and at least 9 out of 10 of my exploratory scrub oak scrambles end with me scratched-up, grumpy and cursing (and sometimes visiting my sewing-crush seamstress the next day.) 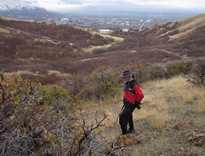 Ideally one clearing will open into the next, but sometimes the oak presents a virtual wall. Fortunately the walls are often penetrated by game trails, which while not wide enough to simply march straight through (much less ride a mtn bike along) are just barely well-enough defined to allow a skinny adult to do a sort of slow-motion twisting side-step through- almost like a kind of interpretive dance. I always assumed that most of these game trails were the work of mule deer, because I see them so frequently in the foothills, but more recently I am coming 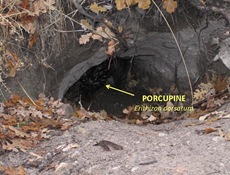 to suspect that many are actually the work of porcupines*. Mule deer stott through/over a lot of thick brush, whereas a porcupine stays low to the ground. The well-defined break-through game trail that got me through the last “wall” on Sunday passed right by this burrow, with the porcupine’s tail still visible. I passed by quickly and carefully.

*Porcupines have my absolute favorite migration/evolution saga of any mammal I’ve posted about in this blog. I just love them. Go check it out. 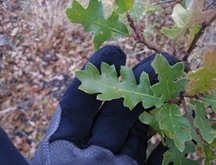 The Perry’s Hollow hybrid is a big one, consisting of several stands of a couple square hundred yards. The leaves, still present though yellowing in mid-November, clearly show the pointy-lobed-ness of their turbinella parentage (pic left). The leaves on one small sub-stand on the downhill side of the main stand looks extremely live-oak-ish (pic below, right), and Professor Chuck suspects that while the main stand may be an F1 hybrid, this sub-stand may be a turbinella back-cross.*

*I explained F1 hybrids, F2s and back-crosses in this post. Turbinella back-crosses are particularly interesting, because they hint at the holy grail of Wasatch hybrid-oak hunters: a modern-day living stand of pure Q. turbinella. Though unlikely, it’s not impossible such a stand exists this far North; planted turbinella seems to get along just fine along the Wasatch Front. 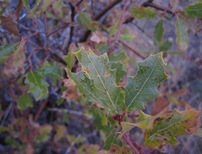 leaves I marveled at something so cool and ancient having been smack in the middle of my regular stomping grounds all this time. And it got me wondering: what other hybrid stands are there close by that I’ve biked, hiked, run or driven by time and again without noticing? If I missed this one, there must be at least a dozen or so more tucked away in the foothills between Spanish Fork and Ogden.

So here’s the point- and yes there is one and I am getting to it- of this post: As best I can tell, there are at least a couple dozen regular readers of this blog who a) live along the Wasatch Front and b) bike, hike or run trails in the foothills regularly. So if you’re one of those readers, I’m asking you a favor. Over the next week or so, if you see a stand of scrub oak that still has (mostly) green leaves on it, and the lobes/tips of the leaves are at all pointy, would you drop me a line?

Hybrid leaves can take all sorts of forms, But they key thing is 1) they are oaks, 2) the leaves are still on the tree, and still mostly green, and 3) the leaves- whatever the shape- have pointy tips. There are several photos in this post and my earlier posts with the “hybrid oak” label. Here’s a comparison, using the hybrid I discovered 3 years ago in Maple Hollow. 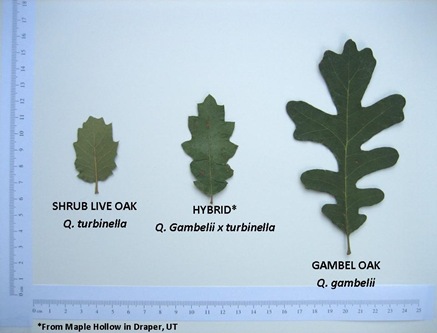 If you think you’ve found one, please comment or email to adventureREMOVECAPSbotanist@yahoo.com, removing the caps. (It would be Additionally Extra Fantabulous if you pocketed a leaf and then emailed me a photo of said leaf.) I know there are more hybrids out there. If you spot one you get a WatcherSTICKER and I write a flattering post about you*. Thanks!

*Really, this is better than it sounds. Not the sticker- the Flattering Post. It may not seem the case from this blog, but when I apply myself I can really lay it on thick. I’ve been making a living in sales for over 20 years; nobody can blow smoke up your backside like I can. Seriously, if I write a flattering post about you, you will be filled with a wonderful sense of confidence and self-worth that will last all Winter long.

Extra Detail: The Draper/Corner Canyon trail system in particular seems like a great spot. I’ve already found one on the North slope and Rudy Drobnik has found a several on the South/Utah County slope.

Yes, I know this is a total long-shot. But really, what do I have to lose?

I was watchful on my ride Saturday in the Orem foothills. Sorry, nothing but leafless oaks.

Thanks for keeping an eye out. I did a fair amount of scrambling on Saturday before the storm hoping for a spot of green, but with no luck either. With this week's succession of storms, I fear oak-hunting season has ended.