Yeah, yeah I know, I said my next post would be about desert mtn biking, new places and cool geology. But this one is time-sensitive, and so worth disrupting the blog-plan.*

*Yes, that’s right- the blog-plan. Because even though I know this whole project seems like a massive exercise in stream-of-consciousness, I really do have a plan. It’s just that I get distracted from it. Often.

Anyway, heads up: In case you hadn’t heard, there’s a total lunar eclipse visible tonight all across North America. In Mountain Time the show will last from 10:27PM tonight till 4:40AM tomorrow morning, but the real show, from the start the end of the umbral eclipse, will run from 11:32PM to 3:02AM. The super-cool part- the total umbral eclipse- runs from 12:40AM to 1:53AM.

First, the bad news: It looks like we won’t be able to see it tonight from practically anywhere in Utah. Now the good news: a fair number of people in North America outside of Utah read this blog, and some of you might well be able to see it, depending on your local weather.

Tangent: For example, you should have a good show from Phoenix. How do I know? Because Thursday night Bird Whisperer and I checked every long-range metro area weather forecast within about 800 miles, and came this close to buying 2 tickets to Phoenix. I ultimately balked (despite his serious pitching), thinking how foolish I’d feel if we blew a few hundred bucks, a day+ and ended up not being able to see it. But the forecast down there is holding for partly cloudy… we shoulda gone for it.

The deal with a lunar eclipse of course is that the Earth blocks the sun from the Moon, which can only happen during a full moon, which makes total sense when you think about it. Because moonlight is reflected sunlight, the effect to Earthbound observers is to make the moon markedly dimmer. There are 2 stages of this dim-ness. The first is when the moon enters the Earth’s penumbra, which is the part of the shadow in which only part of the light is blocked. This stage isn’t terribly spectacular, but the moon does get noticeably darker. 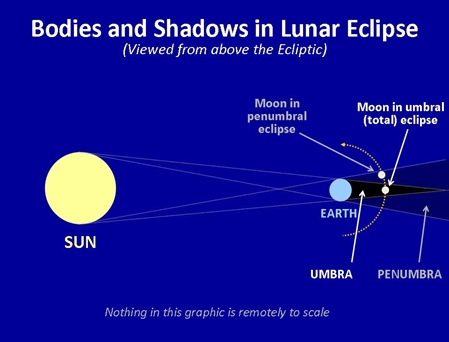 The second, way cool, stage is when the Moon enters the umbra, or region of complete shadow. The moon in this phase is a deep blood-red, which is cool in and of itself, but isn’t- in my opinion- the coolest, or even second-coolest thing about a total lunar eclipse.

The coolest thing is that, in the dimmer light, the moon looks really, really 3-dimensional, in a way that can’t be described until you see it. It’s like, you see the eclipsed moon, and there it is, this round ball in the night sky, and you suddenly realize that all the other times you looked at the full moon, it was just a flat disk. I can’t explain or describe it any better than that- you just have to see it.

The second coolest thing is to watch the shadow of the Earth crossing the moon as it enters (or leaves) the umbra. Because the curvature of the Earth’s shadow across the face of the moon shows you exactly how big* the Earth appears from the Moon, which assuming you won’t ever travel to the Moon**, is the best sense of the view you’ll ever get first-hand.

*Really big. The view must be awesome from up there.

**No flying cars, no moon-vacations, no robot-friends. This whole “Future Thing” has turned out to be a phenomenal disappointment, as I mentioned (OK, whined) previously in this post. Man, it is like I have a post for everything.

I’m setting my alarm for midnight*, on the off-chance it clears up enough to catch sight of the Moon. I’ll probably just look at the window at the cloudy sky and go back to bed, but if I do luck out, midnight to 1AM will be the best part of the show. I’ve seen 2 great lunar eclipses since I’ve been living in Utah; I’m bummed that I’ll most likely miss this one.

For those of you reading from afar- best of luck. I hope your weather holds up and that you have a spectacular show.

Weather forecast on the front range tonight is partly/mostly cloudy but hoping for a clear window - plan on checking at 12pm, 1pm and 2pm and then give up if it doesn't work out.

Hoping for a break in the clouds here in Vegas. I've traveled far for a solar eclipse, but not for a lunar eclipse.

That's the best idea ever!

An hour ago, I could see Jupiter, and saw the Moon before it hid behind clouds. We may still have a chance... I hope you catch a break too, W.

Sorry to rub it in, but it was awesome. I was in Philadelphia visiting in-laws and the forecast was for clear skies so I drug Drew out of bed at 3 AM and went out to the 20 degree clear, breezy night. We watched the moon go into the umbra and stayed until it was coming back out. Wish I had been able to stay awake for more.