Last week I mentioned in passing that I’d get around sometime to doing a post about inversions as soon as we got a bad one. Someone must have heard me. We’re in the midst of a really gross inversion, and so I guess I’m out of excuses not to blog about them. 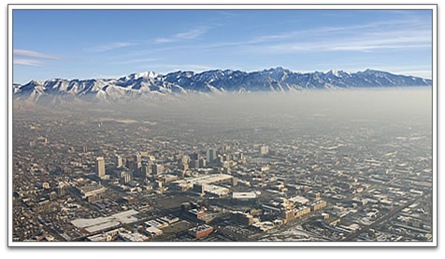 Saturday I had mountain bike fever, and everything’s snowed under around here, so I left the house before dawn and did 2 different rides out in the West Desert. The rides had me in and out of the inversion a couple of times. Today I’m going to do a brief post explaining what an inversion is, why they occur around here so often in Winter, and why they… well, suck. 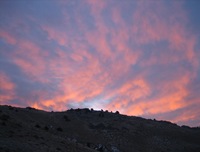 Tomorrow I’m going to explain the impact of inversions on trees in the Great Basin, and how they (inversions) make the Great Basin look the way it does not just when they occur, but all the time. Then- if I don’t get distracted, bored or simply flake out- I’ll do 2 more posts that zero in on one of the 2 trees most strongly impacted by inversions. Here we go-

Most of the time, in most places around the world, temperature and altitude work like this: for every 1,000 feet you go up, the temperature decreases by 3.6F. That’s why going up the canyons is such a pleasant escape from Salt Lake in the summer. But sometimes this temperature/altitude relationship gets inverted, with colder air down low close to the ground and warmer air up above, and this inverted state is called a (wait for it…) thermal inversion.

Thermal inversions happen all over the world. Los Angeles, Shanghai, Mexico City, London all get terrible inversions. In fact the polar regions in winter are under inversion most of the time. There are a few different types of inversions with different causes. For this post, I’m focusing just on the causes of inversions in the Great Basin. The cool air is dense and so it doesn’t rise; it sinks, hugging the floor of the valley. When the weather is “nice”, with clear skies and high pressure, warmer air in the sky above, the warmer air sits on top of the cold air, which can’t rise, holding it in place in the valley below. During an inversion, freezing water vapor from a water source- such as snow- is produced by evaporation (technically sublimation if directly from snow.) The water vapor can’t rise up to dissipate or form clouds or whatever, and instead and fills the cold-air layer with a chilly mist. The damp air serves to amplify the chill, especially for us Westerners, who are accustomed to a ”dry cold.”

Side note: Utah Lake provides a ready source for such moisture, which is why Utah County, which basically encircles Utah Lake, so often goes on “Red Air Alert” before Salt Lake County, which lies at a bit more of a distance from Great Salt Lake, despite having far more cars driving around. 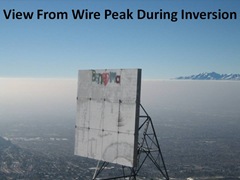 In a valley ringed by mountains, like Salt Lake, or Cache or Utah or Tooele valleys, the effect is worsened because there’s no “open wall” for the cold air to escape through without rising.

Inversions are completely natural. They happen throughout the Great Basin, and have been doing so since long before people showed up. What’s not natural is a million people driving cars back and forth for a week in a single valley during an inversion, and that’s where inversions become unhealthy.

Automobile exhaust fills the air with nitrous oxide (NO), carbon monoxide (CO), and various hydrocarbon compounds. Under normal conditions, the warmer air near ground-level continually rises, carrying these pollutants upwards with them to a higher altitude where they can be dissipated by winds.

But in an inversion they don’t go anywhere; they just sit and stew. And by stew, I mean that sunlight acts on them to produce various chemical reactions that produce ozone, and a whole slew of nasty compounds, such as peroxyacetyl nitrate (PAN, chemical diagram right). These compounds are known as secondary pollutants, as they’re not the stuff that comes directly out of your tailpipe, but rather the result of the sunlight-fueled reactions between the tailpipe emissions and other stuff in the atmosphere. 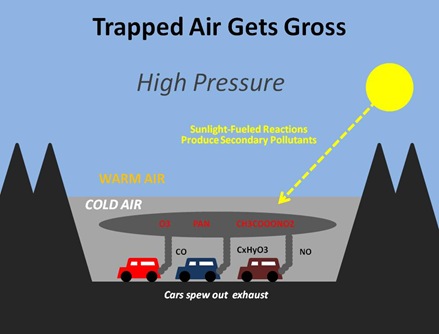 Strong oxidants, such as ozone (O3), irritate mucous membranes, including eyes and lungs. Irritated lungs can stress hearts. Some of the other nasty hydrocarbon-derived molecules produced are worse, even carcinogenic. This is why the weather-guy tells you not to run or bike outside during a bad inversion.

Tangent: I do so anyway. Outdoor exercise is extremely important to my mental health. I figure I’d rather live 50 happy years than 80 morose ones. But do what I say, not what I do.

There are other sources of pollutants that contribute to bad air conditions during inversions, but cars account for the lion’s share by far. The air quality effects are exacerbated by thin air, which is a by-product of altitude, which is why 8,000-foot high Mexico City suffers so terribly from inversion-produced smog. At ~4,300 feet, the altitude is also a factor in Salt Lake’s inversions.

For about a decade I went through a succession of watches with built-in barometers, altimeters, compasses and altitude logging computers. Then at around age 40 I realized I really didn’t need to know every time I changed 100 feet in elevation- and it wasn’t like the watch could actually do anything about the altitude- like change it or anything. Now I just wear a watch.

So now we know what causes inversions and why they suck, and why we really shouldn’t be driving during them. But before I wrap it up and link inversions to trees, here’s a cool bit of inversion trivia.

The cold air/warm air boundary in an inversion acts as a refractive/reflective transition barrier on waves, such as electromagnetic waves. I talked about refraction and reflection when I explained how a rainbow works back in August. I won’t repeat the explanation here, but check out that post if you want to understand how refraction works. 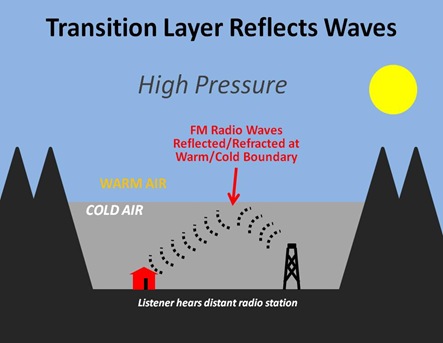 FM radio transmissions sometimes are reflected off the boundary, then sometimes off the ground, then off the boundary again, and so on, allowing your FM radio to pick up transmission from a station dozens, even hundreds, of miles away. This effect doesn’t manifest itself much in a fairly small valley like Salt Lake, but occurs pretty often in a huge valley, like California’s Central Valley (which has awful inversions.)

A similar effect can happen with light, leading to a type of image known as a Fata Morgana, which sounds like a character out of Lord of The Rings, but is actually just a fancy-sounding word for a mirage. Fata morganas are most often seen under conditions combining inversions and far horizons, such as the ocean. Ships, icebergs and islands all can be the subject of them, and the fata morgana can actually make one of these objects visible even when it would otherwise be hidden by the curvature of the Earth.

The same effect can occur not only with electromagnetic waves, but with shock waves. And in fact just such a shock wave reflection happened in what is today Kazakhstan in 1955, when the Soviet Union conducted its first successful test of a hydrogen bomb. The shock wave from the blast was reflected back from the inversion-boundary, killing 3 observers on the ground.

Next Up: So what do inversions have to do with trees?

In the spirit of tomorrow's historic inauguration, I'm going to take a shot at the "What do inversions have to do with trees?" teaser and say that the question really should be, "How do trees cause inversions?"

And the answer comes from America's future 40th President, back in 1980: "Trees cause more pollution than automobiles do." In 2003, this quote came back into the news with some unexpected headlines, e.g.: http://www.cbsnews.com/stories/2003/03/17/tech/main544188.shtml

Whoops, try this link instead.

Really, a couple of huge fans mounted on the tops of those moutains outta take care of this.

Thanks for the great info -- depressing but interesting! I live here in the Salt and am hating this current inversion. Care to share the location of your west desert trails??? I've got a major mountain biking jones and no time to drive south. Thanks!

Great link, Phil O, and thanks for an interesting post, Alex...

Phil- excellent link, thanks. An outstanding contribution to Grown-Up Month!

Jenni- everyone here in UT has been kidding around about those fans like forever. Someday they'll probably do it. Don't laugh- they built pumps to drain the lake next time it floods (pics in this post.)

Laurel: I'll have your ride beta in tomorrow's post, but mind the mud warning. Ride out there when it's frozen or not at all.

Interesting post! Because we've gotten so little snow out by the UT-NV stateline, we haven't had an inversion problem yet this year--but we are having a drought problem.