A Beautiful Alien And A Deadly Native

Remember about a week and a half ago I went on about how it was the best, greenest, lushest time of year in the foothills, right then? Look up- it’s over. Though the foothills are still beautiful and interesting, the peak green/lushness has passed. Already the open slopes have begun to acquire a brownish tinge, and with the rising temps and sunny long-range forecast, they’ll be getting steadily browner in the weeks to come*.

*Not unlike my lawn, which for a plant guy I am almost stunningly inept at maintaining…

Tangent: What’s that? You didn’t get up in the foothills over the last week and a half? Then let this be a lesson to you: when I say, “go check such-and-such out right now…”, I mean right now. What, do you think I’m kidding around? I’m on a Plant-Jihad here, and when I say “go” it means “go”!

But just because things are drying out doesn’t mean there’s not a bunch of cool stuff going on in the foothills. Sunday afternoon I dragged the Trifecta out on a Wildflower hike* across from the zoo (pic right = Twin A atop Death Climb Peak), and found 2 new cool wildflowers; one of them a surprise, the other I’ve been keeping an eye out for a while for.

*Awesome Wife came along too, though mostly what we saw of her was her backside in the distance. AW has been hiking several mornings a week and has turned into a Human Rocket, leaving us mortals scrambling to keep up.

Tangent: When you’re young and childless, you imagine that when you have children, they’ll share your interests and tastes. You imagine that you’ll be a wise, caring, got-your-shit-together parent and that your children will come to delight in the same activities you delight in. If you’re an outdoorhead, like me, you imagine that together you’ll go for long hikes, stopping to explore flowers and birds and such, all the while relating to each other in a generally quasi-zen-like air of mutual satisfaction and appreciation of nature.

As all parents know, it’s nothing like that. Kids aren’t little robot-clones of their parents; they’re their own little people, and chances are that whatever you find so utterly fascinating, they will find BORING. And this boredom will manifest itself through whining (if you’re unlucky) or distraction (if you’re lucky.)

Nested Tangent: I don’t know why this was a surprise to me; the evidence for it had been right in my face for decades. When my sister- let’s call her “Elizabeth”- and I were children, our parents used to drag our little butts all over Northern New England on “antiquing” outings. Yes, “antiquing” is a verb. It means “to drive from one dilapidated old barn to another, looking at a bunch of old crap that some rural guy never got around to taking to the dump.” Seriously, you can’t imagine how boring this was. We’d pull up to yet another barn, and our parents would be like, “Oh my, I wonder what interesting items they’ll have here?” And Elizabeth and I would be like, “We can tell you right now what ‘items’ are here- a barn full of some farmer’s old shit, that’s what*.”

*OK we didn’t really say that, but that’s pretty much what we thought. 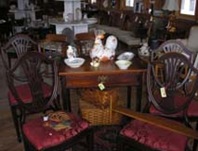 Our antiquing torture/expeditions finally tailed off following the arrival of our caboose-brother- let’s call him “Phil.” Phil was terribly susceptible to carsickness, which was particularly problematic on twisty New England roads. For a while our parents forged ahead, but I think they finally admitted defeat one summer afternoon in Sherburne, Vermont. As we drove slowly down Main Street, Elizabeth and I held Phil out the window as he vomited all over the side of our 1974 Dodge Dart. We were looking for a place to stop for lunch at the time. My parents kept driving (in embarrassment) right on out of Sherburne, and to my knowledge haven’t returned since.

The Trifecta will stay mentally engaged on hikes that are exciting, like slot canyons, or scrambly little peaks, but on just nature-y walks, they tend toward distraction. On Sunday’s hike, Bird Whisperer and Twin A kept up a constant pratter concerning various Pokemon characters, their attributes and so forth. Twin B (pic right) hikes in her own little world, thinking her own thoughts, always falling behind, despite my endless mountain lion scare-stories.

The first new flower I saw was this guy (pic left). Wow! What a great looking flower: composite, ray-only flowers, like a Dandelion, but with neat little reddish-brown streaks in the center. And look at those sepals- long, slender, sharp and elegant, just like those in my logo! I couldn’t wait to get home and ID it.

And when I did so, I found to my chagrin* that it’s one of the most widespread and common aliens (weeds) in North America: Yellow Salsify, Tragopogon dubius. The Salsifies, or Goatsbeards are a broad genus native to Europe and Asia. T. dubius occurs naturally from France to India, and as a weed throughout North America. But although it’s a weed, there are at least 2 cool things about it, the first of which is just how darn good-looking it is.

*I hate the feeling of embarrassment that goes along with learning that a cool new flower you’re all amped up about is an exotic weed. It’s sort of like if you were young and single and you met a really nice girl, and you really, really liked her, and you told your friends and your parents all about her, and then you find out she’s really a man…

But the second relates to something we talked about yesterday up around Kimball Junction. In that post I mentioned that Cutleaf Balsamroot is suspected to have originated as a hybrid between 2 other species of Balsamroot, because of its strange morphology and genetic makeup. But the truth is we have no way of knowing for sure. Cutleafs were around long before any botanists showed up in North America, and so the hybrid origin theory is ultimately uncertain.

But with Salsifies, botanists have seen hybrid speciation really happen, right here in North America over just the last couple of centuries. 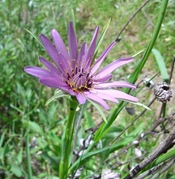 Since European settlement, 3 species of Tragopogon have become widespread weeds in the US: Yellow Salsify, Meadow Salsify, T. pratensis, and Purple Salsify, T. porrifolius (pic left, not mine). But in the 1950’s botanists discovered 2 new species of Salsify, not found in the Old World, that occur where combinations of these 3 invaders overlap in the US. T. miscellus is a hybrid of Yellow and Meadow; T. mirus is a hybrid of yellow and purple Salsify. As both miscellus and mirus are chromosomal tetraploids*, neither crosses with its original (diploid) parents and both now form large, independent populations (and species.)

*For explanation of polyploidy- which is geeky but way cool- see this post.

Side Note: Interestingly, while hybridization has long been recognized as a “valid” path to speciation in plants, it traditionally has not been so recognized with animals, and this is one of the big disconnects between botany and zoology, which Christopher recently highlighted in his fascinating post discussing the evolution of dogs over at Catalogue of Organisms.

But the second flower was a native, one that I’d been keeping an eye out for for a while.

Once of the things that I think keeps a lot of guys from getting into wildflowers are their generally wussy names. “Yellow Fritillary”, “Baby’s Breath”, “Queen Anne’s Lace”- who came up with these? It’s as though all the plant-naming got done by a half-dozen little old English ladies while they were having tea. If wildflowers had more “manly” names, maybe more guys would be into them.

Foothill Death Camas, Zigadenus* paniculatus, is one of 3 flowers called “Death Camas” here in Utah. It’s well named, as consuming its blubs, stems, leaves or pretty much any part of it can bring on drooling, diarrhea, convulsions, coma or even death in both livestock and humans.

*The genus is being revised based on recent molecular studies. The new genus name may end up being Toxicoscordion.

You’d think that people would avoid eating a plant like this, but unfortunately Z. paniculatus bears an at least passing resemblance to some species of wild onion. Even in the last decade, Utahns have been hospitalized for Death Camas-poisoning.

Those are the 2 flowers I wanted to highlight today, but I’ll throw in a little bonus extra for mtn bikers. Down by the mouth of Dry Creek, where Shoreline trail, as it’s heading North, drops down to the mouth of the canyon, there’s a little Northern-exposed sidehill bypass trail. 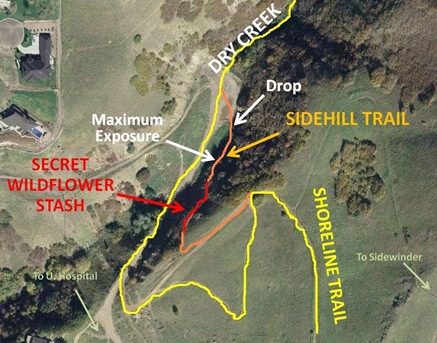 It’s narrow, exposed and spooks a lot of riders, but it’s not really technical- you just can’t dab. It’s a fun little thrill before starting the climb up Dry Creek, and if you’re cool with exposure I recommend it.

But the bonus coolness about this little side trail is the secret wildflower stash up top.

This section, before you emerge from the oaks, always has interesting wildflowers, often of types that you don’t see almost anywhere else along Shoreline. Here’s a quick example: this guy (pic left) is a Penstemon, probably Wasatch Beardstongue, Penstemon cyanthus. (But also possibly Showy Penstemon, P. speciosus. I need to re-check it.)Penstemons are called Beardtongues for that funny little protuberance on the bottom that looks like a long, narrow tongue. It’s a staminode, which is an infertile, or non-pollen-producing stamen. The flower has 4 other shorter stamens, all of which are fertile/pollen-producing.

Anyway, there’s usually something cool in here, and at a minimum the sidehill and the drop will get your heart rate up a titch before you start climbing.

While I know you're smart and I'm sure your sister is too, Phil is the genius in the family. Why didn't you one of you come up with the car sickness idea?

I rode the draper race course last night and noticed that the gambel oak are almost fully leafed out now. (And these new leaves are soft.) I saw some Indian Paintbrush and Larkspur, among many other flowers. The names are starting to stick. Still lots of flowers and interesting plants to see in Corner Canyon.

Phil- good summary. If I ever move back to the homeland, I'm opening an antique-barn/gay wedding chapel that serves soft ice cream.

Kris- you're not telling us anything new. We've long known Phil has all the brains in the family. He's smarter than Eliz & me put together, but squanders his Einstein-like intellect delving into the trivia of loser-bands from the 80's. Some day he will stop listening to Big Star and Television (the band, not the appliance) and cure cancer.

On a serious note- I dodn't know there was Larkspur down around South Mountain. I need to get back down there again. Thanks for the beta.

Uh oh, now I'm doubting my Larkspur ID. As I looked at your photos the flower I saw was a lighter blue, but I thought for sure I spotted the spur. However I saw it about 15 feet away from the trail and didn't take the time to get off the bike and look closer (yes, lazy). I'll see if I can get up there again this week with a camera.