Flight Of The Virgin Queens

This is going to be a quick one today, as I have a lot going on. Usually I don’t like to do a post unless I’ve got some good science to flesh it out, but this is another one of those timing things- if I wait a week or two, it may be old news.

Tangent: I’m wiped. About 2 weeks ago, I remember thinking “Wow, I feel great. I don’t remember ever feeling this strong and healthy.” I was riding every day, felt super-strong, had tons of energy for work and family stuff and blogging and even though I was only averaging ~5 hours/night of sleep, I felt great.

This activity level- working, biking, blogging and 4-wheeling with German tourists on little sleep- appears to have finally caught up with me. Yesterday morning before work I rode up toward Big Mountain Pass with my teammate Jason and felt like my legs were made of lead- I just had no “zip.” It’s tough because there’s so much going on right now that it’s hard to let a day pass without a big ride, a post, a hike with the family, and sometimes all 3. I’m looking forward to a little break… 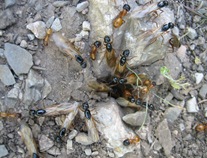 Over the last week or so, you may have come across winged ants. These are drones and queens out for their mating flights. Every Spring millions of winged ants emerge from their nests to seek mates, and-if all goes well- ultimately found new colonies.

On Sunday’s wildflower hike Bird Whisperer yelled for us to stop and check out some ant-holes*. At 3 adjacent holes, winged queens/drones were piling out, assisted/herded by bunches of workers.

*This is a great example of how kids can be so wonderful and annoying at the same time. I was hiking 20 feet ahead, and BW and Twin A were babbling on and on about Pokemon, and I’m thinking, “Man, why can’t they pay attention to all the wonderful stuff around them instead of those stupid cartoons?” And right then BW spotted the cool ant swarm I’d just walked right on by while stewing about them not paying attention. I am a dork.

Side Note: I don’t know the species- don‘t have an ant guide. There are several thousand species of ant. That’s right, there are at least twice as many species of ants- just ants- as there are species of mammals- all mammals- in the world. But I know at least one entomologist reads this blog- Hey Ted, any idea what ants we’re looking at? These shots are in the foothills immediately East of Salt lake City, probably ~5,200 -5,400 feet, alongside a trail running up a ravine lined with scrubby Maple and Oak.

Ants belong to the order Hymenoptera, and like other Hymenopterans- bees, wasps- are haplo-diploid, meaning that males (drones) have only ½ the number of chromosomes as females (queens, workers) and no fathers. If you’re interested (and you should be, because it is Totally Way Cool) I explained it all back in my first bee post last year.

Tangent: Haploidy is also a defining characteristic of mosses and ferns (at least the gametophyte generations, which are the ones we think of as “mosses” and “ferns”.) If you’re interested in the weird haploid genetics of these guys (which are, again, Way Cool), check out this post.

This exit/swarm/flight happens just once a year. Here’s a video of the newly-emerged ants swarming around the colony entrances.

The queens and drones take off, and then seek mates. The mating happens in the air, like with bees. Following mating, the drones soon die, usually within a week or so. The queens of some species mate with multiple males, while those of other species mate with just one.

Tangent: As similar as this sounds to the mating mechanics of bees, there’s an important difference. With bees, the male genitalia are ripped out of the male (and remain attached to the female) upon mating. The dismembered drone falls to Earth, dying quickly. With ants to my knowledge this isn’t the case; they just wander about for a bit and die, their brief life mission fulfilled.

With bees, the reason mating can only take place in air is that significant wind-flow is required to expose the genitalia. I don’t know if this is the case with ants. 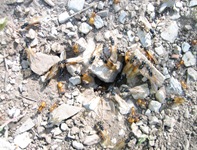 The impregnated queen seeks to establish a new colony. The odds of her doing so are dismally low, and only the teeniest tiniest fraction of queens do so successfully. These mating flights are a big feast for many birds. The ants are slow, clumsy fliers, bigger than workers, and make nice little meals.

When the new queen picks a location and parks it, the first thing she does is chew off her own wings*, then starts laying eggs, initially about 1 per day. 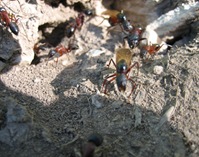 After about 60 days, if all goes well, the first eggs hatch, and the new workers immediately start foraging for food. During these initial 60 days, the queen survives by metabolizing her now-unneeded wing muscles, and in a pinch, may eat an egg or two. It’s tough being a single mom. If and when the fledgling colony makes it up to about 10 workers, they begin feeding the queen and caring for eggs. If all goes well, the colony will have several dozen workers by the second year. Throughout her life (maybe 20+ years or more) as the queens lays eggs for (diploid) workers and eventually (diploid) queens, she fertilizes them with sperm she’s stored from her mating flight.

*This detail always bugged. She chews off her own wings! I know she won’t need them and all, but still- wings! If I had wings I would so never chew them off. It just seems like such the ultimate option –limiter, like Cortez burning his ships, or- on a more mundane note- the guy who gets married and sells his motorcycle.

(For the record, I did not sell my motorcycle following marriage. I sold it in between marriages. Not sure what the home-front response would be if I shopped for another today, though…)

Anyway, this is the time of year it happens around here and it’s cool to watch, so keep an eye out for it.

I’ll be off-line for a few days; the Watcher Family is off on a desert adventure for the holiday weekend. I’ll blog about it when I get back, but plans include 4 states, ruins, Indians, camping, hiking, a motel pool for the Trifecta and a dawn MTB ride or two for Dad. Have a great long weekend.

Special Note to Prospective Burglars: As always, my other brother- let’s call him “Ray”- is staying at the house while we’re gone. He’s bringing his “puppy” Cujo, and plans to have a few of his NRA friends stay over as well, and a couple of the guys he knows from back in prison may be stopping by too. Good times.

See, that's the thing about being an entomologist - everyone thinks you know what any bug is, even though "specializing" in insects, in fact, means that you're only interested in just over half of all known life forms (and an even greater proportion of those that are unknown). Anyway, within insects I specialize in beetles - which I guess means I should be able to identify about one out of every four known life forms.

Seriously, Alex sould be the one to tell you what these ants are.

I'm so not chewing off any of my body parts!

Wow, I just re-read that, and I sound like an arrogant jerk. Please excuse the poor attempt at humor - I guess I'm not as funny as I think I am sometimes.
regards--ted

Ted- no worries, I didn't read any 'snark' at all in your comment! You're suggestion to ping myrme-Alex is a good one. I'll try him when I'm back in town/online (on bberry now.) Thx!