Dry Foothills, 3 Big Stalks, and I Am Dying of Flu

So I didn’t do a ride yesterday, because I am pretty certain that I Am Dying Of Flu. Seriously, shakes, shivers, headache, cough, this is it. Do me a favor: if I keel over in the next few hours and you know me and come to my funeral, tell Awesome Wife that you really enjoyed this blog and it wasn’t a total waste of time.

So I’m going to use this post to catch up on some new things blooming in the foothills that I saw when I rode up there last Thursday before work.

*It’s not something I’d planned on blogging about anytime soon, but I feel a certain pressure to honor the request, particularly since if I find myself in need of any of his expertise** I could see myself calling back the favor.

** Never met the guy, but from what I hear, yes, that is his area of expertise.

Planning For The End

But first I’m going to whine about how awful I feel. Last evening I was pretty sure the end was in sight. I sat down with Awesome Wife and gave her careful, well-considered instructions for when I’m gone.

Me: Don’t marry an old guy.

Me: Whatever. Don’t marry an old guy after I’m gone.

AW: What do you care what kind of guy I marry after you die?

Me: I just don’t like the idea of some old guy sleeping in my bed, passing gas in my house and using all my stuff. Marry a young guy.

AW: So then a young guy would be sleeping in your bed and using all your stuff- what’s the difference?

Me: Young guys have better control over their flatulence.

Me: OK, well just promise me this- that on an ongoing basis you’ll make awkward, inappropriate comparisons between me and your next husband.

Me: Oh, I don’t know. Maybe something like, “Huh. That’s funny. My first husband never suffered from erectile dysfunction…”

Here’s the thing about the foothills. In the Spring I’m totally in love with them. I like them in the Fall too, and even in the Winter when the ground is bare but the trails frozen. 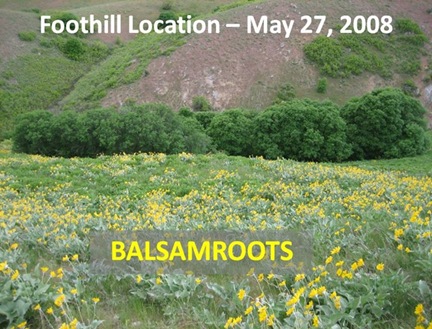 But they just don’t do it for me in the Summer. By mid-July there’s so much going on and growing and blooming up above 7,000 feet that I come home from every ride just totally in love with the world, with a big grin on my face. 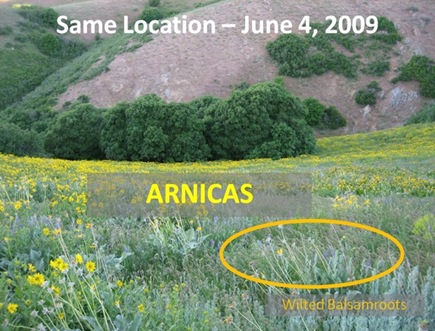 But the foothills in July are brown and dusty, the wilted grasses and shrubs a sad reminder of the explosion of green just 6-10 weeks earlier. 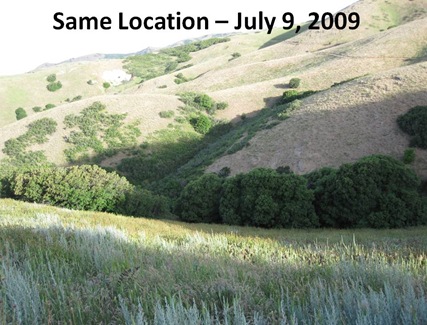 I always seem to return from Summer foothill rides parched and beat, even if the temps were cool and the ride easy. It’s a mental thing.

Side Note: The obvious question is: So why do I ride the foothills at all in the Summer? Convenience. I can pedal onto Shoreline from my house. 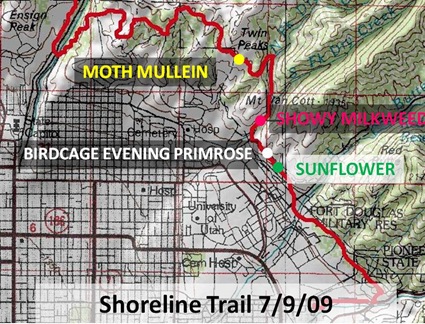 And that’s a shame, because throughout the Summer the foothills continue to change, and in fact on Thursday’s ride I saw 4 new wildflowers, 3 of them Big Stalks. 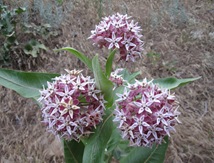 Riding up the lower part of Dry Creek right now, you may see a few of these down in the gully. It’s Showy Milkweed, Asclepias speciosa (pic left). This is the first Milkweed we’ve looked at, though I’ve referenced this family a couple of times previously, specifically the class of defensive chemicals it produces- cardenolides- to ward off predators, and 2 animals that have evolved immunity to these chemicals. The first was Monarch butterflies, who use Milkweeds as a food source, and ingest the cardenolides themselves, making themselves in turn unpalatable to predators. Second was the Black-Headed Grosbeak, who regularly dines upon- you got it- Monarch Butterflies.

There are about 140 species of Milkweed. They’re part of Apocynaceae, the Dogbane family, and not particularly closely related to anything we’ve looked at previously. Showy Milkweed occurs throughout Western North America, and is arguably the most attractive and dramatic of the Milkweeds around here. Check out these flowers! (pic right) The 5 petals have an elegant cup-like shape, and the 5 stamens arc gracefully toward the center. Even the sepals are colorful and attractive. This bent-downward shape of the sepals is called reflexed. The plant is a leafy stalk, 3-4' high, with 3 – 6 spherical umbels, each bearing a couple dozen or so flowers.

Tangent: Right after this I stopped for another photo. Now I had planned a mellow, easy ride (with a race coming up in just 48 hours) to the top of Dry Creek and back. But just then I heard a couple of riders behind me. As I started pedaling again, I heard them closing on me, and my weird, permanently-stuck-in-adolescence competitive instinct kicked in and I started hammering, clear up beyond the overlook and to the highpoint of Shoreline Trail. Which meant of course that I ended the ride both beat and late for work. Why do I do that? I didn’t even know these guys. Why on Earth should I have cared about getting “caught?” I am an idiot…

Well, my idiocy at least brought me up to the next bunch of big stalks, up around 5,700 feet. This guy is Moth Mullein, Verbascum blattaria (pic left). It’s one of 2 common mulleins in Utah, the other being Wooly Mullein, V. Thapsus, which has a similar stalk-profile, but with hair-covered leaves almost all the way up the stalk, and the flowers bunched up right at the top. Mulleins are exotics, native to Eurasia, and have long since colonized their way across nearly all of the lower 48 states*

*Woolly Mullein is in all of them. Moth Mullein is (strangely) absent from Wyoming and Minnesota. Go figure.

Tangent: I should mention that one the way up, I passed through one of these wonderful shady draws, full of Maple and Scrub Oak, that are such welcome oases in the summer foothills (pic right). Cool air pools in them overnight, and they hold just a bit humidity, providing a delightful wake-up snap on morning rides.

Mullein is a biennial, meaning it has a 2-year lifecycle. The first year it’s a low, little mini-shrublet that doesn’t flower, but builds up energy and structure for year 2. In the 2nd year it shoots up its signature stalk, flowers, seed, and… dies. That’s it. This stand won’t be here next year- or rather the stand will, but the individual stalks will not.

This is in contrast to Showy Milkweed, which is a perennial. Unless it gets trampled or otherwise trashed, it’ll pop up in that exact same spot next year.

Tangent: Here’s something else about Mullein: the leaves, when smoked, supposedly relive bronchial congestion in early respiratory infections*. And in fact yesterday, miserable as I was, I actually toyed with the half-baked idea of pedaling my sick, dying ass up to 5,700 to collect some leaves**.

*This may be just for the Woolly Mullein; I’m not sure.

**Do they still sell rolling papers in convenience stores? Been a long time since I, er, “rolled” anything…

Back down lower, on the way home, I passed the third big flowering stalk of the ride: Common Sunflower, Helianthus annuus (pic right).

Side Note: There was actually a 4th Big Stalk on this ride, the Evil Death Weed Musk Thistle. But since I blogged in detail about that sinister exotic last year, I’m omitting it from this post.

This guy is the classic, prototype composite flower, and so closely-related to many of the yellow composites we’ve looked at previously, Balsamroots and Mules Ears in particular. I love these flowers- take a moment and check one out close-up next time you run/walk/pedal past a stand. Each one of those little, 5-pointed yellow stars in the center is the stigma of an individual flower. The beauty and complexity of these guys never fails to impress me. 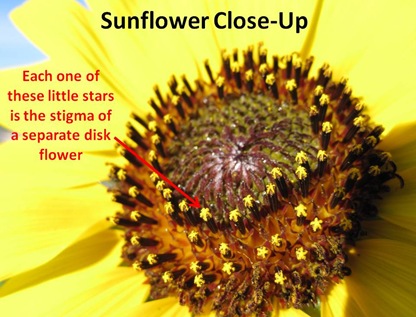 Sunflowers are different from the 2 previous Big Stalks in tat they’re annuals, meaning that they go from germinating seed, to mini-shrublet, to towering/flowering stalk to seed to death in just one short growing season. Which is pretty impressive, given that they grow up to six feet in height. This plant does not screw around.

Sunflowers are generally thought of as “weeds”, and so you may be wondering- native or exotic? To which the answer is sorta-kinda both. The Sunflowers you see here are natives, but commercially farmed Sunflowers are the descendants of Sunflowers that were brought back to Europe a couple centuries back and specifically bred to have One Big Head* as opposed to the multiple smaller heads of the native variety.

*Awesome Wife says that I also exhibit this characteristic.

That’s it for stalks, but I want to highlight just one more flower- this one a non-stalk. Yes, I know, you’re thinking, “You’ve already showed us that guy- it’s Tufted Evening Primrose!” But it’s not. Look closely- the leaves are different- simple narrow and un-lobed/spiked. The X-shaped stamen is smaller, notably less obvious. And the 4 white petals are smooth, not crinkly. It’s Birdcage Evening Primrose, Oenothera deltoides, so named because it’s post-bloom dried-out stalks collapse inward, forming a little “cage.”

I almost didn’t look twice at this guy, and a year ago I probably wouldn’t even have noticed the small differences. Even in the dry, parched dusty summer, the variety of foothill wildflowers continues to amaze me. OK, gotta get back to work on my will. I wonder who I should leave my awesome pine cone collection to?

In the future could you put all cycling related comments and posts in a unique font/color? That way I can skip over the stuff that's making me smarter. I'm worried that when I explain to my wife that the chipmunk she is pointing out to the kids is really a squirrel that something really bad is going to happen shortly thereafter.

Hmm. Sounds like your wife needs to start reading my blog. :^)

Maybe this will help: If you just skip everything in my posts except the tangents, graphics and excerpted dialogue, you won't get any smarter. But after a while, you might start to get weirder. Pick your poison.

"You're not dying, you just can't think of anything better to do."

Deny the "I'm dying" conversation and blame it on the medicine.

Btw, I could have done without your attempts at humor. I come here for enlightenment, not laughs. :)

Aristata- thanks for the typo catch.

>Btw, I could have done without your attempts at humor…

You’re reading the wrong blog. Try a little googling; you’ll find plenty of very serious, very not-funny, botany-related sites/blogs, some number of which will surely better match your tastes. Thanks for stopping by and good luck.
:)

Just found your blog and am loving it. Entertainment and enlightenment all in one! Who could ask for more?? I've just been going through random old posts and thought I'd throw down a comment to let you know I am loving the blog!

Hey Sarah, glad you like the blog. I like to tell myself I'd do this even if no one read it, but truth is, it's nice to hear someone reads/likes/gets it every once in a while. Thanks!