I’m going to shift gears here and drop nearly 6,000 feet from yesterday’s post. This post- like the last valley-based post I did, on Cottonwood seeds- is something I meant to blog about last year, never got around to, and so included it on my “If I continue this project for a second year, this is one of the things I need to blog about” list. It’s the second year, I’m still blogging, and it’s blooming again, so now’s the time. 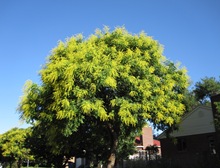 It’s been almost 5 weeks since I blogged about what’s going down in the valley, and things have changed a lot since then. The temps are starting to break into the 90’s regularly, Awesome Wife is regularly shuttling the out-of-school-Trifecta to the pool, and hillsides (and select patches of our lawn) have faded to brown. The last of the flowering trees stopped blooming 6 or 7 weeks ago. Until last week. Every year in July, there’s a tree that blooms all over my neighborhood, and in neighborhoods all over Salt Lake Valley. If you live along the Wasatch Front, you’ve probably noticed it already.

It’s the Goldenrain Tree, Koelreuteria paniculata. People plant all kinds of crazy exotics all in neighborhoods all along the Wasatch front and throughout North America, but the Goldenrain tree is really exotic. It’s native to Korea and China, and it’s one of the very few trees in North American suburbs that blooms in July. Koelreuteria is a genus of just 3 species, all native to East Asia. It’s closest (not very close, really) native Utah relatives would be our Maples- Bigtooth, Rocky Mountain and Box Elder; both genera belong to Sapindaceae, or the Soapberry family. Every year, during the first 2 weeks of July, the row of gloriously blooming Goldenrain trees along 900 South is the first thing I see on my morning drive to work, and the nearly last thing I see on my drive home. It’s bright, garishly exotic and beautiful- I just love it. 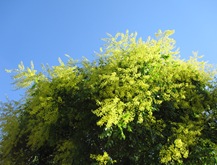 I don’t know what evolutionary pressures in the Far East led to a tree that blossoms 2 months after nearly everything else, but it seems to be doing well here. In the Eastern US it’s escaped cultivation and become an invasive (similar to our own Russian Olive, also on my Year-2-Need-To-Blog-About list.) When I stopped for these photos the flowers were abuzz with bees*.

*Only small, wild bees, so far as I could tell. I didn’t see any Honeybees, though they’re common in the gardens of our neighborhood.

Tangent: Yesterday I stopped on the way to work, pulled over and spent about 10 minutes checking out a couple of these trees in my ‘hood and taking photos. For several years I’ve been known as “the Bike Guy” in my ‘hood. People will meet me at the neighborhood summer BBQ and say, “Oh yeah, you’re the Bike Guy!” because they usually see me rolling past their window at 6AM or so.

Nested Tangent: Speaking of evolution, know what’s evolved in a great way over the last several years? Our Neighborhood Summer BBQ, that’s what. When we moved in, the BBQ was kind of, uh… dorky. We’d open with a prayer (yes, it felt a bit like the ward), ate hot dogs and jell-o, and then a bit later did a patriotic sing-a-long, like “America the Beautiful” or something. But each year it’s gotten a little cooler, and this year it was great. There was a (almost-hip*) band, the food was catered by Rico’s Tacos, and there was even- get this- a discreetly-placed cooler of beer for non-members! My neighborhood is getting so cool- if this keeps up in another 5 years we’ll be mixing martinis and conducting gay wedding ceremonies at the Summer BBQ!

*Yeah, still a little bit dorky, but getting there…

But over the last year+, I suspect my neighbors are beginning to refer to me as “That Weird Guy Who Stops to Take Pictures of Plants”, as I’ve pulled over bike or car countless times and jumped off/out to snap shots of their Pear trees, Austrian Pines, Magnolias and whatever else I was blogging about at the time.

Hey, like I always say, every middle-aged man needs a hobby.*

*And this one is far less hassle, worry and expense than the Argentine mistress/soulmate.

All About Leaf Structure

Other than its unusual bloom time, there are a couple other things to note if you stop to check out this tree. The leaves are pinnately-compound. I’ve used the terms “pinnate” and “palmate” a bit without ever defining them, so I guess now’s as good a time as any.

A pinnate leaf is one in which the veins, lobes, and/or leaflets all attach to a central axis. Elm and Oak leaves are 2 good examples. An Elm leaf is pinnately-veined, while (many but not all*) Oak leaves are pinnately-lobed. 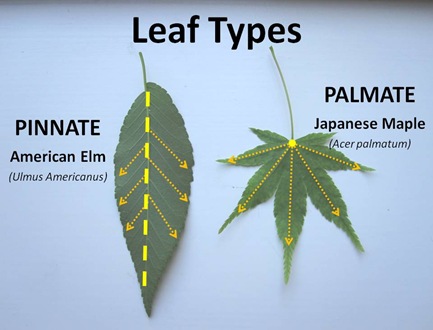 A palmate leaf is one in which the veins, lobes, and/or leaflets all radiate from a single point, like a Maple leaf*.

*Gambel, White, Northern Red and English Oaks for example all have lobed leaves. Shrub Live (Turbinella) and Blue Oak are among those with non-lobed leaves

Good so far? OK, now either pinnate or palmate leaves can be compound, meaning that one leaf consists of multiple little leaves, called leaflets. Though a compound leaf looks like a bunch of little leaves, it’s actually one big leaf in which the gaps between the lobes extend all the way down to the middle vein, which is called the rachis. So what at look at first glance like leaves on a Goldenrain tree are actually leaflets, one at the end of the rachis, the others branching off along its length in opposite pairs. Goldenrain leaves are oddly compound pinnate, meaning that there’s always a terminal leaflet at the end of the rachis. 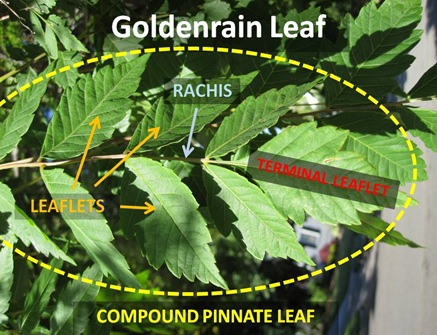 Side Note: Horse Chestnut would be an example of a tree with compound palmate leaves.

The structure of the flowers is also interesting. While the flowers themselves are fairly “standard” looking little yellow 5-petaled things, they’re borne on structures called panicles, which are compound racemes. We most recently saw racemes when we looked at Chokecherry flowers. A panicle is like a raceme with smaller secondary racemes branching off of it, each one bearing lots of little yellow flowers. 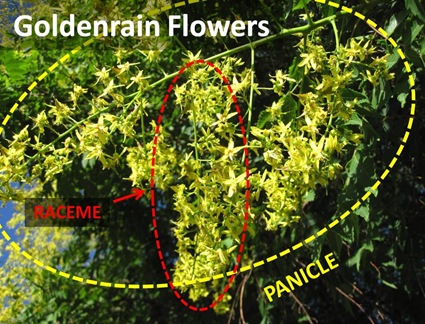 Although they’ve been present in North America only for about a century or so, Goldenrain trees have already been at the center of a little evolution-in-action drama. Across broad areas of the South, their seeds are preyed upon by the

Soapberry Bug*, Jadera haematoloma, (pic left pulled off bugguide.net) which penetrates the fruit-wall with its beak, liquefies and then sucks out the seeds inside. J. haematoloma’s native host is the Soapberry tree, Sapindus saponaria**, but it’s adapted to prey upon K. paniculata since its introduction to North America.

*J. haematoloma is a True Bug, which I explained when we looked at Box Elder Bugs. Which by the way these look a lot like…

**Soapberry trees don’t occur here in Utah. They make it as close as central Arizona.

But here’s the cool thing: The Goldenrain fruit-walls are about a millimeter thicker than Soapberry fruit-walls. And it turns out that the beaks of Soapberry Bugs found on Goldenrain trees are nearly a millimeter longer than those found on Soapberry trees. It’s a really neat, really short-term example of evolution just in the span of a few human generations.

Extra Detail: Like so many cool quickie-evolution stories the details are just a bit more complicated. Soapberry Bugs down in Florida and the Gulf Coast have another native host- Balloon Vine, Cardiospermum corundum, with even thicker fruit walls, and the Soapberry Bugs found on these vines have beaks that are a full 2mm longer than even those found on Goldenrain trees.

If you’re into these kinds of stories, I pulled this example out of the extremely informative (though pretty dry- you’ve been warned) book Alien Species And Evolution, by George W. Cox. The book details hundreds of examples of how the introduction of exotic species (plants, insects, fish, birds, insects- you name it) has dramatically altered the evolutionary course of both natives and exotics, here in North America and elsewhere.

The Goldenrain bloom typically lasts 2 weeks, so you’ve got about another week to check it out. It’s an interesting tree, well worth pulling over and checking out on your drive home from work. Really, who cares what the neighbors think?

I planted a Goldenrain in a flower bed here in Stansbury Park and it's a fun tree, always changing in appearance. It first leafs out, then the terminal branches seem to shoot straight up into little spires, which then produce the yellow flowers, then red pods that turn brown as they expand. Incidentally these little spires seem to die back over winter, and new growth comes further down on the branches.

We love this tree, but anyone considering planting one needs to be prepared for little Goldenrains popping up everywhere from all the seed pods!

By the way, June is monsoon season in Korea, so maybe the Goldenrains are waiting it out.

ElGuapo- thanks for your comment. You're the 1st person I've heard from who's actually planted one of these trees. And I'd read that they escape cultivation back East, but didn't know they did so here till your comment.

I didn't know Korea had a monsoon season; that's a smart suggestion for the summer bloom-time.

Thanks for this post. We are headed to Utah in about a week and China in about a month and it will be fun to look for this tree. Is it okay if I save a few of your "Weird Guy" photos for reference?

Cathy- feel free to take/copy whatever pics you like. The bloom here is now over, and where there were flowers there are now weird little light-green seed pods, about an inch long, hollow, vaguely pear-shaped. They turn brown later on.