The mid-mountain trail between the Canyons and Park City is one of my favorite parts of the Steiner100, and the flowers have changed a lot since I rode it 2 weeks earlier. 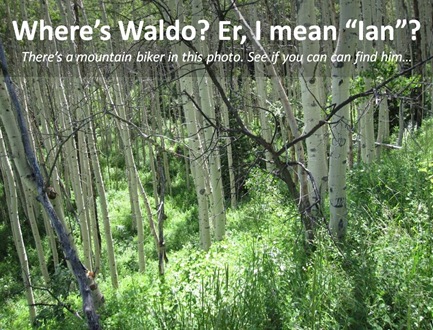 There’s also a newcomer- Mountain Globemallow, Iliamna rivularis (pics right, left). I like this guy because it’s both attractive and a bit unusual. It’s never super-common, but occurs in isolated patches through the Aspen forest. And it’s not

particularly closely-related to anything else around it. The closest thing we’ve looked at to it is our old friend Desert Globemallow, back down in St. George. Mountain Globemallow seems like its mountain cousin, adapted for a cooler, wetter world.

Side Note: There’s another flower that looks a lot like this that’s been blooming for about 2 weeks about a thousand feet lower, down around Jeremy Ranch, and for about a week I thought it was the same thing. But it’s not- it’s Rocky Mountain Checkermallow, or Salt-Spring Checkermallow, Sidalcea neomexicana (pic right). It’s another close cousin, and at first glance it’ll fool, you, but the stamens are way different.

When Mid-Mountain trail spat us out in Park City, we lost one more of our group. The remaining 6 of us turned upward, Westward and homeward in the late afternoon heat as we began the long, seemingly endless climb up onto the Wasatch Crest.

Tangent: Our Park City drop-off was none other than Fast Jimmy, on whom the heat had taken a bit of a toll. But this is a great time to mention that FJ has had a busy cycling season, that’s been reflected in his waistline. Since our White Rim adventure- just 6 weeks ago- FJ has lost 15 lbs! Go Fast Jimmy! 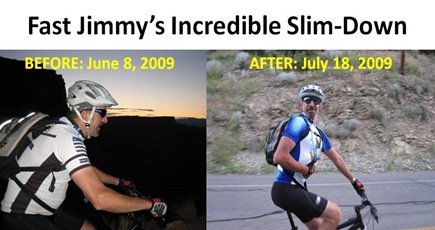 When we finally crested Puke Hill at 9,600 feet, we re-grouped and caught our breath.

The flowers here were great as well, and what was particularly interesting was that much of the Scarlet Gilia up here was a light pinkish white. I’ve blogged about Scarlet Gilia a number of times; it’s beautiful, common and easy to ID. But one of the most fascinating things about this guy is that the flowers on individual plants and groups of plants actually lighten in color later in the season, and apparently they do so in response to a pollinator shift. Early in the summer, Gilia’s primary pollinators are Hummingbirds. But as the summer progresses,

the Hummingbirds move on, and the plant relies more on the remarkably-convergently-evolved (and equally-long-proboscised*) Hummingbird Hawkmoth. Hawkmoths, who of course have a completely and radically different system of color vision than birds, prefer lighter-flowered colors, and the color shift of the flowers appears optimized to attract their attention.

*Can I make a word out of that?

Side Note: Unfortunately, despite the fact that the lovely, light=pink “Scarlet” Gilia were everywhere along the Crest, I only snapped this one, blurry, while-rolling, photo (right). What can I say- by mile 80-something it gets harder to make photo stops.

Racing along the crest is always thrilling, but doing so in the early evening feels like chasing the sun back into the Salt Lake Valley. The miles rolled by, and even after 80 miles we felt fast and confident, threading our way smoothly down “the Spine”, past Desolation Lake and back toward Mill Creek.

There’s a point along this stretch where you can look off into the distance and see the Great Salt Lake, and the salt flats beyond. In the late afternoon it’s obscured in a white-hot summer haze, a reminder of the 100+F temps in the valley below. After all these years, this is still my favorite view of the valley, and it makes me think how all of the streams and springs that feed the green lushness around me will eventually finish their journey, just 30 miles away and 5,000 feet below: evaporating on a white-hot playa, under scorching desert sun. It’s the weird combination of beauty and harshness that is the Wasatch Front, wrapped up in a single picture.

Down, down, down into Mill Creek Canyon, through Spruce and Fir, past Fitweed and Flax, we sped through meadows and forests till we popped out at the

Big Water trailhead and bombed down 3 miles of twisty asphalt before jumping on Pipeline trail. Almost 4 weeks ago I blogged about this stretch of Pipeline, mentioning the tall grasses brushing against my shins. On Saturday they brushed my arms. The evening air had started to pool in the draws, giving us momentary respites from the heavy hot air of the day. (Another blurry pic- sorry- along Pipeline, left) We were almost home.

But at the top of Rattlesnake Gulch, our exit down to the pavement, I looked at my computer and did some quick math. I would finish a couple of miles short of a full century, and I talked one of our remaining group- young “Ian”- into pedaling out to the Mill Creek overlook and back for an extra couple of miles. 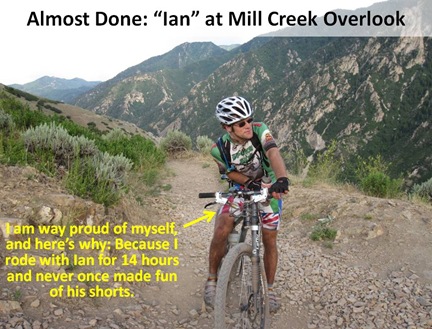 On the way back, pedaling quickly, I spied a Gopher snake crossing the trail. In a hurry, and calculating that I’d miss it, I kept rolling. 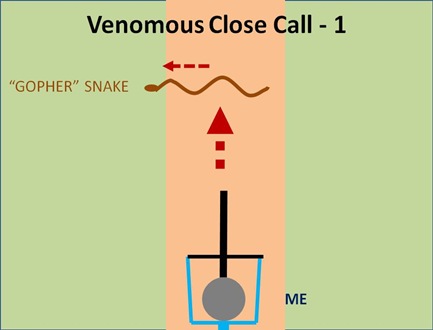 Only… it wasn’t a Gopher Snake. As it crossed the trail it quickly coiled and rattled, as I passed it by less than a foot at 12-15 MPH. My heart skipped a beat, but he didn’t strike. I yelled back at Ian, but it was too late- he’d already rolled past as well, only realizing it presence when alongside it. 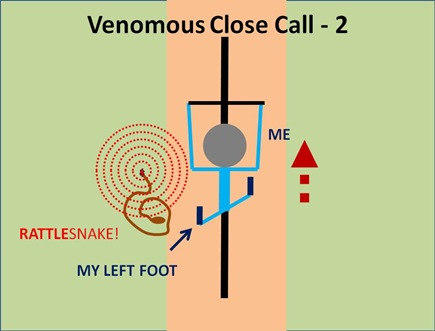 Utah has 7 species or subspecies of Rattlesnake. The one I blogged about last year, down by the Dirty Devil, was a Midget Faded Rattler, Crotalus viridis concolor. Down around St. George, you could conceivable get bit by 1 of 4 different species of Rattler. But up here along the Wasatch Front, we have just one- the Great Basin Rattlesnake- C. viridis lutosus. C.v. lutosus isn’t at all unusual; if you hike or bike often enough in the Wasatch between 5,000 and 9,000 feet you’re eventually going to cross paths with one*.

*And I suppose if really often enough, get bit, eventually… All Rattlesnakes are venomous, and inject venom through frontal, hinged, hollow fangs. The venom is a modified saliva, and consists of 2 principal components: neurotoxin and hemotoxin. Neurotoxins act on nerves and cause pain and paralysis. In other snakes, such as Coral Snakes, whose venom is primarily neurotoxic, bites can lead to death through paralysis and respiratory failure. But the neurotoxic component in Rattlers isn’t that powerful. Rather the more problematic component is usually the hemotoxin, which disrupts blood-clotting, destroys capillaries and muscle tissue, and clogs the lymphatic system with dead cells. Although Rattlesnake bites are rarely fatal, permanent scarring muscle damage and even loss of limbs are not uncommon.

Tangent: Rattlesnake bite is the probably the one backcountry potential mishap for which I don’t have a good plan. The standard advice is Seek Medical Attention. That’s less-than-satisfying advice in the desert canyons of Southern Utah, where cell service is non-existent, and return to one’s vehicle can take a full day+ when healthy… The various snakebite kits are generally considered worthless at best, harmful at worst. If any reader has a plan or product they can recommend (and have used) I’d love to hear about it.

The 6 of us regrouped down at the bottom of Rattlesnake Gulch* and rolled home along Wasatch Drive. It was a great Steiner100, the best yet. But don’t take it from me; take it from Aurora Coryalis and Hunky Neighbor:**

*Yes, it’s really called “Rattlesnake Gulch.” Talk about a place where one ought to be careful of Rattlers…

**Any SLC locals know what the deal is with that garage?

Hey, I was happy to see the scarlet gilia identified today. I just spent Monday and Tuesday camping in the Manti-La Sal Nat'l Forest and saw lots of these. From the car I thought they were firecracker penstemon, but up close you can see they're different. That's also a cool little factoid about the color change. Most that we saw were still scarlet, but my wife remembers seeing paler pink ones.

EG- yes they do look like firecracker penstemon at first glance, (though I see more of those down south than I do up around here). Interestingly I haven't yet seen any pink/white gilia below 9K feet yet. I'll keep an eye for them as the summer progresses.

Wow, those coral pinkish and pinkish white little guys on the Crest last Saturday were scarlet gilia?! We were remarking on what an awesome unusual color they were and I wondered why I had not noticed them ever before. That is really amazing about their color change.

Oh, and a correction to my comment on your last blog - it is Chamois Butt'r that is highly inferior to DZNuts. I had called it Chamois Creme.