Because my real posts have actual information in them. Plus cool graphics and meandering tangents (which oddly have turned out to be the one thing most people actually read in this blog.) But anyway I don’t have a real post today, just a heads-up/shout-out to local mtn bikers.

Tomorrow is the 4th annual Steiner100. 3 years ago my friend OCRick (guy who never reads my blog) turned 60. In celebration of that milestone he put together a 100 mile mtn-bike ride that starts and ends at his house in Salt Lake, near Bonneville Golf Course. We enjoyed the ride so much we’ve repeated it annually, and tomorrow will be #4.

Tangent: Yes, OCRick is now 63, and he routinely rides- and hangs fine with- guys 20-30 years younger. He is the toughest old SOB I have ever known.

Nested Tangent: Here’s the best OCRick story: He was 4F’d from the army (and thus spared service in Vietnam.) I’ll skip the details, but he was deemed medically unfit for Army service, which if you know him is absolutely ridiculous, because if I were to clone just one of my friends in order to create an army of ultra-mean, tough, durable supersoldiers, who could march all day, sleep on the ground, eat crappy food and kill people with their teeth, I would totally pick OCRick.

Anyway, our route will take us over most of the best, well-known mtb trails between Salt Lake and Park City, including Mormon Trail, 24/7, Glenwild, Cobblestone, Flying Dog, Pinebrook, Mid-Mountain, Crescent Grade, Apex, Keystone, Wasatch Crest, Great Western, Big Water and Pipeline. So if you’re out on any of those trails and see us roll by (or pass us collapsed alongside the trail), make sure to say hi. How will you know us? That’s easy- those of us who rode it Year One have matching jerseys, which you can see in the photo below. 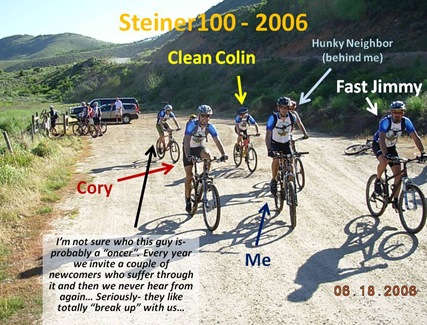 Have a great weekend. Oh, one more thing-

Update to Yesterday’s Post: Yesterday “Lance” heard back from the insurance company. The good news is that they will indeed cover Gleevec. The bad news was that the figure I gave that Lance would pay was low. Lance’s monthly co-pay for this drug will be $769 per month, for the rest of his life.

Assuming Lance retires at age 70, and could have saved that money, and let’s say put it all in municipal tax-free bonds paying 4.5%, that’s about $700,000 dollars less he’ll have at retirement. But at least he’s safe from Socialism.

The good news is that the Gleevec patent expires in 2013, so the cost should come down substantially at that point. Not that I'm defending our healthcare policy or anything. People bitch and moan about the cost of a single payer system but don't even consider what they're (or more typically their employers are) paying today.

SBJ- Great point re: the patent expiration. "Lance" and I had lunch today, and that expiration is foremost in his & his wife's minds right now as they re-think their long-term finances.