Saturday SkiBikeJunkie and I did a ski tour from Big Cottonwood up and over into Mill Creek. 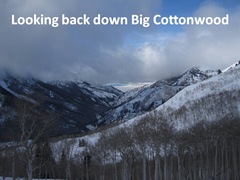 The temps were warm- about 30F when we started skinning up from the Spruces trailhead at 9AM, and after the cold snaps of the past couple of weeks the weather felt almost balmy. Our route took us along Mill D North, up and over Tom’s Hill into the drainage behind, up the East ridge of Reynolds to the peak, down through the West-side glades, back up and over to Dog Lake, up to the top of Little Water Peak, a minor (9,500 ft) knob rising above the surrounding aspen forest.

At some point along the way SBJ said something that,

despite having tramped around the Wasatch for over a decade, never really occurred to me before. He said that one tends to think of the canyons of the Wasatch as big, parallel drainages, but that they’re really more like a hub & spoke system, and when you get up to the “hub” everything sort of comes together and the drainages all meet up. I don’t know why I’d never thought of it before- I’ve transited the “hub” many times by bike and ski, but I still tended to think of the canyons as “parallel lines”. 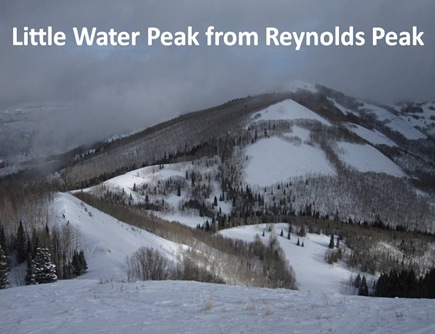 From Little Water Peak we surveyed possible routes down into Mill Creek. Finally agreeing on the best choice, we de-skinned*, dropped into the aspens, and threaded our way down into the canyon.

*Take your climbing skins off your skis. Just in case any non-skiers are reading. 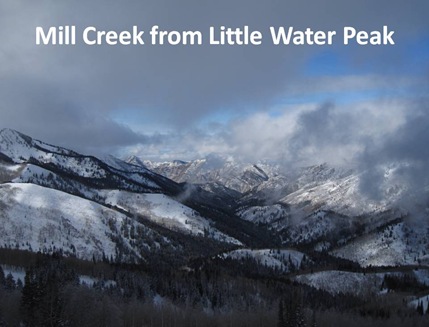 Backcountry skiing is fun in general, but I like tree-skiing best of all. Part of it is the fun of line-finding through the trees, part of it is the soft powder protected from mountain winds. But I think what I like best about tree-skiing is the constant sense of discovery. Unlike a bowl or open slope, you can’t see what’s ahead; the path through the glades reveals itself to you as it happens. You can’t know the run, or even image it until you actually experience it.

Tree-routes reveal themselves bit by bit. A glade rolls, constricts, pinches out, and then a quick dark tunnel between tighter trees leads to an opening, leading to another opening, which in turn leads to another glade you never knew was there, never entered before, and which maybe, quite possibly, you’ll never pass through again. 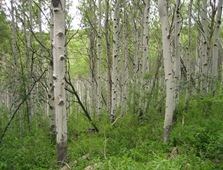 What’s interesting about these glades is that although you could theoretically visit any of them in Summer on foot, in practice you never would. They’re filled with waist-to-chest-high undergrowth, and though a trail may pass within a half-mile or less, you’d probably never bushwhack your way to them. (Pic left = Aspen forest in June.) And that’s the irony of the hub & spoke model: the closer to the “hub” of the Wasatch you get, the more the world around is filled with secret little hidden- almost unreachable- places.

But snow- that strange season-long blanket of frozen water- somehow opens up paths into these secret places, letting you glide in and out of hidden glades you’d never reach otherwise. And after you leave it blows and snows your tracks away, making those places secret again.

Here’s a couple of minutes of helmet-cam video during our descent into Mill Creek. But before I show it, I need to set expectations. The web is chock-full of exciting, amazing, Warren Miller-esque ski videos. Mine are not like those. There are several reasons for this, foremost of which is that I am an exceedingly lame skier*. In fact, most of my ski runs go something like this:

*Certainly, my lame-ness is compounded by my misguided use of free-heel gear, a pointless, multi-year, granola-esque undertaking which I intend to rectify shortly.

No, this won’t be exciting; it’s just weaving between widely-spaced trees in deep, soft powder. But it gives the sense I was describing a moment ago of one glade leading to openings, to choices, to other glades, to little mysteries and hidden places continually being revealed, while other glades, openings not followed, remain hidden, secret and unknown.

Tangent: I once read this great sci-fi/fantasy book about a haunted forest. It was this old stretch of primeval English woods that was all thick and overgrown and almost impossible to penetrate. But if you paid careful attention and were patient and persistent, you could gradually find pathways that led to other pathways which could gradually take you deeper into the forest, revealing its mysteries. Backcountry tree-skiing sometimes makes me think of that story.

Eventually, like all tree-runs, ours funneled us into a ravine, through which we teased and cajoled our way down. Sometimes the going was smooth…

But eventually we popped out on the snow-packed road and coasted and skated our way down. As we descended we started to encounter people again- infrequently at first, then a steady current- all sorts of folks, looking mostly happy amid the bright sun, blue sky and above-inversion-level air. Having slalomed our way earlier through trees, we now slalomed our way through XC skiers, snowshoers and dog-walkers back to the gate and the waiting car.

Probably one of the most overused analogies for life is how it’s like a journey. And though carpet-worn, we like life-as-a-journey analogies because, to a certain extent, they work. We start somewhere, go someplace, and wind up somewhere else. But most journeys aren’t like life. When we drive to Vegas or Reno or Denver, we know how far it is, how long the trip we’ll take, and what road we’ll take to get there. When we go for a ride on the Shoreline or Mid-Mountain Trail, we know there’s a clear, intended trail for us to follow.

But with tree-skiing, the life-as-a-journey analogy makes more sense. When we ski down through a forest in the backcountry, although we pick a direction and have an approximate destination in mind, we don’t really know what path we’ll take down, exactly where we’ll end up, or quite when we’ll get there. At each junction, each glade, we make our best choice, which in turn leads to other openings and other choices, and yet ends other possibilities at the same time. After we’ve gone a ways, we may start to see a pattern, and our route as a whole may even make some sense, but we can’t see that pattern until we’re most of the way down. Sometimes, part-way down, we realize we made a poor choice early on, but it’s no good to just stop and sulk in the forest for long; we look around, pick the best next opening, and ski on.

I've been thinking about that tree shot off Little Water all weekend. Wonderful stuff.

BTW, did you see that there was a slide off the other side of Little Water, the side we looked at and didn't ski because it looked sketchy? Can't remember if it was Friday or Saturday, but someone kicked a cornice and it went.

Very nice! Thanks for sharing the experience... That helmet camera's going to be a boon for me, as long as you keep doing things I'm not likely to try in the rest of this lifetime...

Wow, I thought I was the only person who ever read Mythago Wood. I managed to forget the name of the book for a decade or so, which drove me mad since I recalled it very fondly and was unable to recommend it to friends. I finally stumbled across it in a used bookstore a few years back. Alas, on re-reading it wasn't quite as awesome as my glowing memories; the prose is astonishingly dry.

// tell me you're a Richard Grant fan and I'll be officially freaked out.

The bike blogs I read seem to be conspiring to get me to try skiing this year.

Ok, ok, I give. I took a 'learn to Nordic' course at Yosemite last week and had a good time. But really I'm itching to get off the groomed trails into backcountry and tree skiing, if I can find some good sites for it in New England.

A few places I mountain bike (like the foothills above my house) have some hidden places, but certainly not as many as skiing.

I must admit, that looks fun. I've resisted backcountry skiing because of the expense of the gear, the avalanche danger, and I'm not a good skier. But poking through trees (safe from avalanches) looks like something I could do. Now if only I could get the gear on the cheap. Oh, wait, I have an agreement with my wife to start no new hobbies. Hmmm.

I love your ending analogy!! I also loved getting to go "tree skiing" for the first time in 4 years. I actually felt like *I* was skiing through those trees. It sure looked like fun.

I also like the spokes of a wheel analogy for gulches and gullies. I think that it works around here too. I'm going to look at my topo maps with a new eye!

SBJ- I just checked the report. Looks like the day before. Why didn't we see the exposed (post-slide)area? Think blown snow covered it?

Sally, KB- glad the helmet-cam is working for you!

Kevin- It's been probably 20(?) years since I read MW, but it stuck in my mind. Haven't read Richard Grant, but I'm a sucker for post-apocalyptic stuff, so may check it out.

ElZo- find a local BC skiing friend, or maybe a group/club. It's a way easier sport to get into with an experienced friend/coach.

Kris- I'm sure you'd have a good time. Yes, it is an investment in gear (and time.) Living here in UT though, and loving the backcountry as you do, I imagine it'd pay off for you.

Mythago Woood was a great book. That makes 3 of us.

Wasn't so keen on the sequel, very long and not much happening.

Einstein's 1st Law of Tree Skiing: The faster you go, the smaller you get.