I really believe that the world is divided into two kinds of people: People who already know that pecan pie is the best kind of pie ever invented, and People Who Just Don’t Get It*.

*Sadly, (Otherwise) Awesome Wife is in this category. Her favorite pie is cherry pie. Which would be OK, except that she’s sort of like a Cherry Pie Communist Party Boss. Before every family holiday, she’ll poll various family members as to what kind of pie they’d like to have. (We choose 2.) She’ll take everyone’s “vote”, tabulate and then happily announce the results, which, remarkably, always include cherry, even though I’m reasonably certain that no one besides her has ever cast a vote for it.

Anyway, Friday night was a pecan-pie-lover’s dream come true. One of the nice, unexpected side-benefits of this project is some of the great friends I’ve made through blogging. Now 2 of these friends- Rachel and Jube- are formidable cooks. And it came to pass a month or so back that some smack-talk was exchanged regarding who made the best Pecan Pie. Things escalated from there, and so it was that Friday night several of is gathered at the Watcher Family Headquarters for the first ever Salt Lake Valley Pecan Pie Throwdown, a truly epic competitive event. 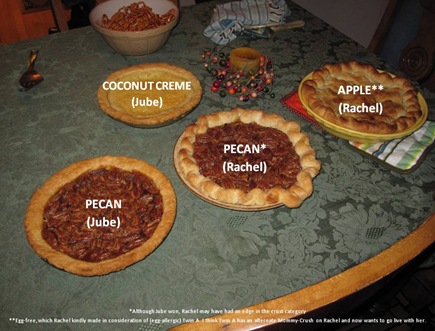 Tangent: Pecans, BTW, are way cool. First off, even though they look like Walnuts, they taste sweeter, less bitter, and way, way yummier.* The two are fairly closely-related, both belonging to the Walnut Family, Juglandaceae**. Botanists go back and forth on whether Pecans and Walnuts are true nuts or drupe fruits (the part you eat is endocarp), similar to apricots, plums and almonds***

*Totally my opinion, no science whatsoever to back it up. Hey, it’s a Filler-Post, lighten up!

**Not a family we’ve looked at before. It’s part of the order Fagales, though, which includes Oaks, Birches and Beeches.

***Though not closely-related to any of them (those guys all belong to the genus Prunus, within the Rose Family.) Drupe-style fruit architecture has evolved independently multiple times, even just within the Rose family.

But the coolest thing about Pecans is that they’re an “American Original”, native to North America, and one of the “newest” commercial crops, having been domesticated only since the 1880’s.

Bonus Tangent: So are Walnuts native or exotic? Sort of both. There are Walnut species native to both the Old and New World. The walnuts we eat are generally from the Persian (or English)Walnut, Juglans regia, which has been grown commercially in California since the early 1800’s. But interestingly, in the 1890s, growers switched to grafting J. regia onto rootstock of the native Hind’s Black Walnut, J. hindsii, for that species’ superior disease resistance. In the 1950’s, growers switched rootstocks again, to the “Paradox Walnut”, a hybrid of J. regia and J. hindsii, and that’s what grows most of the walnuts we eat today.

The contest was delightful but challenging, and judges UTRider, Blackdog and yours truly* summoned all of their powers of taste amd discernment in awarding the prize. But when the votes were cast, Jube was declared Pie Queen.

*SkiBikeJunkie was also present but was DQ’d as a judge on account of allegedly having slept with one of the contestants. He briefly denied the charge in hopes of participating, but their 3 children ratted him out. 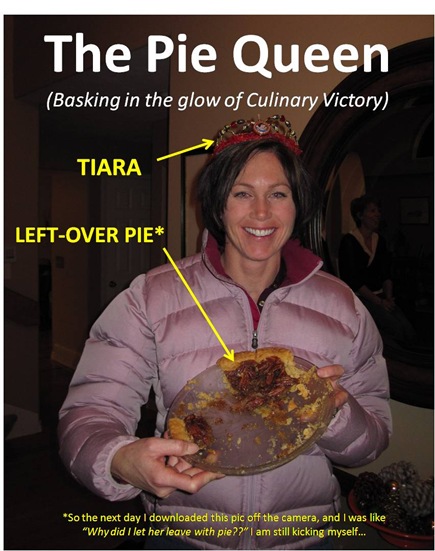 It should be noted that Rachel’s pie was also fantastic, and in fact won first place in the Elite Youth Judging Panel.*

*BirdWhisperer, Twin B, UTboy and UTgirl. JunkieGirl was DQ’d on account of allegedly having been delivered and raised by one of the contestants.

damn, you should have posted this before your pie night, and you could have had a whole house full of strangers eating with you! ;)

I moved to Boise from North Carolina last year, and being from NC with most of my family from northern Florida, pecan pie was a staple growing up and my grandma in FL always has some ready when we visit (although, she is diabetic now, so she has to make one regular pie and one pie with Splenda so she can eat). But you're right - pecan pie is clearly the best pie, especially with some Bryers vanilla ice cream on top.

But over this weekend, two of my NC buddies flew in for a ski trip and we drove to Utah on Friday and skied at The Canyons on Saturday. Pie would have been just the right thing before a day on the slopes.

ugh. I am SO jealous.

I hate to have to correct you, because I know you spend a lot of time in researching your posts, however, to be completely scientifically accurate, pumpkin pie is in fact the best pie, however it is so closely followed by pecan that this is a very common and understandable error. Cherry, I'm afraid to say, is not even in the running.

At the risk of exposing my northern upbringing, I don't get it (pecan, that is). But I do know there are two kinds of people in the world: those who divide people into two kinds and those who don't. (ooh, that might be a great koan)

Likewise, there are two kinds of desserts: those that require Breyer's ice cream or some such equivalent to cut the cloying sweetness and make them edible, and those that are merely enhanced by the presence of something cool and creamy. A friend used to call them Type A and B, or 1 and 2, but I could never keep it straight.

I guess that means, scientifically speaking, I'm with maggie and AW on this one!

I'd say that you're all wrong - the best pies I've encountered have been beef and Guinness. Real pies involve meat, or at least pastry over the top. What you've got there (except for the apple one) are tarts.

Out of all the flavors of gelato I could choose for lunch today, I picked pecan. And then I read this post. Obviously I would have made an excellent judge.

Congratulations to all the pie eaters, the obvious winners in this contest.

That was a super fun contest. Even if I had not been crowned 2010 Salt Lake Valley Pie Queen, I would have had tons o' fun baking and eating.

P.S., I am going to store my crown with my pie making paraphernalia and wear it each time I bake a pie so that it may restore my lucking baking powers.

Joe, I was raised in North Dakota, and we pronounced pecan "puh-CAAN".

My secret word verification to post this comment is "reater". Note only one letter difference from "eater".

Maggie- Pumpkin is a fine pie, but no way would it be my last-meal dessert on death row. But I will cut you some slack, being a foreigner and all (eh?), and living in a land where pecans can’t grow. However, I’m not sure even the foreigner-excuse can warm me to Christopher’s preference. I’m sure meat in a pie tastes fine, but it just seems like, I don’t know, eating a cat or something.

Sally- I’m a Northerner too, but I now like both pecan pie and grits. Your friend’s observation is perceptive, but I am a sucker for borderline sickly-sweet treats. (Anybody else love those Jarrito brand Mexican sodas?)

Colin- I see your future… it involves being a contestant in a future Watcher-hosted Throwdown…(eh?)

Jube- About the word verification- you know why that happens, right? There’s a guy working nights at Google who reads all the draft-comments (quiet guy, wears flip-flops and a Tron T-shirt, limited social skills) and sometimes he slips in a word related to your comment just to mess with you.

I know this because sometimes, late at night, after the rest of you have gone to bed (well except for Christopher- it's daytime down-under, so he is probably wide awake and eating a cat-pie or something), he sends me coded messages foretelling the Second Coming, or the pending arrival of the Dubhe-Companion-Star Planet Overlords.

BTW, Pigeon Week Part 2 was scheduled for tomorrow, but will slip to Thursday, largely due to the schedule disruption from the 3 hours I spent getting my license renewed today (Utah readers know what I’m talking about. Great new law, eh?)

One wouldn't normally think of pecan pie as being a Mexican dessert (at least I wouldn't), but it actually makes perfect sense. Chocolate and pecans both have Mexican origins.

Big thanks to the watcher family for hosting the pie throwdown. Great times were head by all. Can't wait for posole night--let's get that on the calendar.

I'm trying to figure out how you stole my family's pie contest. I am a multiple time Pie King.

I have discovered that pecan is in fact the best pie- and if you want to have a chance at winning our pie contest you must a) make the only pecan pie or b) invoke the bull moose party strategery and make sure there are two or more pecan pies and split the vote leaving your apple/cherry/cinnamon chess/french silk or other awesome pie to rake in the votes.

I may have been tempted to agree that Pumpkin pie is the best of all pies prior to this contest. Having had the pleasure of judging the contest I now am firmly in the Pecan Pie corner. Honestly two of the best pies I have ever had the pleasure of eating. The apple was also very very good. I the crust was delicious and very crisp through out. I am used to soggy crust and Rachel does some magic and keeps it crisp. Absolutely the best pies I have ever eaten.