After Professor Chuck’s confirmation of my discovery, 2 things happened. First, I became fascinated (OK obsessed) with learning about, and relocating, the various hybrids Drobnick discovered back in the 1950’s, and second, I started paying closer than ever attention to the Oaks I biked and hiked past, looking for more possible hybrids. 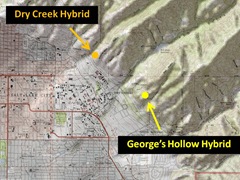 Rudy Drobnick’s 1958 Masters Thesis is entitled “Relic Hybrid Oaks.” There’s one copy of it, in the bowels of the U. of Utah library. Last Fall I checked it out (courtesy of Organic Chemistry Professor Rick, the guy who never reads my blog) and made 2 more copies- 1 for me, and 1 for Professor Chuck.

Tangent: Searching through the stacks of old botanical master’s and doctoral theses is like a strange glimpse at dozens of lost stories. Each one represents years of study or searching or analysis into some arcane botanical topic, the vast majority of which have long since been forgotten about. They’re decades old, many of the authors are now dead, and most haven’t been checked out by anyone in more than a decade. Perusing a half-dozen or so such “lost” theses, I was reminded of the mysterious, magical library on one of the islands in the “Narnia” series book, “Voyage of the Dawn-Treader”…

Drobnick’s thesis, like most theses, is dry reading, but the story it tells is remarkable. Not just the story of the Oaks, but what it tells about Drobnick. The range of challenging mountain and foothill terrain that this guy covered is phenomenal. Hiking through the foothills is challenging, hot and scratchy, with the route often impeded by impenetrable thickets of scrub oak. The two dozen or so hybrids Drobnick found must represent several thousand hours of foothill scrambling.

Tangent: After completing his master’s, Drobnick largely left the field. He spent his career working for the Utah Department of Natural Resources, a job that provided him with lots of solitary outdoors time. He’s supposedly an interesting, reclusive character, never married, retired and living out in Bingham Canyon. In later years he’s become involved with (and apparently a believer in) Bigfoot sightings. Professor Chuck hears from him every few years or so, most recently when he was seeking information about some hybrid Junipers. 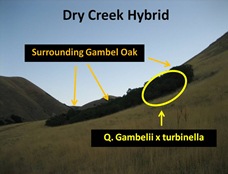 In October and November of 2007 I located a number of Drobnick’s hybrids, using the location descriptions and old black and white photos in the thesis. The 2 most interesting and accessible are within 2 miles of my house, and each a quick walk from Red Butte Garden.

The most accessible is right above the mouth of Dry Creek Canyon, just above the Bonneville Shoreline Trail. The hybrid stand is part of a greater “ring” of Gambel Oak, clearly visible from the trail or the hospital below, or for that matter, from much of the city. The hybrid portion sits at about 4 o’ clock on the ring, and the leaves are immediately and obviously different from the surrounding Gambel Oak, with clear Turbinella characteristics, and persisting clear through November, long after the surrounding oaks are bare. According to Professor Chuck, it’s thought that the Dry Creek hybrid is probably a back-cross to Turbinella. 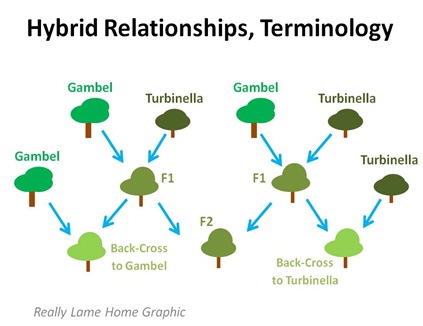 So when Professor Chuck says that the Dry Creek hybrid might be a “back-cross to Turbinella”, he’s suggesting that a previous F1 Gambel-Turbinella hybrid may have reproduced with a pure (and now long-gone) Turbinella Oak, and that the resultant back-cross offspring has stuck around to the present by cloning itself… As successive hybrid generations back-cross toward a pure-species parent, the offspring display various intermediate stages, called “introgression”. Professor Chuck believes that many Gambel stands around the Wasatch are the products of introgression and still display some Turbinella-like characteristics, even though genetically they’re overwhelmingly Gambel. 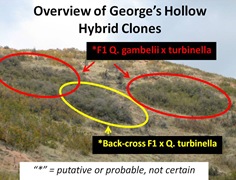 The most fascinating of Drobnick’s hybrids lies less than a mile South, on a south-facing slope in George’s Hollow, which is the most significant drainage between Red Butte and Emigration Canyons. Viewed from a distance, this large clone has the shape of a broken heart, with a clear break down the middle, and the left side larger than the right.

What’s so interesting about this stand is that it seems to be a couple of distinct, separate clones packed together. The right/East half of the heart, and as well as the upper portion of the left/West half of the heart, appear clearly hybrid, and generally “F1-ish” in character (pic right).

But the lower portion of the left/West half of the heart, looks incredibly similar to pure Turbinella (pic left); if I stumbled across it outside of St. George, I’d simply assume it was Turbinella. (There’s also a small “F1-ish” stand about 50 yards or so up on the ridge above and West of the “heart”, not mentioned in Drobnick’s thesis.)

I alerted Professor Chuck to the Turbinella-ish nature of that portion of the stand, and since then it’s been an ongoing side project of his to determine if it might in fact be a stand of pure Turbinella oak. (His current view is “no”, but he hasn’t ruled it out, and hopes that future genetic analysis could provide a final answer…) Such a find would be something of a Holy Grail to a Wasatch Oak enthusiast: incontrovertible, direct proof of the existence of actual Q. turbinella in the Northern Wasatch.

I continued to search for more of hybrids in Drobnick’s thesis. One just North of the mouth of Big Cottonwood Canyon appears to have been lost to development, but several in Northern Utah Valley, around Alpine and Cedar Hills, are still present and healthy. I continued to re-locate his hybrids until the snows of late November shut down my weekend foothill-scrambles. And as I hiked and biked up to the end of the season, I kept an eye out for other, yet-to-be-discovered, hybrids.

Next up: My 2nd hybrid discovery.