Why Leaves Change Color Part 1: The Deal With Chlorophyll 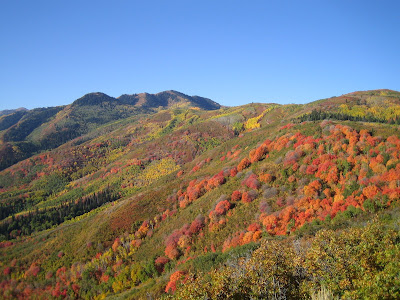 Up around Pinebrook and Jeremy, the Maples (specifically Bigtooth Maple) are starting to turn. Soon they’ll flare up all over the foothills, the lower slopes of the Wasatch, and across the valley all over the Oquirrhs. Over the next several weeks aspen and cottonwoods and scrub oak will all turn, along with the yellowing of the various understory shrubs/trees- serviceberry, chokecherry, and Rocky Mountain Maple. In its own way, even though it’s headed in the opposite direction, it’s a show as beautiful and interesting as the wildflower and leaf blooms of May and June. (Disclosure: pic right is from about 2 1/2 weeks ahead of now, in a previous year. But I just love it and was dying to use it.) 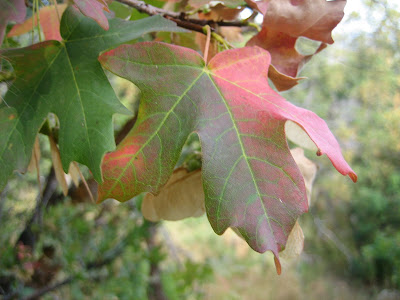 So now is probably a pretty good time to talk about why leaves change color in the Fall. Back in the Spring we never had to talk about why flowers bloom or leaves grow; reproduction and sustenance are pretty obvious reasons. But in the Fall it’s not quite as clear. Why do leaves change color? Why don’t they just fall off? If you’ve ever hacked a branch off a tree and left it lying around for a week or two before taking to the dump, you probably noticed that the green leaves didn’t start turning to some spectacular red or gold color- they just shrivel up and die.

But to understand why leaves change color in the Fall, we should probably look at why they’re green in the Spring and Summer- something we skipped over back in the Spring.

Complex, or Eukaryotic cells, the kind found in all complex multicellular organisms- moose, birds, trees, us- contain various structures inside the cell body called organelles. There are lots of organelles that do important things in cells, but the 2 most significant are mitochondria and chloroplasts.

Mitochondria are found in the vast majority of eukaryotic cells, in both plants and animals, and their primary- but not only- function is power generation: they generate the adenosine triphosphate (ATP) that we talked about when we were looking at brown fat and staying warm. 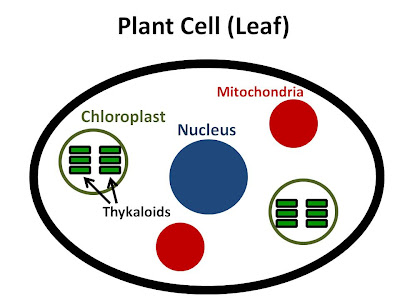 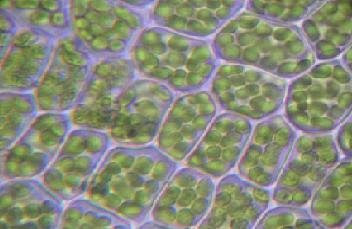 Chloroplasts (microscopic pic right) on the other hand, are only found in plants, and their primary function is food (specifically sugar) production. Within each chloroplast are a bunch of still smaller bodies, or sub-organelles, called thylakoids, and these little guys are where the action happens.

Evolution Tangent #2: In the world of Algae, which is way out of scope for this post, the story gets even more complicated and exciting. In some types of Algae, cells symbiotically engulfed existing photosynthetic eukaryotic cells which already had their own “engulfed” chloroplasts, thereby evolving chloroplasts through a “secondary” symbiotic event. And it’s even possible that some other Algae did this trick a third time, evolving chloroplasts through a “tertiary” symbiotic event. Primary, secondary or tertiary, the chloroplasts in all plants and green algae appear to be monophyletic, meaning they descended from a common "engulfing" event, some ~1.5 billion years ago. But the chloroplasts in Red Algae and plants/green algae appear to be paraphyletic, meaning they evolved from a separate, and possibly earlier "engulfing" event. 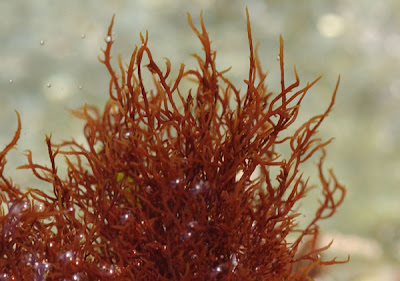 Nested Tangent: Red Algae, Rhodophyta, are a group of between 5,000 and 10,000 species of marine alage and seaweeds, some 200 of which occur in freshwater, the rest in the sea. If you're familiar at all with any of them, it's probably either as a seaweed, or one of the various micro-critters that builds coral reefs.

I explained paraphylteic and monophyletic groups back in June when we talked about Wyethia, Balsamroots and my Uncles John and Peter.

OK, these thykaloids are where you find the actual chlorophyll, and specifically it’s found bound to the outer membranes of the thykaloids. We’ve looked at a lot of complicated organic molecules this summer- the irritants in Poison Ivy, the photosensitizer in Cow Parsnip, the toxins in Black Widow venom, and the various poisons in milkweed and Larkspur. But Chlorophyll (molecular diagram right) is the honking monster molecule of them all. It comes in one of 5 main variants, only 2 of which are found in plants (the other 3 occur in algae and cyanobacteria.) The most common one, “Chlorophyll a” has 137 atoms in each molecule (C55H72O5N4Mg) Each of the five chlorophyll types has a different number of carbon, hydrogen and oxygen atoms, but always 4 nitrogen and a single magnesium atom.

Chlorophyll is the key component of photosynthesis, the chemical process where energy- in the form of light- is combined with carbon dioxide and water to produce sugars. Chlorophyll needs to absorb sunlight to effect this process, but it absorbs red and violet wavelengths better than greenish wavelengths. The greenish wavelengths tend to be reflected by chlorophyll, which is why leaves appear green.

Chlorophyll, like a lot of big molecules, is pretty unstable, and it breaks down rather quickly in sunlight, but during the Spring and Summer plants constantly produce new chlorophyll, keeping the leaves green.

Next Up: Lies Your Teacher Told You, And I Finally Get To The Point Of This Post

This was VERY helpful for when i did a science lab about leaves and photosynthesis! I recomend this website... they even had helpful pictures!
this website is awesome!!

thanks for the help <3

Sarah- thanks, and glad I could help!