Relic Hybrid Oaks Part 4: My Third Hybrid and I Finally Get To The Point

And so, after all this talk about Oak and Hybrids and finding things and Lake Bonneville, we finally come to the point of my story, which is: I found another hybrid. Like all the hybrids I’ve found, I could say I found it by accident, but I realize now that as I mtn bike at low speeds (i.e. climb) or hike through stands of scrub oak these days, I do so with one eye on the leaves around me, always on the look-out for tell-tale turbinella points. 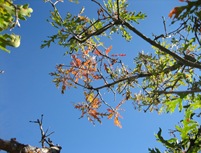 A new trail, “The Avenues” was cut above Jeremy Ranch last year. It’s now smooth and fast, and Rick (who never reads my blog) showed it to me late last month. On August 29 I returned to it, and climbing about ½ mile above its bottom (a paved private service road), just 100 feet or so above a high banked turn to the right, the trail passes through the bottom/East end of a sizeable hybrid clone (leaves pictured left.)

Tangent of Incredible Coincidence: Incredibly, August 29 of last year was when I found the Pinebrook Hybrid. Even more incredible a coincidence: I also found this hybrid while stopping to take a pee! Isn’t that amazing? Actually, it would be if it were true. I just made up that part to make a reader go, “Whoa- No way!” (if anyone ever actually read this blog…) But the August 29 part is true. Professor Chuck says that next August 29, I should buy a lottery ticket. 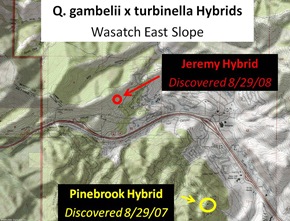 The Jeremy Hybrid is at almost the exact same altitude- 7,070 feet- as the Pinebrook Hybrid, and has the same aspect: South-Southeast. But it covers less than half the area- maybe 80 feet x 100 feet or so- and is far “patchier”, with “normal”, non-hybrid Gambel stems interspersed throughout its area. Professor Chuck says that it’s “regressing”, which seems to be botanist-speak for “in decline”. Like the Maple Hollow Hybrid, it appears to be a hanger-on, toward the end of its days.

Tangent: Of course a wild card in all this is global warming. Maybe a century from now the hybrids will be thriving, and Turbinella re-invading Northern Utah…

My hybrid discoveries all have something in common: I came across each of them because of recent trail development. The Pinebrook Hybrid was of course accessible for years to anyone who drove by, but the trail through it is probably no more than 5 or 6 years old, and the road and development in Pinebrook is certainly far less than 50 years old, making the hybrid inaccessible in Drobnick’s time. I found the Maple Hollow Hybrid the year the Upper Oak Hollow trail was cut, and the Jeremy Hybrid (close-up pic of leaves, above, right) the year after The Avenues trail was put in. In all 3 cases, had the trail not been cut, they’d be undiscovered today. And this makes me wonder how many more of these hybrids wait to be discovered. The Northern Wasatch is covered with tens of thousands of acres of trail-less scrub oak, much of it hardly ever seeing a human visitor approach within a few hundred feet, barring the occasional hunter (who passes after the leaves have dropped, even if there is a hunter-amateur-botanist analog of me tramping around out there…) Maybe these posts and accompanying pics will help another amateur biker/hiker keep an eye out for the next one.

Along with my discoveries, there have been at least 3 “false positives”, where I suspected I’d found a hybrid, only to have Professor Chuck “pass” on it. (In one case, Chuck was stumped enough himself to send leaves to an erstwhile colleague in California, who microsopically examined the leaf pores before declaring them Gambel.) Several times when hiking with Chuck, he’s paused to look at some leaves and said, “there’s some turbinella in that…” before continuing. And this highlights the problem of oak species, and really of species in general- figuring out where one starts and another begins.

Oaks are so promiscuous that they’re constantly hybridizing and introgressing across species boundaries, and Chuck says that he and other researchers have sometimes wondered if there even is such a thing as a pure Gambel Oak, or just infinitely varying grades of a mixed genome.

For me, what the whole hybrid oak thing highlighted is this: behind every stand of oak is a story: a story of origins and development and stresses and changes, and to a large extent each of these stories tells the bigger story of the world around it. With hybrids, these stories are a little bit clearer, but every thicket of scrub oak has such a story, though we can’t yet really read it. In future years, as their genomes become better understoof, I hope their stories will be clearer. Professor Chuck is in his 70’s; he won’t be around to see it. Maybe I will.

The Tucker article has specific history on your hybrids.