Why Leaves Change Color Part 2: Lies Your Teacher Told You

OK, so now that I've gone totally overboard with details about chlorophyll and the evolution of chloroplasts, and (hopefully) made clear why leaves are green in the Spring and Summer, I'll get to the point and explain why they turn red, yellow and orange in the Fall. 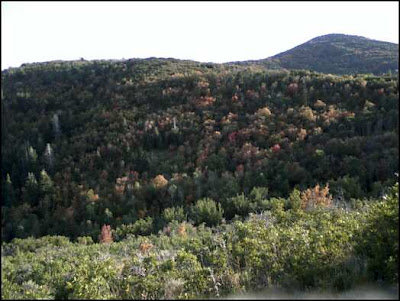 When Fall arrives, deciduous broadleaf trees, triggered most often by shortening days (but sometimes by frost, as in the case of the American Elm) stop producing chlorophyll. Now in school they taught us that when leaves stop producing chlorophyll, we see the natural color of the leaves, but it turns out that’s not quite true. The closest thing to a “natural” leaf color is brown, like you see in dead leaves that have lain on the ground all winter long. The browns are caused by tannins in the leaf body, and tannins don’t produce yellows or reds.

The yellow/orange colors in autumn leaves are produced by group of chemicals called carotenoids. There are two classes of carotenoids. The first is xanthophylls (molecular diagram right), which absorb blue/violet wavelengths, but reflect yellow wavelengths, producing a yellow pigment. The second is called carotenes (molecular diagram below left), and they produce orange pigments. (Carotenes produce the orange pigment in carrots, an easy way to remember which is which.) 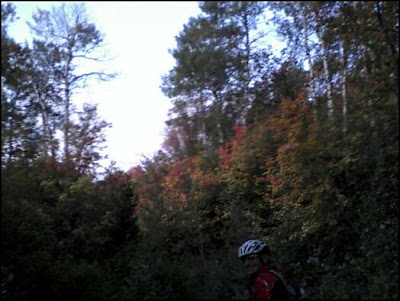 Tangent: You know, I really only have 2 friends who can understand all these molecular diagrams I stick in these posts all the time. Both are organic chemists, and one is Organic-Chemistry-Professor-Rick, who, ironically, steadfastedly refuses to read my blog. The other night I was over his house and mentioned my recent cougar-sighting to another friend and Rick was like, "Cougar? What? Huh?" But I guess I shouldn't feel bad; Rick is my only friend who refuses to buy a cell phone. When I loan mine to him (which is fairly often), he first peers quizzically at it, like it's some strange alien artifact, before slowly dialing, sort of like you'd expect Thomas Aquinas to react if you handed him an iPod...

But red autumn leaves- bright red leaves- like you get in Bigtooth Maple are another story. The red color is caused by a class of pigments called anthocyanins (molecular diagram below, right), and here’s the weird thing: anothcyanins aren’t produced until chlorophyll production ceases. This is worth thinking about for 2 reasons: 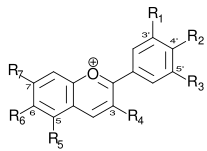 First, it completely stands what your grade-school teacher told you in its head. This isn’t the “natural” color of the leaf, or even left over pigment from the summer; this color (red) didn’t even exist in the leaf until the very end of the season, when the leaf started making it!

And second, why would a tree that’s getting ready to shed its leaves start a whole new chemical production process just a couple of weeks before its dumping the leaves anyway?

There are 2 main theories around anthocyanins. First is sun-protection, second is a “handicap signal.” I’ll explain both, but admit up-front that I’m partial to the former.

Packing Up To Move

When you move out of a house, you typically don’t just get up and walk out. Instead you pack up your stuff, and get a moving company, or your friends or whatever to help you move the stuff out. Sure, you throw away a lot of stuff, but most of the valuable stuff you take with you because you figure you’re probably going to need it.

Tangent: So this is as good a time as any to share my Ultimate Wealth Fantasy. Everybody has an Ultimate Wealth Fantasy. For some people it’s buying their own private island or bathing in money or having a private chef or Lear jet or being a James-Bond-style-supervillain and having a secret underwater city populated with hot-looking androids or whatever. For me it’s the Move Out Fantasy, which goes like this: If I were super-duper-wildly rich, then the next time I moved, I’d just walk out. I wouldn’t pack, I wouldn’t sell the house, I wouldn’t take anything except the clothes on my back and maybe the car or bike I rode away in/on. I’d just abandon everything. When I got to wherever it was I was moving to, I’d just buy a new house and all new stuff. 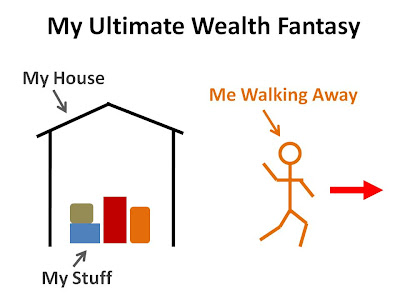 Seriously, I really hate the whole hassle of moving.

When a tree abandons a leaf, there’s valuable stuff, like nitrogen and nutrients, that it wants to get out of the leaf, because it’s probably going to need them over the coming winter and/or in the following Spring. 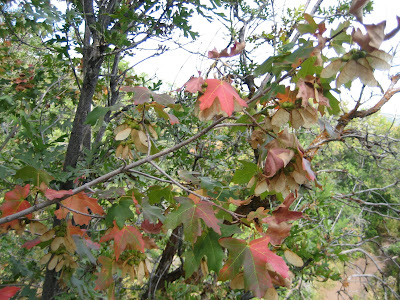 But to do that effectively, the leaf needs to be attached to the tree and (more or less) structurally intact. With no protective pigments, the sun would quickly “bake” the leaf and shrivel it up. But a strong protective pigment protects the leafs, delays the sun-damage, and gives the tree time to “move its stuff out.” Carotenoids provide this function as well, but anthocyanins are an extra, strong blast of sun-protection.

What Do Red Leaves, Peacocks and Hummer-Owners Have In Common? 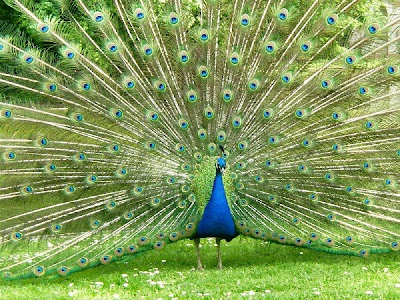 But why anthocyanin? Why not just amp up the carotenoids a little bit? After all, many trees get through fall fine with just carotenoids. Rocky Mountain Maple is a great example, and that’s why its leaves turn only yellow, never red. And this leads to the Handicap Signal theory. The whole idea behind handicap signals came about in the 1970’s to explain things like a Peacock’s tail. Male peacocks grow ridiculously oversized tails to attract females, and Handicap Theory explains the tail as a proof of male fitness. For the male peacock to be able to grow such a tail, live successfully and not get eaten by predators, he must be extremely fit and healthy, and hence the tail- a handicap from the perspective of resources (growth), speed and camouflage- serves as a fitness indicator, making him more attractive to female peacocks.

Handicap signaling also appears between different species, and a classic example is “stotting” among gazelles. When many gazelles sight a predator they hop around in an ostentatious, energy-wasting manner called stotting, presumably sending a message to the predator along the lines of: “Hey if I have this much mojo and fitness to spare, you are no-way-never-ever gonna catch me.”

Tangent: Handicap theory has been used by anthropologists to explain all sorts of strange human behaviors, from excessive spending on luxury cars to smoking, drinking and taking dangerous drugs…

Nested Tangent: Sometimes during bike races I noodle about handicap signals. When racers push the pace- without attacking- for a bit, say on climbs for example, are they sending handicap signals to dissuade attacks from competitors?

Trees have predators as well. And in the case of Maples, the scariest predator is often aphids, who lay their eggs on trees in the Fall.

Aphid-Tangent: Aphids are evil but way cool (not unlike Crabgrass, which we looked at back during Weed Week- man, was that an awesome week or what?). If I had time/bandwidth I’d do a 2-part post on them. In the first part I’d talk about their slick reproduction strategy. In the Fall aphids reproduce sexually, but over the course of the summer, aphids reproduce parthenogenetically, meaning females just become start producing eggs of genetic copies of themselves. This is sort of analogous to some of the combo-sexual/asexual reproductive strategies we looked at a while back in plants like Dandelions and Columbine, but it’s the first time we’ve seen it in animals.

In the second part I’d talk about the symbiotic relationship between ants and aphids, and how the former have apparently domesticated the latter.

Bugs are way cool. Maybe next year I’ll do a Bug Blog. 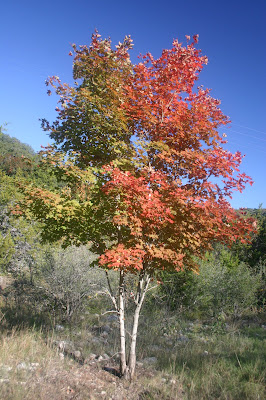 The Handicap Theory explanation for the production of anthocyanins goes like this: The bright shiny leaves of an Autumn Maple send a message to aphids that says, “I’m obviously a tree in great health, with energy and resources to spare on this showy color display. If you attack me I’ll be able to mount a vigorous defense against your egg-laying attempts, which will be unproductive for you.”

As I said, I’m not completely sold on handicap theory, and even if I do buy into it at the concept level, I’m still a ways away from buying into it at the Maple level. But it’s worth thinking about for 2 reasons: First, it shows your teacher was wrong, and second it’s a great example of how even some of the most basic, taken-for-granted aspects of the natural world are actually pretty complex.

Wow, I didn't realize the red color is from a new chemical in the fall but the yellow and orange are always present in the leaf. That is pretty cool. That wouldn't have been so hard for my science teacher to have explained.

Since this post was written way before I started reading your blog regularly, I had assumed OCRick stood for Obsessive Compulsive Rick. :-) Organic Chemistry Rick is much more complimentary.

You can count me as one of your readers that likes your organic chem diagrams.