Relic Hybrid Oaks Part 3: My Second Hybrid and the Findability of Things

One of the characteristics of Gambel-Turbinella hybrids in Northern Utah is that their leaves are often (but not always) persistent later in the season, a legacy from their Live Oak (turbinella) parent. Drobnick’s Dry Creek and George’s Hollow hybrids are great examples; they keep their leaves through November and often into December. In contrast, by mid-October the Gambel Oaks are generally bare and leafless. As a result, mid-October through late November is usually the best time to look for hybrids in the foothills.

Last October I finally got around to checking out the trails down around Draper/Point of the Mountain. I’d biked in this area years back before the whole (obscene) Suncrest development started up, but in recent years the city of Draper has built a fairly extensive trail network along the base of the North slope of the Traverse Mountains, with numerous side trails extending above and below the Bonneville Shoreline Trail, which now extends out to Point of the Mountain.

Tangent: This area is probably where the Shoreline trail lives up to its name better than anywhere, following for long stretches the clear bench marking the old shoreline of ancient Lake Bonneville.

A Lengthy But Worthwhile Tangent

Extended Tangent for Readers Who Don’t Know About Lake Bonneville: If you don’t know about Lake Bonneville, you’re missing out. Here’s the deal: Roughly 15,000 – 16,000 years ago, during the last ice age, the climate in the Great Basin was way wetter and cooler. Salt Lake, Utah, Toole, Skull, Cache and several other valleys were filled by a massive lake that was as deep as 1,100 feet. Big and Little Cottonwood Canyons were filled with glaciers clear down to their mouths, and presumably they’d calve off little icebergs that floated around in the lake. Many of the stand-alone ranges of the West Desert- Antelope Island, the Stansburys, the Oquirrhs, the Cedar Mountains- stood as islands in the lake, probably covered with dense fir/spruce forest. Lake Bonneville must have been an incredible sight.

About 14,500 years ago, the rock holding back the Northern end of the lake up at Red rock Pass (near Downey, ID) gave way, and much of the lake drained away in a catastrophic flood. The lake stabilized at about 700 feet deep, but with the changing climate gradually dried up over the next several thousand years. Today Great Salt Lake and Sevier Lake are the largest remnants. Interestingly, streams in many mountain ranges that were islands in Lake Bonneville, from the Wasatch clear out to the Deep Creeks, still contain the same subspecies of trout- Lake Bonneville Cutthroat Trout, Oncorhynchus clarki Utah, that inhabited the ancient Lake.

Lake Bonneville was one of a series of giant Western Lakes around this time; these types of lakes are known as Pluvial Lakes. Probably the only thing cooler than pluvial lakes during the last 15,000 years were the Proglacial Lakes up in Western Montana and Canada, but that’s a whole other story. For reference, the whole Lake Bonneville deal happened roughly 8,000 – 10,000 years before the Altithermal, when Q. turbinella was growing in the Wasatch.

Back To The Story 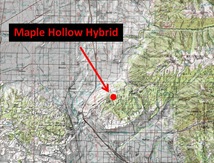 One day after work I was exploring the Draper trails by mtn bike, and I took an uphill side trail off the Shoreline trail, called Oak Hollow Trail. Oak Hollow climbs up into one of the 2 big side drainages on the North slope of the Traverse Mountains, which is called- yes, you got it- Oak Hollow. It wraps in and around Oak Hollow before entering adjacent Maple Hollow and continuing to climb. The trail was, and still is, unfinished, dead-ending about 2/3 of the way up to the main ridge, at about 5,700 feet. When I reached the end in late October, the surrounding Gambel Oak was already brown and leafless. But just above the trail- maybe 15 feet- was a single green bush. I scrambled up, and found my second Gambel-Turbinella Hybrid.

The Maple Hollow Hybrid is interesting for a couple of reasons. First, unlike the other two I’ve found, I immediately recognized it, without any doubt, as a hybrid. The leaves are obviously intermediate and distinctly un-Gambel-ish in form. They’re also very persistent- almost evergreen. I returned to the hybrid several times as the season progressed, and the “bush” was still covered in green leaves in early December, and still had about 1/3 of its leaves on January 3.

Third is its small size and isolation. It’s a single “bush”, maybe 5 or 6 feet high. The nearest of Drobnick’s hybrids is 4.75 miles away, in Alpine.

Tangent: On successive visits I searched quite a bit for other hybrids. Though I bushwhacked to several promising late-season green “blobs”, all turned out to be Alderleaf Mountain Mahogany, Cercocarpus montanus, which I blogged about back in July, and have come across only in this part of the Wasatch.

I wondered if the small size might mean it’s a relative youngster, perhaps seeding in recent decades from an acorn from one of the Alpine hybrids. But Professor Chuck, who finally visited the hybrid with me last week, thinks otherwise. He believes it’s the last remnant of a previously larger clone, probably dating back to the Altithermal. He feels that the leaves- which made me wonder if it were a Turbinella back-cross- more likely indicate an F2 hybrid, as they seem similar to F2 leaves produced in Cottam’s experiments.

It’s interesting that I only seem to find these hybrids by accident; I’ve never been successful on deliberate searches.

Tangent: Is it just me, or is there something really cool about a thing that only gets found when you’re not looking for it? Actually, I guess that’s like my keys on most days, so maybe it’s not that cool after all. Or actually, my keys would be in yet another category: Things that only get found when your wife is looking for them. 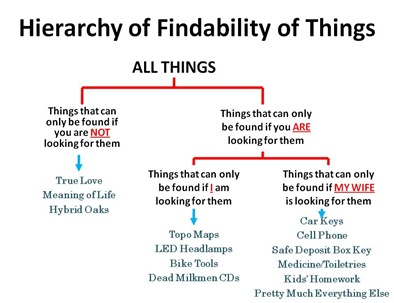 And if not for the new trail, dead-ending at that point and causing me to look around, I probably would never have noticed it. And if that trail had been cut on a just slightly different line, just a mere 15 feet or so up-slope… that last, isolated remnant of a possibly 5,000+ year-old clone would have been torn out without anyone ever knowing.

It’s the kind of thing that makes you wonder how many little things are just barely missed being noticed in the world.