Ah…. I feel wonderfully refreshed after yesterday’s rant, and ready to tackle some chemistry! Unfortunately this post turned out a little bigger than I thought (like pretty much all my posts) so I’ve split it into 2. Today I’ll talk about singlespeed climbing, granny-gears and CAM photosynthesis, and next post I’ll talk about gentle fast descents, big-ring pedaling, and C4 photosynthesis.

So everybody knows how a singlespeed works: pedal-power is delivered to a chain, which transfers the energy to a sprocket, which turns the rear wheel.

The most common form of photosynthesis, C3, has a few more moving parts than a singlespeed, but has a similarly simple overall formula: 6H2O + 6CO2 -> C6H12O6 +6O2, which means is that for every six water molecules and six carbon dioxide molecules taken in, C3 photosynthesis produces one big sugar molecule and six oxygen molecules.

That’s the overall formula anyway. In truth, it’s a bit of an oversimplification; photosynthesis (of all types) occurs in multiple steps, in which all kinds of cool chemistry going on. But for this post, and to understand the key differences between the 3 different types of photosynthesis, you only have to understand the first step: carbon fixation, or carboxylation.

Carbon fixation is the process by which the plant takes in CO2 and gets the carbon out of it. The end result of this first step is the compound 3-Phosphoglyceric acid, or PGA for short (diagram right). Every molecule of PGA has 3 carbon atoms, and that’s why this “standard” type of photosynthesis is called C3.

Tangent: I’ve decided that the molecular diagrams on Wikipedia suck. So starting with this post, I’m doing my own. And I have to say, they’ve turned out awesome. Check it out. Here’s the Wikipedia molecular diagram for Oxaloacetic acid, a compound I’ll be talking about in the next post, and whose formula = C4H4O5. 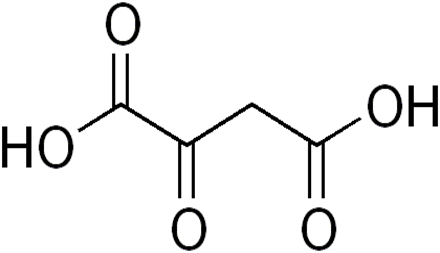 Where are the other 2 hydrogen atoms? And what about the 4 carbon atoms? Oh, I get it- they’re implied, at the cornices, because it’s like way too much effort to put in a couple of “C”s. Are you kidding me? My 7 year-old (either one) could draw a more informative molecular diagram than this. Now here’s mine:

Isn’t that nicer to look at? Everything shown, the right number of bonds between every atom… Dad would be proud. I am telling you, Wikipedia should use my graphics.

The key enzyme in carbon fixation is Ribulose-1,5-bisphosphate carboxylase/oxygenase, or RuBisCO for short, and it is the most common protein in the world. In the next post we’ll talk more about RuBisCO, and specifically, how it kind of sucks at its job, but let’s leave that aside for the moment.

Something like 95% of all plants use C3. The trees on your street, the grass in your yard (but not crabgrass), the flowers in your garden, and the PLTs and Aspens throughout the Wasatch- all of them use C3. It’s simple, it’s reliable, it works. Like a singlespeed.

But even the most ardent singlespeeding evangelist will admit that there are conditions when a singlespeed is not efficient, the most obvious being on extremely steep climbs. A cyclist who cannot pedal his/her singlespeed up a hill must either get off and walk, or… ride the hill with a geared bike. 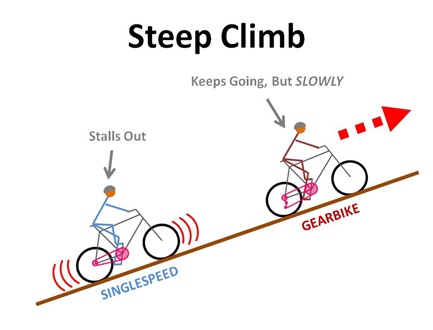 Similarly, there are conditions under which C3 is not efficient, and a great example in the desert is when it’s really hot and dry. C3 plants must have their stomates (pores) open to photosynthesize, and during a Sonoran summer day, the cost of water-loss through open pores is too great to keep them open. So C3 plants in the desert- just like singlespeeders on steep climbs- have 2 options.

The first is the equivalent of getting off and walking- or just not riding- and that’s Not Photosynthesizing. A great example of a C3 plant which adopts this strategy is Brittlebush, Encilia farinosa (pic left). Brittlebush was all over the place this weekend, a small bush with fairly lush-looking leaves, and a few were even beginning to flower. But by May or June those leaves will shrivel up and/or drop off, and Brittlebush will “park it” for the summer before kicking it back up in the Fall.

The second option is to modify the C3 process, and this is what cacti and agaves (pic right) have done. They’ve developed an alternate photosynthetic process that fixes carbon at night, and then produces sugars during the day. This type of photosynthesis is called Crassulacean Acid Metabolism (terrible name) or CAM for short, and it works like this:

At night CAM plants have their pores open and intake CO2. The carbon is fixed by an enzyme- not RuBisCO, but a different enzyme, called phosphoenolpyruvate-carboxylase, or PEPC for short- into malic acid, which is a 4-carbon compound. The malic acid is then stored in little organelles called vacuoles until sunrise. 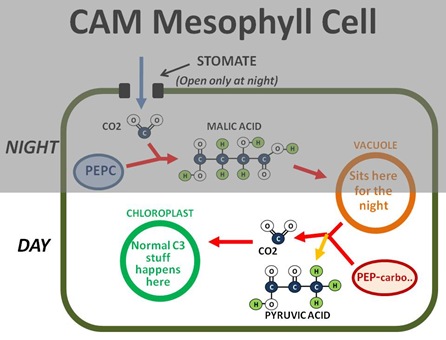 Woa. Are my science graphics getting seriously awesome or what?

At dawn, 2 things happen. First, the stomates close. Second the malic acid is broken down (by yet another enzyme- PEP-carboxykinase. Hey, I didn’t name them…), “un-fixing” the carbon (a process called “decarboxylation”) and the freed carbon is then fixed again by RuBisCO in the traditional C3 process.

Extra Detail: When the CO2 is taken out of the malic acid, the leftover stuff is a compound called pyruvic acid which gets combined with some other stuff to make more PEPcase…

CAM has been around for somewhere between 40 and 100+ million years (maybe more- I’ve found wildly varying figures) and has evolved at least dozens, probably hundreds, of times independently, all over the world. And not just in angiosperms, but also in cycads, at least one gnetophyte*, and even in lycophytes**.

*Long-time readers may wonder if this is my favorite gnetophyte and common Western shrub, Mormon Tea. Unfortunately no; Ephedra is strictly C3. The known CAM gnetophyte is the bizarre Welwitschia mirablis (pic right) of the Namibian desert, which employs a variant of CAM called “CAM-cycling” in which the stomates are still open during the day.

** I recognize that I keep referring to lycophytes without having properly introduced them. What can I say- it’s on my “to-blog” list…

Examples of CAM plants include not only cacti and agave, but also yuccas, pineapple, and some ferns, orchids and even grapes.

But the CAM analogy with a low-geared mountain bike doesn’t stop there. Climbing a steep hill in a granny-gear has an obvious disadvantage: you go slow. And CAM is like a mountain bike that’s always in granny-gear; it never grows fast. CAM is limited by the carbon storage capacity of the vacuoles, and as a result CAM plants, like cacti, tend to be notoriously slow growers. Outside of their environmental niche they compete poorly with C3 plants, which is why you don’t find CAM plants in places like New England or the Pacific Northwest.*

Next Up: Downhill on a Singlespeed & C4 Photosynthesis

ermmm.... you know you can insert your own graphics into wikipedia wherever you want, right?

What- and let just anybody use my graphics? These babies are exclusively for the VIP readers of WTWWU! ;^)

In all seriousness, I’ve always been aware of Wikipedia’s open-contributor model, but never really looked into it. I’ll try and spend a little time this weekend poking around and see what I might contribute. Thanks for the nudge.

Also in seriousness- I get that the shorthand-style chem graphics used on Wikipedia and other chem-related sites make perfect sense for real chemists, who know all this stuff inside-out. My issue has been that an amateur like me (and presumably most WTWWU readers) needs clearer, more explicit molecular diagrams if they want to actually understand the chemistry being described (which, much of the time, isn’t really all that complicated…)

Perhaps a better analogy for C3 versus CAM would be an ordinary bicycle (pedals connected directly to the hub) versus a single speed safety bicycle (ring-chain-sprocket).

(I do not know anything about C4, so I do not know if having the geared bicycle still in play will help with a further analogy.)

ahhhh the agave my favorite plant lecture in my "survival" classes. the indians used this plant for so many wonderful purposes.

another good comparison would be cell respiration and geared/single speed bikes. and image the fun you could have with making charts for those.....


thanks for the refresher course in c3/c4/chemistry. not that i needed to relive "organic chem" and "chem 104" again.

Oooh, makes my brain hurt. Just like it did the first ten times I tried to learned it! (grin)

As always, impressive graphics. Wikipedia can be fun, too, but endless...

"Also in seriousness- I get that the shorthand-style chem graphics used on Wikipedia and other chem-related sites make perfect sense for real chemists, who know all this stuff inside-out."

Stephen- when I read your comment I thought, "well, yes, but who rides a bike like that nowadays?" Then I checked out the penny farthing link commenter KV provided in the comments to the previous post, and it seems that your "improved" analogy is spot on!

Your diagram is incorrect.

PEP-Carboxylase is the enzyme that catalyzes the addition of C02 to phosphoenolpyruvate (PEP). The resulting compoud is oxaloacetate which is then converted to malate and transported to bundle sheath cells (C4) or stored in a lysosome (CAM) till stomata close diurnally.
Upon removal of the C02 from the malate you yield pyruvate and PEP, not PEPC.

Your analogy of the bicycle is quite poor.

Also if you can't understand simple chemical nomenclature you probably shouldn't be trying to explain complex biochemistry. There is a reason chemists use it - try drawing a long chain saturated tryglyceride and then tell me that its perfectly reasonable to draw every carbon and adjoined hydrogen.

If you are going to simplify chemical structures at least a) Use the correct colours (White for oxygen, red for hydrogen, blue nitrogen etc etc) or b) just simplify to the carbon atoms present.

This article gives a decent overview of of C3 and CAM however is a poor source of reliable information. Sources like these cost students marks and should be avoided unless being read purely for entertainment.

David- Back when this project was active, I always welcomed constructive corrections, additions and edits from folks who knew topics better than I, which helped me improve posts on everything from coralroots to moss IDs to linkage disequilibrium. But really, you just sound like kind of a prick.

That's your theory. Here's mine: Countless students have been turned off from fascinating science topics, including biochem, because their introduction to them has been through snarky academic jerks such as yourself. Later, same jerks collectively bemoan the scientific illiteracy and ignorance of a general population that doesn't get climate change or evolution or vaccines. Whatever.

Wow dig up a 5 year old post just to complain about something [almost no one cares about]. That was pretty annoying.

Interestingly I was still subscribed to comments so I got them all.