Something Is Happening. And All About Buds

I got a mild shock today. I was walking over to Starbucks from the office this morning and saw this- a bud on one of the Cottonwoods growing along Big Cottonwood Creek. It’s expanding, changing color. Something’s happening.

Tangent: So why- in these times of economic hardship- am I blowing $2 a pop for coffee at Starbucks while we have a coffee machine here in the office? I’ll tell you why- because our coffee machine is the most complicated, over-engineered, hi-tech piece of s*** I have ever seen. It’s got timers, displays, a built-in grinder, and all sorts of indecipherable lights, buttons and dials. I swear, I can re-cable a shifter/derailleur on my mountain bike faster than I can make a pot of coffee with this thing. I hate it.

So usually what I do is try to arrive at the office between 8:25 and 8:40AM, because this is just a few minutes after my tecno-wiz coffee-making coworker- let’s call him “Sid”- makes a pot. The key is to arrive after Sid makes the coffee, but not so late that the pot Sid has made is already sucked away by the other OCPs (Office Coffee Parasites) like me. But today I was late. Hence the walk over to Starbucks.

I realized today that I go through the same seasonal-mental process every year. When Fall ends and Winter sets in I’m always bitching about it. Bitching about the cold, about shoveling, about nothing growing, the short days. Then around February I sort of settle into winter. I get used to the cold, I get into an exercise routine that works for me with the snow & ice, and I forget about what summer was like.

Then one day I’m walking along, and I see one little thing, one thing that just isn’t quite normal- like that bud- and I think, “Oh yeah. Spring’s coming!” And somehow it’s like a total surprise, every year, all over again.

Ever since the morning, I’ve been thinking about all the other obvious Spring-hints I’ve been ignoring of late. The days are way longer. When I run before work, it’s in daylight; I haven’t put on that silly reflecto-vest in close to a month. And when I drove home last night, I was checking out the glow of the sunset on the lake, instead of driving home in the dark.

The other thing that hit me was what the coming seasonal change means for this blog. I hadn’t realized it until just now, but I’ve been enjoying a nice long vacation here at WTWWU. The point of this blog, the original point, way back when, was to force myself to pay attention to the onset and development of Spring by blogging about it. Since the Living Year ended last Fall, I’ve been pretty much free to goof off and go on about inversions and skiing and night-riding and Jesus Freaks and kooky photosynthesis deep-ends and wacky soap-opera tangents. With Spring coming up, I’ll have to get back to work!

I also realized there’s a bunch of winter-related stuff I’d always planned on getting around to blogging about before Spring, including a series on Magpies, a series on Stuff That Grows On Rocks, a post about Mule Deer. I also wanted to do a couple posts about exercise, and at least one where I make fun of a bunch of my coworkers. So many topics… so little time… But first, just what is the deal with buds anyway?

The Deal With Buds

Ever since the last Scrub Oak leaves fell in November, I’ve been keeping half an eye on the buds, which were already there when the leaves fell, and in fact were grown last summer. We tend to take buds on plants so for granted that we usually don’t appreciate what a clever innovation they really are.

Each bud, if you were to take it apart, is an onion-like construction of dozens of teensy-weensy overlapping leaves, protected by the few tough, hardened little outer leaves which comprise the bud scales. In about 60 days, as the temps warm, the interior leaves- called leaf primordia- will begin to grow and expand, forcing apart the bud scales and exposing themselves to the light. When you see buds swell, it’s because the primordia have started to grow. 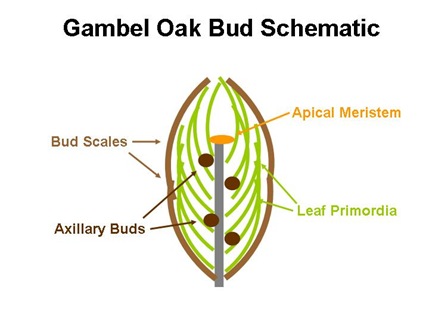 At the base of the leaf primoridia are little lumps. These are called axillary buds, and they’ll eventually form the next round of buds for the following year. (Somehow this reminds me of how human females are born with their ovaries already full of eggs; it’s like nature can never start preparing too early.) The primordia are all attached to a central stalk, the tip of which is called the apical meristem, and it’s from here that the shoot will continue growth.

Side Note: You can think of meristem cells as the plant equivalent of stem cells- undifferentiated cells which form buds, shoots and roots.

When the primordia are first exposed to the air, they’re a very, very light green color, but quickly darken up as cholorphyll is produced and photosynthesis (C3 in the case of Oak) kicks in.

None of this sounds that remarkable, until you think- why the bud? Why have pre-prepared leaflets in packages all over the tree, ready to go? What’s with all the little botanical 72-hour kits? (inside joke for Utah readers) Why not just start growing leaves when Spring comes? 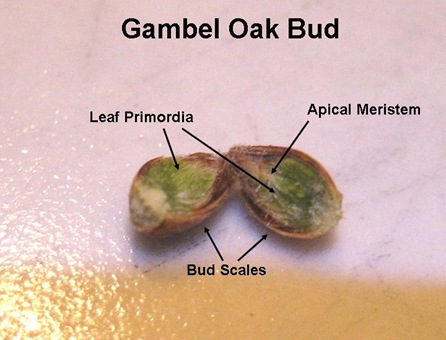 The answer is time. The challenge for a deciduous tree in a Northern clime is to squeeze as much photosynthesis out of the spring/summer/early fall as it can. If Gambel Oak started growing new leaves from scratch on May 1, it’d be several weeks before it was effectively photosynthesizing. But if you pay attention this Spring, you’ll see Gambel Oak go from opening buds to functioning juvenile leaves in less than a week. The development of buds is a beautiful and remarkable piece of engineering, and it’s worth checking out a few now so you’ll really notice the difference as they swell and open in the coming months.

Scrub Oak buds have cool trick; they don’t all open at once. In 2007, the Oak sprouted leaves up around Glenwild and Jeremy Ranch right around May 1. About a week later, there was a late spring snowstorm. The snow melted within a couple of days, and the next week I was riding up there with Rainbow-Spirit-Paul. I commented on how the young leaves had been destroyed by the storm and the leaves were now bare again, and Paul assured me that new leaves would sprout again shortly, which they of course did. Now that I know about “reserve buds”, I know how the Oaks “rebounded” so quickly that Spring.

I know that the Cottonwood buds are a false start; we’ll have another 5-6 weeks of serious winter ahead. But I’m grateful for the wake-up call. Time to start paying attention.

Next week, that is. Tonight we’re headed back down to St. George.

I have a question and realized you'd be the perfect person to ask. It has nothing to do with buds. Well, very little do to with buds.

We live in Suncrest at about 6300 feet. The trees in our yard are six years old, but they look scrawny and pathetic. Probably something to do with the climate here. Please don't ask me to identify them. They're currently covered with snow, not that it makes any difference.

Anyway, supposing that I like trees and would like something to grow to the point of being reasonably large but more important, healthy, what should I plant?

I've been noticing the aspen buds for almost a month around here. It's funny - I'm sure the aspens have gotten big plump buds at this time of year every year, but I've just noticed it this year.

Don't birds eat the buds? I've been wondering about whether that might be a big disadvantage to early budding.

I have a request for a post about early blooming plants - anything will do (but I was thinking along the lines of trees); maybe you've already done it earlier, but I just started reading your blog last month, so consider me ignorant! Up here (Vancouver Island, Canada) some of the earliest blooming things are the Hamamelis (witch hazel) and hazelnuts, and they're my recognition of spring's imminent arrival.

Ski Bike Junkie: I’m consulting with a higher authority. Give me a couple days and let me see if I can give you a good answer.

KB: So yes, some birds eat buds. But I’m not sure that early budding would make the plant more prone to bud-predation unless a) it was the only plant around budding early, and b) the birds that ate its buds were around. I’m not sure either is the case. In the case of your aspen, it’s the only angiosperm tree around in most of the places you encounter it, so whether/what other things were budding probably wouldn’t matter so much. Some of the birds- like Pine Siskins- that eat buds are already there, but others- Western Tanager and Black-Headed Grosbeak- won’t show up here for another 4-5 weeks and I’m guessing around the same time where you are? I think the bigger risk of early budding would be a cold-snap; the fleshier, wetter, swollen buds would be more susceptible to freeze-damage.

Amie: I sure will be blogging about trees blooming/leafing, and that’s pretty much how I started the blog last Spring. But I suspect you’ll have more exciting blooming activity sooner in coastal BC than we will here in Utah. We’re still probably ~4 weeks away from the first the earliest Glacier Lilies, and probably 7-8 weeks away from the Bigtooth Maple flowering. Globe Willows (an exotic) will be the first tree to bloom in the valley, in about 3-4 weeks.

"I realized today that I go through the same seasonal-mental process every year."

I have this same experience each year, too. Tonight, leaving the office, I wondered why it was so light out (relative to previous nights). It took a few moments to remember that days are actually getting longer, regardless of the lack of sun, bitter cold, and inches of salt piled-up on the streets.