So we’re back from St. George, and as usual there’s a bunch of things I want to blog about, including biking, plants, fungus and a tangent on tubeless tires. But first, I want to talk about our rental condo.

We stayed in the same condo as we did over Thanksgiving. We like this condo for a few reasons: it’s in nice condition, is in a great location, and includes access to a pool and hot tub. But the best thing about the condo from my perspective is the back yard. It’s a lava field, specifically the Santa Clara Lava Field.

I’ve lived in the West for close to 2 decades, and I think of all the things about the West that are hardest for a native Easterner to get used to, lava fields top the list.

When you grow up in Massachusetts, volcanoes are something you read about or maybe see on TV, but in pretty much anywhere in the West you’re less than a day’s drive from an actual lava field, or extinct volcano, or at least a cinder cone or two. In Utah it’s hard to drive more than 6 hours in any direction without running into lava in some form or another. Most lava fields don’t look like the photos you see from Hawaii, but rather like torn-up asphalt lots, with huge, jagged blocks of pavement turned this way and that. 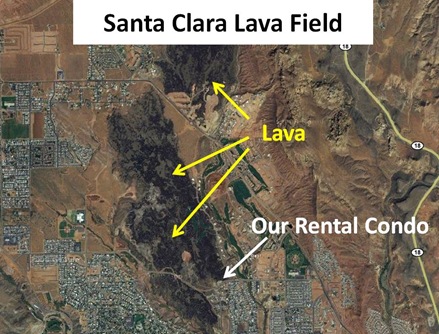 What’s really amazing about lava fields in the West is how recently they were flowing. The last of the eruptions of the Santa Clara Field were as recent as 10,000 years ago, meaning that there was a decent chance people were around to see it. The field was nearly 10 miles long, much of which is still exposed. Over the last decade developers have been diligently cutting into it with roads and cul-de-sacs, turning lava field into foundations and yards.

The field is wonderful to explore, filled with all sorts of nooks and crannies that are home to various ground squirrels, finches and bats. The terrain is slow-going for larger predators, such as coyotes, and birds seem to favor it at as stopover. Here’s a Sandhill Crane I photographed on the lava back in November. (Yes I know it’s a lousy photo, but the setting is kind of “art-y” and I wanted to use it. Note to Newer Readers: I posted this defense of my lousy wildlife photos last year.)

Tangent: The Santa Clara Field is only one aspect of St. George’s amazing geology, which I hope to better cover in a future post. In this photo, we have lava in the foreground. Behind the lava, the orange cliffs are comprised of Entrada sandstone, which is sedimentary rock formed from sea-bottom deposits roughly 170 million years ago, when Utah was partly covered by a shallow sea.

The mountains behind the sandstone, the Pine Valley Mountains, are even more interesting, as they’re a laccolithic range.

Most mountain ranges in this part of the continent are formed by various crustal plates pushing against one another. The Rockies and the Sierra are the most spectacular examples, but the same thing is going on all over the Great Basin. Another kind of mountain is a volcanic peak, and many of the high Northwest peaks- Rainer, Shasta, Adams, Hood, and even Cerro Pinacate to the South, are all of this type- extinct (for the moment) volcanoes.

But a laccolithic range is something altogether different; a laccolith is a huge pool of underground magma which is forced up between 2 layers of sedimentary rock. The pressure of the magma is so great that over time it forces up the overlying sedimentary layers, bending them as it does so. The underlying magma eventually cools and forms a solid igneous rock mass- the laccolith- which is typically flat on the bottom and domed on the top.

The laccolith underlying the Pine Valley Mountains is thought to be one of the largest laccoliths in the world. Two other great laccolithic ranges in Southern Utah are the La Sals and the Henry Mountains (both of which I mentioned briefly in the Line-Of-Sight post, and both of which are well worth a long weekend visit.)

As recent as the Santa Clara Field is, there are much more recent easily-accessible fields within a day’s drive from Salt Lake.

Craters of the Moon National Monument up in Idaho, with its fun caves and tubes, stopped erupting just 2,000 years ago. (pic right = Trifecta in lava tube there in August, 2006) Even more recent was the series of eruptions all over Southern Utah and Northern Arizona around 1070 AD. These eruptions left a series of real interesting cones and fields, the best known of which is Sunset Crater in Arizona.

2 other, slightly less spectacular, but more interesting, remnants from eruptions at that time are SP crater and Navajo Lake.

SP Crater (pic left, SP stands for “Shit Pot”. Hey, I didn’t name it), is near Sunset, but unlike Sunset you can scramble down into it, which I did in ’94 and it was a fantastic, albeit spooky, experience.

Closer to home, beautiful Navajo Lake on the Markagunt Plateau, East of Cedar City, was formed ~900 years ago when a lava flow blocked Duck Creek. (pic right = Navajo Lake with lava dam in foreground) The drainage and hydrology of Navajo Lake are absolutely fascinating, and a topic to which I plan to return come Summer.

Tangent: I should also mention the small cinder cone atop Little Creek Mountain. It’s small, and not worth a special trip, but is very obvious to anyone who’s ever driven out to ride the mtn bike trail. Unfortunately I can’t find any record of a date-estimate for it. I’m going to go out on a limb and guess it’s less than 20,000 years old, just based on its “look” and the history of the area.

But even more recent is the latest eruption in Utah, and this one is fascinating because it’s so close, so accessible, and yet so poorly known. Tabernacle Hill, just a few miles West of Fillmore, last erupted less than 700 years ago.

The area around it is littered with cinder cones, lava fields (pic above left, looking East), and a 2-to-3-story-deep lava tube that you can walk through from one end to the other. 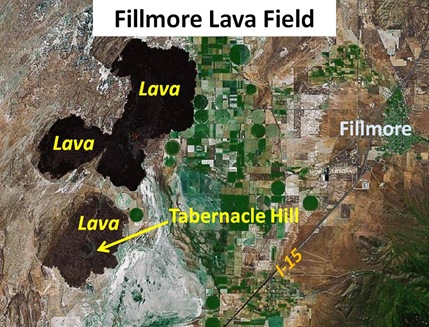 Awesome Wife (then Awesome Girlfriend) and I visited the area in ’97 or ’98.

This same area is still geologically active enough to heat Meadow Hot Spring, which though disappointingly cool from a soaking standpoint, is fascinating just to look at: clear blue water in a pool (pic left) that appears to be a narrow, bottomless pit.

Tangent: The absolute weirdest thing about Meadow Hot Spring is… this sign. Gee, I’m not sure, is it OK to skinny-dip here?

So anyway, St. George has cool geology, which of course we already knew, but it was extra-cool to have it in our back yard.

OK, back to biking and plants! (Oh yeah, and fungus, too…)

I enjoyed your report, and the pictures and geology. I live on the red rocks just east of Snow Canyon, I have a view of it from my house. I've never seen such interesting and gorgeous geology. Thanks for the info.

Interesting report. The picture from SP crater was a picture my group took on our geology trip. You should site pictures or information that isn't yours because of copyright laws.

honestly it doesn't matter because the image isn't making any money.
:)