Arizona Steve picked me up at the airport, and over the next 3 hours we drove out into the desert night.

Oftentimes, when I haven’t camped under open skies for a few months, my sleep is restless and fitful. And in truth as I’ve gotten older, even in my own bed I rarely sleep past ~5:30AM. But my sleep Friday night was the best, deepest sleep I’d had in probably a year, and when I woke up at 7:30AM in the middle of the Sonoran desert, just moments before sunrise, I felt fantastic. (pic right = foot of my sleeping bag at sun-up.) You know those “Lunesta”-type commercials where the lady wakes up with a smile and a yawn, and the sunlight is streaming in the window, and she already has all her make-up on and it’s not smudged or anything? I felt just like that. Except for the make-up part.

I woke up at the base of the Gila Range, the starting point of our first climb, Sheep Mountain. (pic left = me climbing it) The range is in the Cabeza Prieta national Wildlife Refuge/Luke Air Force Range, which entails getting a special access permit in advance.

Tangent: So it turns out they’ve tightened up the permit requirements since our last trip onto the range, back in 2005. You’re now required to watch a 45 minute video before being issued the permit. So a couple weeks ago, Arizona Steve dutifully reported to the BLM office, where the ranger-ette examined his/our application paperwork.

Arizona Steve: “Up in Salt Lake.”

Ranger-ette: “He needs to see the video too.”

Arizona-Fibbing-Steve: “”Oh, he already saw it.”

Arizona Steve then tried 3 times to watch the video on the broken BLM DVD player. After trying to troubleshoot it for ~10 minutes, the ranger-ette said, “If anybody asks you, tell them you saw the video, OK?” as she stamped the permit…

It also means hiking past occasional expended (and possibly unexploded) ordinance (pic left), and getting buzzed by fighter jets (crappy pic above, right). But it also means you pretty much never see another soul, and when Steve and I summitted, we were the first party to do so in exactly 365 days. (I love standing on peaks where no one else has stood for months or years, an experience I blogged about in this post last year.)

Way back last June, I compared visiting California to visiting an alien planet, not because the place is so weird (well there’s that too) but because the trees are so radically different than those here in the Wasatch. 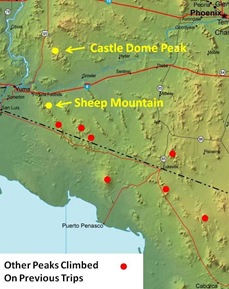 I wish I had saved that metaphor for this past weekend, because there’s no more “alien” botanical environment in the continental US than the Sonoran desert. When you wake up all of a sudden in January in Spring-like temperatures with bizarre cacti, shrubs and yucca all around, it really feels like you’ve been transported to another world. And in fact the alien planet analogy is even more appropriate here because of what’s going on at the molecular chemistry level all around, but I’ll get to that in a moment. 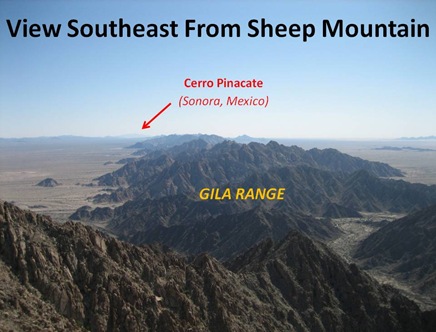 As “desert-like” as Southern Arizona seems, it’s really just the northernmost extension, or “fringe”, of the Sonoran; the real Sonoran is across the border, in Mexico,and if you’re ever able to drive even just 5 or 10 miles South of the border, the contrast is pretty obvious, with the tall Saguaros accompanied by almost equally-tall Organ Pipe and Senita cactus. (I hope to return to this “fringe” theme later this month when looking at Lodgepole Pine in Northern Utah.)

Tangent: Organ Pipe cactus, Pachycereus marginatus,(pic right w/Steve from previous trip) starts to show up down around Ajo, AZ, and there are only about 50 Senita cacti, P.schotti, that make it across the US border. The Senitas appear in force just a mile or two South of the border. They look at first glance like Organ Pipes, but there are 2 easily visible differences. First, the columnar trunks on Senitas (pic left from previous trip) have fewer, larger ridges than do Organ Pipe, and second, the ends of the trunks bear masses of dead-ish, hairy-looking spines, giving them an almost “bearded” look.

Senita tissues can’t handle freezing, and that’s why they’re forced farther South than Saguaros and Organ Pipes. Their Northern range-limit coincides beautifully with the Mexican border, so here’s a helpful tip: If you’re ever in a plane crash, or dumped out of a car by gangsters in the desert in the middle of the night (man I hate it when that happens to me) and morning comes around and you want to know if you’re in the US or Mexico, look for Senitas. 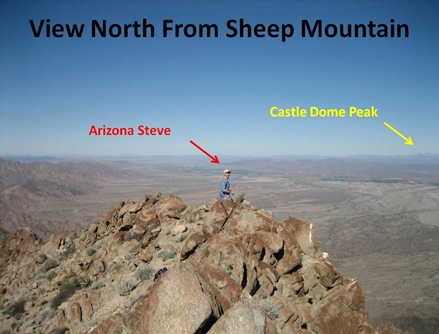 On Sunday we climbed Castle Dome Peak, roughly ~40 miles North in the Castle Dome range. This peak, while still a rugged, trail-less scramble, does get visited fairly often; a party signed the summit register the day before us, but the climb and the peak are even more spectacular and –surprisingly- a good bit easier than Sheep Mtn. Castle Dome is now my 2nd-favorite Sonoran summit, and I strongly recommend it. 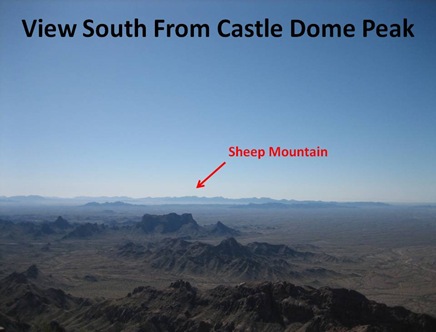 If you’re into plants, it’s hard not to stop every 50 feet on a Sonoran hike to take photos. Every shrub and bush is just so different. And even if you’re not into plants, chances are you’ll at least pause to check out the cacti.

There are somewhere around 1800 species of cactus (family = Cactaceae) in the world, and with one exception, they’re all native to the Western hemisphere; when you see them in someplace like Spain or Australia, it’s because someone brought them there. In Southern Arizona the most common and obvious types are Saguaro, Cholla (several different species) Barrel Cactus and Prickly Pear (several different species.) Cacti are angiosperms (so they produce true flowers) and are “primitive” dicots, unlike the neighboring agave and yucca, which are monocots. (For explanation of monocots vs. dicots, see this post.) These plants thrive on dry, seemingly water-less mountains, flats, and alluvial fans where it seem like no plant should be able to survive.

Cacti seem so big and green and healthy in the Sonoran that when you see them, you want to ask, “What’s their schtick? What are they doing that “normal” plants can’t do?” The answer is this: They keep their pores closed during the day. Doing so means that they conserve far more water; most desert non-cacti plants experience ~97% of their total water loss during the day. But closed daytime pores present a problem: Photosynthesis, which is powered by sunlight, requires carbon from CO2 in the air to work.

If they ever really find life another planet, and that life includes plants of some sort, you’d expect that maybe the kind of photosynthesis that evolved on that other planet might be different than the photosynthesis that evolved here on Earth. And this is where the Sonoran gets really alien; another type of photosynthesis has evolved. Actually two other types, and together with the “normal” type, all 3 occur all over the place in the Sonoran, and that is what makes this place so unbelievably botanically cool. 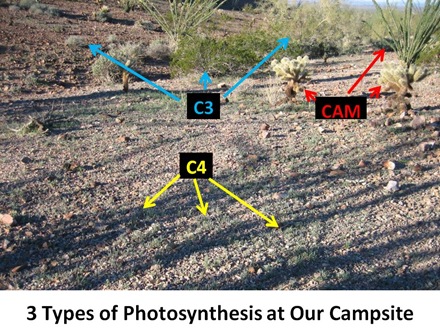 But before I introduce the 3 types, the obvious question is, “Why?” Why are there 3 types of photosynthesis? If one works better than others, then why don’t all plants just use that? And after noodling about this for a bit, I’ve decided the best analogy I can use is mountain bikes.

Stay With Me – This Analogy Works

The simplest form of photosynthesis, with the fewest moving parts, is called C3 (for reasons I’ll explain in the post after next.) It was the first to be “invented”, it works great, and it’s found all over the world. The other 2 types, CAM and C4, are actually supersets of C3, that include additional molecular-level mechanisms and machinery to modify and optimize how carbon is delivered to the basic C3 mechanism, and under certain, specific conditions, each offers significant advantages over C3 alone.

But before I can take this analogy any further, I must drop the whole issue of photosynthesis for a full post and share a few words about singlespeeds, and more to the point, the people who ride them.

I do disagree with one point, although it probably has no real impact on your metaphor. The first bicycles were single speeds, but the first Mountain bikes came around in the 80's and were geared bikes. Probably with 15 or 18 speeds.

I'm really looking forward to the comparison of single speeders to Jesus freaks. I'm pretty sure I'll agree with you on this one.

Chris- you're right of course, and I knew that. What can I say- when you use all these tortured metaphors all the time like I do, you have to give yourself a little license!