Note: Today marks a full year of this project. I’d intended to do a post about the project overall, how it’s turned out and where it’s headed, but I’m still caught up in the afterglow of last week’s Costa Rica trip, so I’m just gonna blast ahead, and come back to the “State of the Blog” issue sometime next week.

Special Note: This date also brings back odd memories of my childhood, as it is Greek Independence Day. Every year, on this day- or the Sunday closest to it- in the Greek Orthodox Church they would make a big to-do about it, and have us sing (I swear I am not making this up) the Greek National Anthem, a bizarre little tune with lyrics dominated by warfare, blood and death. There we were, a bunch of 10 and 12 year-olds from the suburbs with clip-on ties, bell-bottoms and Mod Squad hair-dos, singing about rising from the grave and killing Turks. Like I’ve said before, the Greek Orthodox Church is just weird enough to forever turn you off to organized religion without permanently screwing you up.

Let’s start this post off with a bang. Here it is, a male Resplendent Quetzal, Pharomachrus mocinno. If you’re any kind of a birder, you know that sighting this stunner is a Total Home Run. And what’s super-cool about last week, is that we saw Queztals- male and female- not 1, not 2, but all 3 days we were up in the cloud forest.

Tangent: I’ll explain “Cloud Forest” in tomorrow’s post. For now, you should know that they’re high, wet, dense forests that occur up in the mountains. At first glance they look a lot like like a “typical” tropical rainforest, but they’re different, cooler and very rare.

While I’m an amateur at pretty much everything I blog about (amateur botanist, amateur entomologist, amateur Spanish-speaker, amateur bike-racer… sometimes my kids make me feel like an amateur parent) I am a really amateur birder. I don’t have a “Life List”, it took me 12 years of living in Salt Lake to make it up to the Bear River Refuge, I don’t have a spotting scope, and I’m pretty lackadaisical about even refilling the feeders in the back yard. But I am telling you now, if you spend a week in Central America with a decent pair of binoculars*, and you come home anything less than completely enchanted with tropical birds, then you have no soul.

*The Nikon Monarchs were fabulous. Several of these photos I shot with my Canon PowerShot 450 through the Monarchs…

There are 6 species of Quetzals, all native to South or Central America. The Resplendent, the most stunning (my opinion), is the only one native to Costa Rica. It’s found only in the high cloud forests, is very rare, and its range has diminished considerably.

Tangent: The Resplendent Quetzal is the national symbol of Guatemala, but apparently hasn’t been sighted there for some years.

Quetzals are monogamous, territorial and have a distinctive call, which guides will mimic in their efforts to locate the bird. They’re extremely difficult to keep/breed in captivity and apparently will often kill themselves following capture (how they do so I’m not clear.) Quetzals have large eyes adapted to the dim light of the cloud forest interior. The male has a distinctive crest and 2 remarkably beautiful long, green “tail-feathers”, which are actually not tail-feathers, but simply “back-feathers” growing down over the squared-off “real” tail. The squared-off tail is common to the broader group of birds to which the Quetzals belong, called

Trogons, which are stunners in their own right. What do they look like? Well, since you asked, we saw those too! Here’s a male Orange-Bellied Trogon, Trogon aurantiiventris, another simply gorgeous bird, that we saw our first morning in Monteverede, about 30 minutes after the Quetzals.

The diet of Quetzals centers heavily around a series of trees called the “Little Avocadoes”, which are actually a number of different trees, all within the family Lauraceae*, which bear miniature avocado-like fruits.

*Lauraceae is a worldwide angiosperm family of some 55 genera and includes everything from Laurel trees to Cinnamon to Sassafras. CR has ~130 Lauraceae species, more than 1/2 of which occur up in the cloud forests.

The Quetzals pass the pits, serving as a dispersal agent for the tree.

Tangent: Little Avocados are known locally as Aguacatillos. Aguacate is the Spanish word for Avocado, and supposedly is derived from an Aztec root meaning “testicle tree.” (I don’t know if that’s true, but it’s too good not to mention.) I always remember the word for Aguacate, because the word “Abogado” in Spanish is one of those words known as a false cognate, meaning that it sounds just like an English word (“avocado”), but means something completely different (in this case, “lawyer.”) False cognates are a source of frustration to novice Spanish students; one of potentially most awkward is the word “embarazada”, which means “pregnant”, and not “embarrassed” (though ironically you probably will be embarrassed after using it incorrectly…)

Avocadoes by the way- real avocados, the ones we eat- Persea americana, are interesting in that they’re native to Central and South America and appear to have been domesticated independently multiple times in different Central American locations. Today there are 3 main varieties (West Indian, Mexican and Guatemalan) with a number of different cultivars of each. Long-time readers of Fatty’s blog may recall that I am a huge Avocado fan. If there’s ever been a more delightful fruit…. Whoa. I’m spiraling into a plant deep-dive. Must… stop… Must… get… back… to… birds…

Ancient Mesoamericans considered the Resplendent Quetzal divine, associating it with the snake-god Quetzlcoatl.

Though they prized the mail tail-feathers, they supposedly never killed the birds, but rather captured them and plucked the feathers. Today, the Quetzal’s predators include eagles and owls. In addition, Quetzal eggs and fledglings are frequently preyed upon by Kinkajous and this guy, the Emerald Toucanet, Aulacorhynchus prasinus, whom we spotted a bit later that same morning. That colorful beak isn’t just for show; it makes short work of eggs, nestlings and lizards.

Toucans, or Ramphastidae, are a family of 5 genera, all with brightly-colored feathers, and large, striking bills. They were of course a huge hit with the Trifecta, who wanted to know if every Toucan we saw was the same species at the “Fruit Loops Toucan.” Probably the most attractive Toucan we sighted in CR was this guy, the Fiery-Billed Aracari, Pteroglossus frantzii , which we spotted earlier in the week down in the coastal rainforest of Manuel Antonio. The Fiery Billed Aracari is more social than other Toucans, most of whom are fairly solitary.

We saw dozens and dozens of other forest and pasture birds. A favorite of mine at the Blue Banyan was the Scarlet-Rumped Tanager, Ramphocelus passerinii, (pic left, not mine) a cousin (same family, but different genus) of one of my local favorites back home, the Western Tanager.

And the free Hummingbird Garden by the Monteverde National Park entrance is the best place to watch Hummers I’ve ever seen. But I’d be particularly remiss if I didn’t mention array of spectacular shorebirds we saw down in the mangroves and estuaries, including Great Egrets, Snowy Egrets, Tiger Herons and Tri-colored Herons, among others.

My favorite shorebird was one we missed this trip, but which Bird Whisperer and I saw in 2007 up on the Nicoya Peninsula- the Anhinga, Anhinga anhinga (Easiest. Latin. Name. Ever.)

What’s particularly interesting about the Anhinga is that unlike most shorebirds- herons, ducks, geese, etc- it’s feathers aren’t waterproofed by oils. This helps it dive, swim and hunt for fish more effectively, but also means that its feathers become water-logged after a bit of time in the water. And so the Anhinga is most often spotted in its distinctive “drying” pose, perched on a branch, log or rock, wings spread in the air.

But one bird we saw almost everywhere, and which particularly interested me, was not a songbird or toucan or shorebird, but a vulture, specifically the Black Vulture, Coragyps atratus.(pic below, left, not mine)

Convergent evolution is cool because it’s a great showcase of how evolution creates beautiful sophisticated features, mechanisms and species in response to specific pressures and environments, and how given similar pressures and environments, it can reliably produce similar, sophisticated solutions repeatedly. I’ve blogged about a few other examples of convergent evolution; 2 of my favorite examples are CAM and C4 photosynthesis, which we looked at last month. Another great example from the animal world is moles. “Mole-dom” has evolved independently at least 3 times: once in the “Laurasia” (Eurasia/North America), again in the Africa, and incredibly, a third time in Australia (a marsupial mole!)

Here in Utah, and throughout the Western US, we have just one species of Vulture, the Turkey Vulture, Cathartes aura. But C. aura is just 1 of 7 New World Vultures (technically 5 vultures and 2 condors), of which 4 occur in Costa Rica. The most prevalent and obvious vulture in Costa Rica is the Black Vulture.

Side Note: Black Vultures also occur clear up through Mexico and the Gulf states. 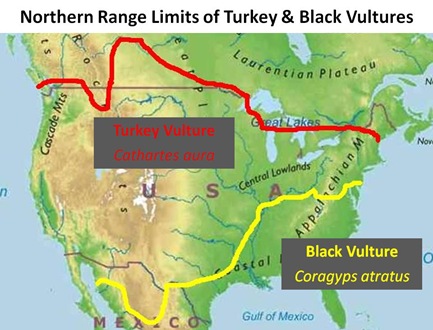 At first glance the Black Vulture looks like the same deal as the Turkey Vulture, except with a black head, and just a titch smaller. But you quickly notice that it seems to congregate in flocks (pic below, left- mine), and that behavior hints at the real difference between the 2 species: the Black Vulture is significantly more socially advanced. They scavenge in packs and share food location information.

Although 1-on-1 a Turkey Vulture can usually take on a Black Vulture, the latter works in flocks and routinely drives the solitary Turkey Vultures away from carrion finds. (Their relationship isn’t necessarily always antagonistic; the 2 species often roost together.) Black Vultures often locate recent kills late in the day, and then return en masse the following morning, the successful carrion-locators leading their unsuccessful flock-mates from the previous day.

Interestingly, Black Vultures lack a sense of smell, and locate carrion either visually, or by following other vultures that can smell, such as Turkey Vultures, or the Lesser Yellow-Headed Vulture, Cathartes burrovianus.

Side Note: Most birds- including all Old World Vultures- don’t have a sense of smell.

The sociality of Black Vultures has enabled it to develop another behavior largely unknown to Turkey Vultures: they hunt. And as one of the larger things they hunt is newborn cattle, they’re regarded as predators by ranchers. The manner in which they hunt newborn calves is not for the weak of stomach; they disable the calf by pecking at its eyes, nostrils and tongue, sending it into shock, and then pecking the disabled animal to death. Black Vultures are the only New World Vultures that hunt cattle.

Like another bird we looked at closer to home- the Brown-Headed Cowbird- it’s hard to feel particularly sympathetic toward a bird whose lifestyle seems so creepy. But on the home front, Black Vultures look pretty good compared to Cowbirds; they’re attentive, caring (and monogamous) parents, sharing in chick-rearing duties and feeding their young regurgitated carrion for up to 5 months. And besides, some of the things we do to calves aren’t so nice either.

Next Up: So What About All Those Freaky Tropical Plants?

Wow, those are amazing birds.

My desire to visit Costa Rica is growing with each post.

I need to learn more about birds - they are fascinating creatures. I got a bit of the birding bug when I read "The Big Year" and saw the astounding Birds of Paradise on the BBC / Discovery Channel "Planet Earth".

I saw that Planet Earth segment as well- it was great.

FWIW, your kids are perfect ages for CR, and your family sounds pretty outdoor-oriented. I think you guys would really enjoy a vacation there. Definitely worth thinking about!