3 Early Exotics And All About UTRider’s Pee

We got a fresh coat of white yesterday, so I’ll be off the trails for a bit. But this recent warm snap was a strong enough dose of pre-Spring that I actually saw a couple of early-bloomers out along Shoreline earlier this week. Specifically, I saw 3 plants flowering or blooming along the trail, and what’s interesting is that all of these are non-natives. 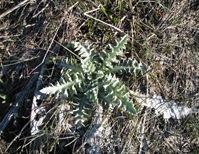 The first I blogged about last year- Musk Thistle, Carduus nutans. I described it in detail in this post during Weed Week (Man, was that a great week or what?) so I won’t jump into it again here, but I’m just amazed every year at how early this thing sprouts and how darn fast it grows. This weed does not dink around. But I’ve learned a few more things about Musk Thistle since last year, and one of the most interesting is the frustrating history of attempts to control it via biological agents.

In the early 70’s Rhincyllus conicus, a weevil native to Eurasia and Africa, was released in multiple locations in the US. R. conicus preys upon Musk Thistle in the Old World, and the idea was to use the weevil as a control against the spread of the thistle here in North America. The success of R. conicus against C. nutans was mixed, but by the late 1980’s it was also attacking a couple dozen other species of thistles, most of them native to North America, and at least one of them, the Platte Thistle, Cirsium canascens, of the upper Great Plains, is now seriously threatened by the weevil. It’s a great example of just how darn complicated introductions of alien species can get… (For more on the weird genetics and sexuality of weevils, see this post.) 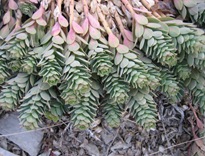 Second is a plant which I should’ve profiled last year in Weed Week, but didn’t, due to my own ignorance of it until my friend Cory asked me why I didn’t include it in Weed Week. It’s Donkey-Tail Spurge, Euphorbia myrsinites, also known as Myrtle Spurge and this one is particularly insidious for 2 reasons. First, it was introduced deliberately.

Euphorbia is a diverse, worldwide genus of more than 2,000 species, some 850 of which- including E. myrsinites- are succulents. Donkey-Tail Spurge is native to arid areas of Southeast Europe and Turkey, thrives in dry conditions, and has long been a popular plant for xeriscaping. But having been introduced to North America by well-meaning gardeners, the plant has escaped cultivation and become a serious and problematic pest in the Western U.S. (Interestingly, it’s not a problem in the Eastern US, probably because the climatic conditions here in the West are a much better match for its native habitat.)

Tangent: Euphorbia is also an interesting genus in that it includes C3, C4 and CAM species. So which is E. myrsinites? I haven’t been able to find out. It’s a succulent, which suggests CAM, but it grows so darn early and fast I’m more inclined to go with C3, or perhaps both (CAM-cycling.) 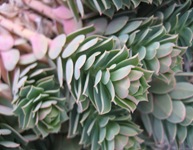 Second, it can be highly irritating- or even worse- to humans. Donkey-Tail Spurge, like all Euphorbia species, produces a milky sap which can cause a caustic reaction upon contact or ingestion. Skin contact with the sap usually results in bad blistering 2-8 hours later, and eye contact usually requires prompt medical attention. Most cases involve small children playing with, or even eating, the leaves or sap. So when you see this guy, don’t go picking or playing with it.

But the possible negative effects might even be worse. The irritating chemicals in E. myrsinites sap are a type of chemicals called diterpene esters.

Chemistry Details: Terpenes are a broad class of organic compounds produced by many plants (and, interestingly, some insects.) They’re the main ingredients in stuff like resin and turpentine. Terpenes are constructed of units of isoprene, which is C5H8 (digram right). A diterpene is a terpene with 4 isoprene units, and a base formula of C20H32 (which is slightly different in the case of each specific diterpene.) Esters are organic compounds formed by the reaction between an acid and an alcohol. Many are very fragrant and are used in artificial flavorings. When you eat a grape, apple or cherry-flavored lollipop, you’re tasting esters (but not diterpene esters- lollipops are safe!)

Diterpene esters can provoke a range reactions, many of which are still poorly understood. The related plant Croton flavens (Euphorbia and Crotons are sister-genera within the family Euphorbiaceae) is used on the island of Curacao to make an herbal tea, and its roots are chewed by the islanders. Curacao islanders have for years suffered from high rates of esophageal cancer, and the leading suspect is the diterpene esters in C. flavens. So really, don’t mess with it.

(Ironically) I photographed this Donkey-Tail patch along Shoreline behind the Huntsman Cancer Center, but in a few weeks you’ll see it all over. There’s always lots of it along the lower stretches of the trail up Dry Creek, and Pipeline Trail in Mill Creek Canyon is practically lined with it in the Spring.

Tangent: I’ve blogged previously about Poison Ivy and the photophytodermatitic sap of Cow Parsnip, each of which has a completely different chemistry going on. It’s interesting how plants- and nature in general- have reinvented poisons over and over again.

The third early-bloomer is already flowering, and in fact is one of the flowers I included in my very first post. Sally later ID’d it for me as Crane’s Bill, Erodium cicutarium, also known as Redstem filaree.

It’s tiny but beautiful, and for years I’ve thought of it as the first Utah wildflower of the season. Alas, I learned this past year that it too is an exotic, native to the Mediterranean Basin. It invaded the American West in the mid-1700’s, and was traditionally believed to have arrived with livestock feed in the Spanish missions in California. But more recent research indicates that it was introduced by the Spanish to Baja, and then made its way North on its own, beating the Spaniards to Santa Barbara by at least several years.

Exotic or no, it’s still pretty, and you’ll be bound to see it over the few weeks if you bike or hike in the foothills.

A reader- let’s call him “UTRider”- recently emailed me and said that he’s been eating a lot of asparagus lately and noticed it made his pee smell “pungent”. He asked if I knew why.

This is a good question, not only because there’s organic chemistry involved, but more importantly, because it gives me a chance to talk about how much I love asparagus. Mmm- I love it! And the older I get, the more I love it. In our house Awesome Wife, Twin A and I really like it, but the Bird Whisperer and Twin B absolutely hate it. Until recently we frequently had it at dinner, which always involved a protracted negotiation regarding how many stalks needed to be consumed, and sometimes Bird Whisperer would do this little routine where he gags on it, and Twin B would hold her nose while chewing it, and finally we’ve given up and give them an alternate “green”, while we eat it all ourselves.

Asparagus, Asparagus officinales, is a monocot and a member of the order Asparagales, and so is related to things like yuccas and Joshua Trees, and (a bit more distantly) lilies. The part you eat is the young shoot, and the “leaves” on the tips are actually modified stems. Green Asparagus is eaten worldwide, but White Asparagus is a delicacy available mainly in Northern Europe in May and June. (In May, 2003 I happened to be in Germany for work and had White Asparagus. Wow. Unbelievably fresh and “meaty” and delicious.)

I’m getting hungry typing this. Anyway, back to UTRider’s question, the answer to which is: They don’t know. Actually, scientists have a pretty good idea, but don’t know the specific agent(s) or reaction involved.

Asparagus contains 2 highly suspect chemicals. The first, methyl mercaptan (CH4S, diagram right), is found in garlic, eggs, cheese, skunk spray, and- I hate to say it- feces. The second, asparagine (C3H8N2O3, diagram below, left), is found in dairy products, fish and nuts, and has a distinctive smell when heated. It’s pretty certain that the action of digestive enzymes breaking down one or both of these substances generates the distinctive odor, but exactly what that reaction is remains unknown.

This was proved by 3 separate tests- one in France, one in China and one in Israel. All involved hundreds of subjects sniffing many, many samples of urine. I am so never complaining about my job ever again.

Asparagus roasted with olive oil and kosher salt--doesn't get any better. Until the next time you pee, at least.

Interestingly, several of my siblings can't smell skunks. I wonder if they can smell asparagus pee?

Oo. I *so* see a science experiment coming up at your next family-hootenanny. You *have* to serve asparagus and blog about the results. I can't wait for the post!

Myrtle spurge is truly nasty stuff. My daughter got into the stuff twice - we didn't make the correlation the first time, blaming it on a food allergy - and the results were truly horrible. Enormous raised blisters over about 1/3rd of her body (including bits that clearly didn't have direct contact with sap); extreme pain; permanent scarring in some spots.

Keep your kids out of this stuff. It's no joke, and it can apparently afflict sensitive adults just as badly.