Strangler Figs are all over the place down in the lowland rainforests, but they’re even more obvious and more fantastic (pic right) up in the cloud forests, where we spent the last 3 days of the trip. 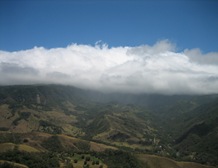 Tropical Cloud forests form atop mountain ridges above 1500m which are almost always enveloped in clouds (pic left), and so receive nearly all of their moisture as mist.

They’re sort of like a cool-to-chilly rainforest, expect that the epiphytes have gone utterly berserk. Everywhere you look, on every tree (pic right- take a sec and click on it. Look at all the stuff growing on that one tree. Is that insane or what?), are mosses, lichens, bromeliads, orchids, heliconias growing all over everything (even wooden park benches are mostly moss-covered.) The interior of a cloud forest is generally damp, misty and dim. But on a (rare) sunny day, a cloud forest is, hands-down, the most beautiful place I’ve visited on the entire planet. 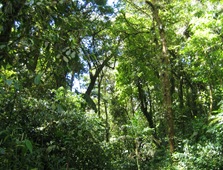 Of the 3 days we spent in the cloud forest, 2 were bright and sunny. To be surrounded by light and beauty that intense for the better part of 48 hours is almost a bit of sensory overload. When you get back down to the pastures of the lowlands (or worse yet, Northern Utah in March) it’s almost as though the cones of your retinas have been burned out; nothing seems to have any color for a few days.

Speaking of another way of being a tree, another first for me were the fabulous tree ferns, which grow up to nearly 20 feet all over the place in Monteverde. Ferns are ancient and fascinating plants.

They’re true plants, with a vascular system and true real leaves, but they’re not seed plants, instead reproducing via the alternating gametophyte-sporophyte generational strategy we saw when we looked at mosses. So every Fern you see is chromosomally haploid, like a sex cell (sperm or ovum) in a human.This guy is Sphaeroptyrus brunei, or Monkey Tail Tree Fern, so named because its uncurled proto-fronds look like monkey tails.

Besides the tree ferns, there are both “shrubby” ferns and epiphytic ferns growing all over the place. Check out this one- it’s called Filmy Fern, one of the 37 species of the genus Hymenophyllum found in CR. Is that alien-looking or what?

Another first for me- and a long-awaited one- were Clubmosses and Spikemosses, which are Lycophytes (pic left). On the complexity spectrum, Lycophytes sit between Mosses (bryophytes) and Ferns; they have a true vascular system, but not true leaves, and reproduce via the same alternating-generational strategy as Mosses and Ferns.

Why You Should Care About Ferns and Lycophytes

Even if you’re not a plant-nut, there are at least 2 reasons worth knowing about Ferns and Lycophytes. First, the very first forests, long before there were angiosperms or conifers or ginkgos or even cycads, were composed of Ferns and Lycophytes. Tree Ferns I just mentioned; back in the Carboniferous period, Tree Ferns existed that dwarfed anything we saw last week. But even more interesting, there used to be Lycophyte trees (diagram left.)

These ancient trees, belonging to the long-extinct genus Lepidodendron, together with Tree Ferns dominated the planet for around 50 million years before seed plants showed up and eventually evolved into trees. Lepidodendrons of all species had a simple, distinctive form- a straight trunk that branched into a “Y”. Think about that; for 50 million years, there were pretty much just 2 tree shapes in all the forests of the world- Tree Fern, and “Y”-shaped.

Tangent: It’s simply amazing to me that the only living relics of the mighty Lepidodendrons, which dominated the planet so thoroughly, for so long, are little moss-like things. Really makes you think about evolution, and how things turn out in the long run… 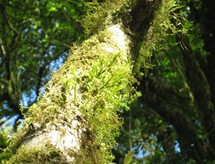 The second reason is more practical: the gasoline that powers your car, the natural gas that heats your home, the diesel fuel that powers the truck that carries the fresh avocados to your neighborhood Albertson’s, and the coal that powers the turbines that produce the electric current that runs the PC you’re reading this on,- all of those and virtually every other petroleum product that powers our modern world- were produced by those ancient Lepidodendron/Tree Fern Forests. Coal and petroleum deposits are the final end-products of 300 million year-old forests. Our entire civilization is powered by Ferns and Lycophytes.

The rich green light of the Cloud Forest is accented with countless flowers of all different colors. Orchids, Pavón de Montaña, Goldfish plants (pic right), there are too many wonderful flowers to cover in just one post, so I’ll zoom in on one – Heliconias. These beauties, which occur all over the country, both in the cloud forest as well as in the lowlands below, are striking in both form and color.

At first glance, they appear much like a Bird-Of-Paradise–type flower. But there’s a clear difference: Birds-Of-Paradise are brightly-colored flowers sitting in a green, pointy-cup-like bract. Heliconias are dullish-green flowers sitting in a brightly colored pointy-cup-like bract. With the former, the flower itself attracts the pollinator; with the latter it’s the color of the bract which first catches a Hummingbird’s eye. This one (pic left) is Heliconia monteverdensis, which occurs mainly up in the cloud forests, but you’ll see Heliconias all over the country.

In a land so foreign and a forest so strange, it’s somehow comforting to latch onto something familiar. For me, a constant in my travels has been Oaks. From the foothills of the Wasatch, to the rolling hillsides of California, from Hyde Park in London to Zacatecas Mexico to the hardwood forests of New England, I’ve long enjoyed seeing and recognizing Oaks of all different types. And even here, in this bizarre forest in the clouds, I found one- this wonderful, massive, ancient oak, Quercus costaricensis. (pic right)

Another constant for me in my travels of course has been pines (of which last week’s Blue Piñon was one example.) And though you’ll often see Pines along the roadside in Costa Rica, they’re not native. The most commonly planted Pine is Pinus ocarpa, a 5-needled Pine which occurs natively as far South and close by as Nicaragua. But South of the Nico-Tico border, the range of Pines ends, and where conifers occur again they’re Araucarias or Podocarps. (For a description of Podocarps, see the last paragraph of this post.)

Podocarps make it up into Central America clear into Southern Mexico, and having never seen one in the wild, I had half an eye toward spotting on on this trip, but didn’t think any were common in the areas we’d be visiting. 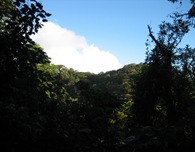 On Friday afternoon, after hiking in the Santa Elena cloud forest, we returned to kick back around the hotel for a few hours. While Awesome Wife and the Trifecta relaxed, I took the car out to look for another trailhead, and a quick pre-dinner hike. As I drove up a dirt road looking for the trail, I passed a lithe, brown-haired, middle-aged gringa walking up the road. She looked somehow familiar… from a book…

I hit the brakes, backed the car up and rolled down the window. “Excuse me,” I asked, “Are you Willow Zuchowski?” And in fact it was her, the guidebook author herself, a bright, charming woman with whom I spent the next 15 minutes chatting about her wonderful book and trees of the area. Toward the end of our chat, I asked her about Podocarps, and she told me that they did in fact grow in Monteverde, and where to find them.

Tangent: I actually have several stories about running into (and recognizing) guidebook authors. My favorite was about 3 years or so ago, when I rescued Steve Allen from a sand-trap in which his van was stuck in the San Rafael Swell. 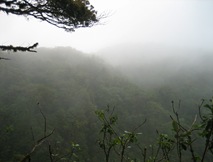 The following morning, the day we had to drive back to San Jose, I rose before dawn, padded quietly out of the cabina so as not to disturb my sleeping family, and drove back to the Monteverde park entrance. At park opening, 7AM, I was the first visitor to enter the park. Unlike the previous 2 days, it was a “typical” day, enveloped in cloud-mist, dim and mysterious. For the next 3 hours I hiked alone, passing just 4 other hikers, 2 of them rangers. I finally arrived at the landmark and junction from where Willow told me to look, but whether due to the thick mist, or my own poor recognition of the species, I was unable to spot the Podocarp I knew was within 100 meters of me. 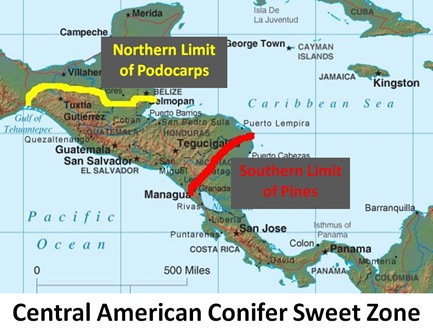 So I have yet to see a Podocarp in the wild, and this will be something I’ll have to seek out in another, future, adventure. The forests between Southern Mexico and Nicaragua are in what I think of as the Conifer Sweet Zone, where Northern Pines overlap with Southern Podocarps. Though I have yet to visit this region- Chiapas, Guatemala, Honduras, etc.- it’s on my list.

Anyway, it was an awesome vacation.

Fantastic. And on a cold day like today, I'm so ready to head south.

KK- thanks. And you're telling me- this has been a tough week to come back to UT. I cannot get warm...