The Quiet Order of the Brown World

No heavy science today; I’m still recovering from the lichen post. (As I suspect is any reader who actually read the darn thing…) 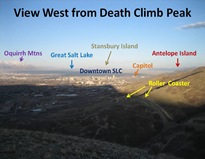 I’ve been doing the Roller-Coaster, and bits and pieces of Shoreline every morning this week, and yesterday I had the perfect “Short Loop” ride: My house to the zoo, up Death Climb to Death Climb Peak, ride/hike over to Roller Coaster, then back out and home. 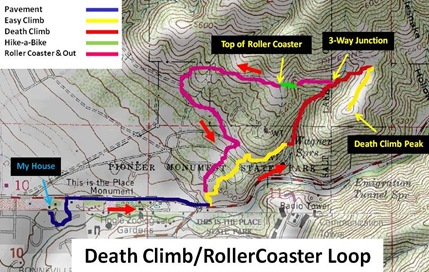 Tangent: This was my first Death Climb ascent of the year. I’d avoided it until yesterday with the convenient excuse of “it’s probably too muddy”, and in truth as I started up I think I was secretly hoping for a section of impassable mud/snow to give me an excuse to put it off for another week or so. But no such “luck”; the trail was just fine all the way. I cleaned it (which means no dabbing at the 3-way) no problem, and in fact I was amazed at how easy the climb felt for this early in the year. This is the strongest I remember feeling this early in the season. All that winter-running must be paying off… 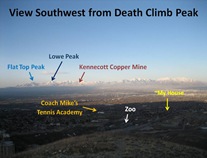 What I liked best about the ride was the odd, hard-to-describe sense of order about it. My riding was flawless, and my bike was 100% dialed in- no creaks, squeaks, mis-shifts, exactly the right shock and tire pressures. (The tubeless thing is totally dialed in now.) And somehow, that sense of order was in the world around me as well.

Sometimes early in the morning I’ll wake up before Awesome Wife and the Trifecta and go downstairs and have a cup of coffee in the half-light, maybe read the paper, or watch the birds at the feeder for a few minutes before the day really begins and I start getting ready for a ride/work/whatever. I always like this time. It’s quiet, calm, orderly, and my thinking is clear and unbroken. 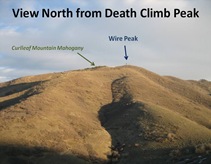 Out in the foothills, there’s a similar early-morning-feel right now. There’s a week or two at the very, very beginning of Spring in the foothills, when the snow’s melted and the mud has just barely dried, but almost nothing is growing, and everything’s still brown. And I realized on yesterday’s ride that I actually really like this “Brown World” before Spring. It’s quiet, it’s orderly, it’s predictable. Everything is in its place, there are no distractions, and you can sort of hear yourself think in a way that you can’t during the middle of a Spring or Summer day with birds and bugs and leaves all rustling and buzzing and chirping like crazy. The effect is enhanced by the mellow half-light of dawn- the lack of harsh, overhead sunlight brings structure and a subtle beauty to the browns and grays of the leafless hillsides.

Tangent: The only rustle and bustle on this ride in the mornings these days is the occasional Coyote yip, and this herd of Mule Deer, which has been hanging around the South-facing slope of Wire Peak, and which I’m pretty certain is the same herd that was visiting my yard nightly until about 2 weeks ago. All winter long we’ve woken up to deer tracks in the yard, and this brings up an interesting contrast between Deer and Elk: When heavy snow cover limits their foraging, Deer come down into yards in the city. But Elk don’t; they go up and look for open windswept areas.

I mentioned in a previous post how Rudy Drobnik related to me how difficult it is to construct effective highway crossings for Elk compared to Deer or Moose, and this moving-uphill behavior appears consistent with that. They seem to avoid human construction and habitation more so than other native ungulates.

BTW, I have a great deer-carcass-removal-from-my-yard story, but I’m pinched for time, so that’ll have to wait for another tangent, in another post… 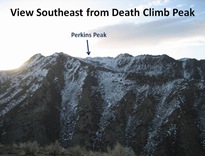 The sense of order and clear-thinking stuck with me throughout the day, and I hope to enjoy a few more Brown World Days in the coming week or two.

But even this week, I’ve seen the first, earliest, bursting blooms of green, hints of the explosion of life just around the corner, and the coming, sudden, spectacular end of the Brown World.

Next Up: 3 Early Exotics

I really wish you hadn't said the Death Climb is all clear and ready to ride. However, now that I know it's good to go I can't see myself staying away too long. Unfortunately, my first attempt may lead to my succombing to the name and become my last!

Looks like this storm cycle will let you put the Death Climb off another few days, which you can use to prepare by training and eating plenty of asparagus!

Im so glad you said that about the lichen post... It made by brain hurt (I did read the whole thing), but I didnt say anything so as to not sound stupid ;)