So I had a serious post planned for today, a post I wanted to do last week (but got side-tracked blogging about Costa Rica) about a year of doing this project, how it turned out, where it’s headed, etc. But I’m putting it off another day so I can do this rant instead. There’s no science or plants or birds or anything in this post, just me ranting, so if that’s not your thing, check back tomorrow.

Saturday it broke 50F. I did a great 80 mile ride with several teammates that took us out to the Western side of the valley, out by Kennecott and along rolling roads that haven’t yet been cluttered with tract housing or strip malls. 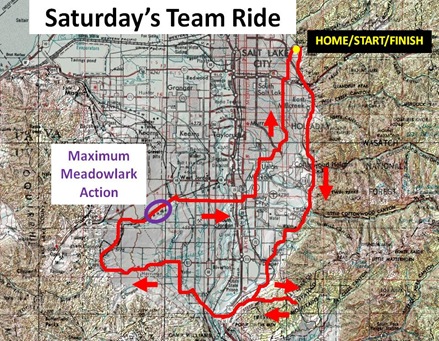 Tangent: An 80-mile “base miles” ride with my teammates is way more exhausting than an 80-mile ride by myself, or for that matter, with non-teammate biking friends. When I ride with teammates, they’re all- pardon me- we’re all constantly sprinting and catching and trying to out-do one another on climbs, etc. I pedaled into the driveway pretty wiped…

It was warm and sunny. I saw a couple of red-tailed hawks circling overhead, and for a stretch of about 3 miles I heard the songs of Western Meadowlarks, almost continuously, one after another.

Tangent: The song of the Western Meadowlark is my absolute favorite “Spring Is Here” sound. It’s such a wonderful, melodic song, and though you’ll never hear it Salt Lake/suburbs proper, if you go just a few miles West, toward Herriman, Magna, Toole or Stansbury Island, they’re all over the place. But only for a few weeks do they sing like they do now, so if you live along the Wasatch Front, do yourself a favor and find a reason to get out West sometime in the next few weeks.

Special Note to UT Cyclists: The Hell-of-North race course is a great area to see/hear Meadowlarks. Yet another reason to pre-ride the course.

Sunday I woke up, looked out the window and saw the storm coming. I jumped on the mountain bike, pedaled up to the zoo and started riding the lower trails, those (barely) dry enough to ride. Within minutes the scattered flakes turned into a grappl-y-sleet that stung my face. As I pedaled back down Sunnyside Ave. head-on into the ferocious wind, I rode 1-handed, the other shielding my lower face from the sting.

Within 2 hours we had 4 inches of snow in the yard, and this morning it’s about 8. Saturday's ride now seems like vague dream, and this brings me to the point of this post, which is that a Utah Winter is exactly like a Crazy-Stalker-Ex-Girlfriend.

Special Note to Female Readers: Yes, my analogy is about Crazy-Stalker-Ex-Girlfriends. It works equally well for Crazy-Stalker-Ex-Boyfriends (of whom I’m pretty sure there are more of in the world.) But I’m a straight male, so I have no experience with them.

I’ve been happily married for many years. But I still remember the various highs and lows of dating and relationships back in my younger days. In the beginning, there’s nothing more wonderful, fascinating and exciting than a new girlfriend. You want to spend every moment with her. You think about how empty and unfulfilling your life was before she was part of it. You think everything she does is so clever, so witty. You think every part of her is so beautiful and lovely.

Back in December, Winter’s a lot like that too. Every snowfall is magical. (pic left = Bird Whisperer & me in Yellowstone, Feb ‘01) The patterns of the ice are endlessly fascinating, and the tracks of deer and other critters in the fresh snow at dawn tell hints of countless little night-time stories.

And then there’s skiing. The first great powder day of every Winter is every bit as thrilling and wondrous as a first kiss. And for several weeks following, you can’t wait for the next ski day, and you start judging the quality of the entire season by how many ski days you get in.

But after a time, if the girlfriend isn’t “the one”, the magic starts to wear off a bit. Her clever witticisms aren’t quite so charming.

She isn’t quite so fascinating or engaging, and spending all your free time with her doesn’t seem so fun anymore. And you start to notice that she doesn’t really like your friends, and you’re not that crazy about hers, and you don’t like the same music on road-trips, or read the same books, or really even see the world the same way. Still, she’s a bright attractive woman, and you do your best to make things work. But nevertheless, things aren’t like they were. And, if you’re completely honest with yourself, you admit that you find yourself noticing and admiring other women.

Similarly, after a couple of months of Winter, the novelty wears off a bit. Yes, skiing is still fun, but you don’t rush outside every time new snow falls. You find yourself looking forward to little breaks, like work trips to Southern CA, or weekend road-trips down South. And on a daily basis, the logistics of Winter become tiring: the shoveling, the scraping the windshield, the white-knuckle driving, the badgering the kids to play outside (“Oh, quit whining- it’s not that cold!”) And, if you’re completely honest with yourself, you find yourself lingering in the garage, admiring your bikes, thinking about what it would be like to embrace them again.

Finally, in the end, you break up. You may end it, or she may dump you, and that’s the end of it. Sometimes you may feel down for a bit (especially if she dumps you) but in any event, it’s over. You move on to the next stage of your life, ready to live, and grow and love all over again.

Only sometimes you don’t. Your ex keeps hanging around, or finding reasons to call, or seems to always be where you’re going, and you just can’t seem to shake her.

And then sometimes, you may actually find that the woman you thought was the most amazing person ever to grace your life is actually a complete, nut-job-mental-health-basket-case, who is so phenomenally over-the-top-batshit-crazy that you simply cannot believe you ever wanted to be within 100 yards of her. And yet she won’t go away, she’s determined to reach “closure” or “resolve outstanding issues” and you just want your old life back…

A Utah Winter is exactly like one of those crazy-stalker-ex-girlfriends. It’s so wonderfully charming when it first shows up and it turns the whole world into a magical wonderland. But by the end of March/early April it simply will not go away. It won’t listen to reason or acknowledge the obvious- that the Equinox is past, Spring has begun, and your relationship is over. It keeps coming back, determined to mess up your new relationship (Spring, biking, hiking, being outdoors.)

Winter, we are done. What we had was truly wonderful. But it’s over; we’ve grown apart, and it’s time for both of us to move on. I need to bike and camp and sit out on the deck, and you need to go see the penguins down in Antarctica or do whatever the hell it is you do the rest of the year. I really wish you the best and hope you have a rich, wonderful future; I just can’t be a part of it.

Now go, and let me go. You know what they say- if you love something set it free. In like a lion, out like a llama. Or something. Just go already, before I have to change my number and get a restraining order.

What a great start to my day. Your post made me laugh out loud!

Front Range winters are like crazy stalker ex-boyfriends... I was riding beautiful dirt not too long ago but then we got 18" of heavy wet cement (snow). Oh well - at least the fire danger will be less. The sheriff enacted a fire ban about 2 wks ago - usually that happens in July. So, I should be cheering for snow...

Great post and perfectly in line with my thinking as this storm now has my part of the world in its sights.

I had no idea that you could get a restraining order to keep the weather away but I will be leaving for the courthouse shortly as I am past the point of asking winter to leave.

Watcher, well done. I crawled through last week with only one hopefully thought "this is Winter's last blast". I don't know what will keep me going this week.

WheelDancer, add me to the class-action restraining order.

We got ripped off by winter and, thankfully, spring has a conscience and is doing all she can to right the previous wrongs.

However, I must admit to being tired because of the snow. Note that I didn't say I'm tired of the snow. I wish I had the legs to ski everyday but sadly I don't and it pains me to think that at least 1-2 powder days will go by untouched this week.

What we need is a restraining order on spring until winter has fulfilled her responsibilities!

This might, just maybe, keep me from opening my veins as I shovel my frigging driveway. Nicely written.

// it's next to the normal driveway, if you were wondering.

GAWD, just make it be gone! Crazy-Stalker-Ex indeed...if it keeps coming back I'll have it by the neck....

Ha! That's funny, I had a similar post, but from the opposite perspective (and not as well written):

Now, should I go snowboarding or CX skiing today? Hmmm...