Over the last several days, I’ve been thinking about angles, specifically 2 angles. The first angle is 109.5 degrees, and the second is somewhere around 45 degrees. I want to explain both, but suspect it may take 2 posts to do so. And here’s the deal: Saturday morning I fly to Europe for almost 2 weeks, for work and then a few days vacation with Awesome Wife. So I’ll post about the 109.5 degrees today, and may end up blogging about 45 degrees on the plane.

A Bit About Comments

But first, a comment on a comment. I rarely get comments on this blog, and I suspect that’s for 1 of 3 reasons.

1) People are shy. They don’t see a lot of other comments, and also maybe are afraid of not looking smart and of me coming back all kind of snotty and science know-it-all. (kind of like I was when I did that post about rainbows for Matt.)

2) People just aren’t very interested in the stuff I blog about.

So when I get a comment, I notice it. A couple days ago my coworker Kristin posted a comment asking about why the recent snowfall was lingering longer on the recently-burnt lower slopes of Lone Peak. My first reaction was, “Hey, this isn’t like a call-in radio show, where I just take random questions…” But then I thought: I go to all this effort and research to do this blog, and pretty much no one ever reads it, so if I actually have a reader who’s engaged and interested and constructively comments, maybe I should get off my high horse and try and answer her question.

Everybody knows that every molecule of water has 2 Hydrogen and 1 Oxygen atoms. And everybody knows that when it gets cold, water freezes. (Of course, I thought everybody knew how a rainbow works, so what do I know? There I go again, getting all kind of snotty…) But what not everybody knows is that when water molecules freeze, they get locked into a 3-dimensional hexagonal lattice. They freeze up this way because of the angles between the atoms in crystalline form. (Explaining exactly how this works at a molecular level is a little complicated- see here for details and graphics.) In the lattice, the corner positions of every individual hexagon are occupied by Oxygen atoms, and the Hydrogen atoms comprise the sides. And the effective angle between every Oxygen atom and the next-closest Oxygen atom is…. you got it- 109.5 degrees.

Why does this matter? Because this really wide angle creates a lattice with a ton of empty space in the middle of the hexagons. And that means that water in a frozen state takes up more space than water in a liquid state. Water’s pretty much the only thing you’ll ever come across that’s more voluminous in a frozen than liquid state. This characteristic of water is the thing that makes ice cubes float in your cocktail, snow deep and fluffy, and freezing deadly to living things.

A Bit About Snow

Saturday night it snowed about 3” at my house (pic of back yard, left). Snowflakes consist of layer upon layer of hexagonal lattice-work, which is why they generally display a hexagonal symmetry. Snowflakes form in cold clouds, and grow in size as additional water droplets freeze onto the growing flake. But for the flake to form, a minimum of 6 water molecules need to get into just the right configuration and hold it for a bit, and for that to happen in the middle of a cloud, it needs to be a lot colder than just freezing; it needs to be more like -30F.

But snowflakes routinely form in clouds much warmer than 30 below, and the reason is that snowflakes typically start developing around some particle of nucleating material, typically (but not always) dust. Below 32F, water molecules freeze onto the dust particle, and additional water molecules freeze onto the developing lattice. So at the heart of every clean, white snowflake is a teensy little bit of air pollution.

Down on the ground, ice forms the same way. In puddles, ponds and ice cube trays, water molecules first get locked into the lattice at the edges, and on top- the coldest places (cold air, ground or plastic) and the ice grows from there, which causes the hollow-water-filled cubes you get in ice cube trays if you don’t leave them in the freezer long enough.

Early season snowstorms are especially damaging because plants aren’t ready for them. In the Fall plants prepare for winter so that the heavy snows and low temps don’t kill them. Some of the preparations – like dropping leaves- are pretty obvious. But inside a tree, at the cellular level, all kinds of changes are going on to prepare it for freezing temperatures, in a process that is wonderfully analogous to the preparation of brown fat in mammals we looked at last month.

The reason freezing destroys living tissue is the expansion of water inside the cell. Frozen water expands 9% in volume, and this expansion injures cells in 2 ways: first, by rupturing the cell membranes, and second, but messing up the permeability of those membranes. With the membranes screwed up, the cells die, which is why frostbite in humans so often leads to the permanent loss of fingers and toes.

Plant cells are just as vulnerable to this type of freezing damage as we are, but unlike us, they can’t start a fire or put on a coat or go to the mall. So cold-tolerant plants have evolved 2 tricks, which work in tandem with one another. First, they produce sap and compounds within the cell that act as a partial antifreeze analogous to glycerol in snowflies, which we saw back in the Spring. And second, they concentrate those compounds inside the cell walls, so that when ice crystals do form, the form in between the cells, in what are called the intercellular spaces. 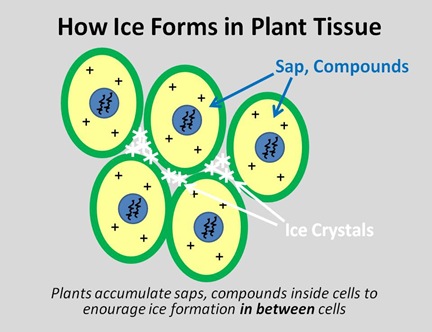 Just as an ice cube grows in a tray, water molecules freeze onto already-frozen molecules, and if water in between the cells can be persuaded to freeze first, then that’s where the ice will grow. As ice grows in the intercellular spaces, additional water molecules cross the cell membrane to join then, which in turn increases the concentration of other compounds- and the antifreeze effects- within the cell.

This process protects plants down to about -40F. Below that temp, super cold-tolerant plants undergo a supercooling formation of non-crystalline ice inside the cell membrane, but we don’t get temps that low much here in the Wasatch.

The opposite of freezing is of course melting, and that leads us to Kristin’s question, which was:

As I was running errands yesterday I noticed that the snow seemed to cling to the burned area more than where there were live trees. It seems that today the snow has stayed in that burned area but it's melted in the other areas. Is this all in my head? or is there something scientific going on?

Tangent: The only “errands” I can think of worth doing down in Draper would be looking for hybrid oaks or shopping for a monster trophy-home, but I guess that’s NOMB.

So first of all, there’s always something scientific going on! But I have to admit that this one bothered me a bit. There’s no easy answer on the web, and usually snow this time of year- when the ground is still relatively warm- sticks to vegetation before it sticks to the ground, because the leaves of the grass, sagebrush and oak would cool down faster than the ground itself.

But after noodling on it, I’ve decided that it’s probably because of the depth of the snow- more than an inch or 2, but no more than say 6 or 8 inches- and the fact that ice and snow always melt from the edges.

If you take an ice cube out if the freezer and put it on the counter, it obviously melts from the edges. (Yes, I actually took a photo of an ice cube melting for this post. Like just in case a reader had never seen that before…) The ice that’s say 5 mm inside the cube doesn’t start to melt until the cube has melted down/in 5mm. And snow banks melt the same way; a big snow bank doesn’t start melting from the inside and collapse- it starts melting from the edges, where it’s exposed to the temperature differential caused by the sun and warmer air.

When the snow fell on the lower slopes of Lone Peak Saturday night, it was heavy enough that it just didn’t melt off immediately on contact with the ground. And once an initial covering was in place, additional snow accumulated consistently, with no “edges” except for the top of the snow. 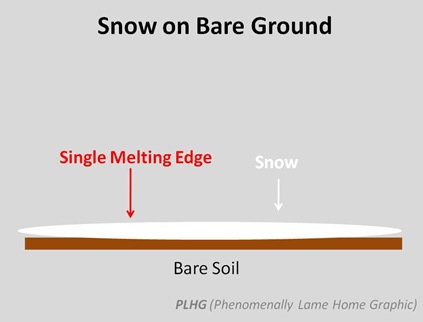 But on the vegetated portion of the slope it accumulated a bit on the ground, a bit on blades of grass and sagebrush and rabbitbrush twigs, and a bit on oak leaves. The snowfall wasn’t enough to create a solid blanket overlaying all/most of this vegetation, and so the “blanket” as it were was porous, with gazillions of little edges- the sides of blades of grass, leaves, twigs, branches, etc. 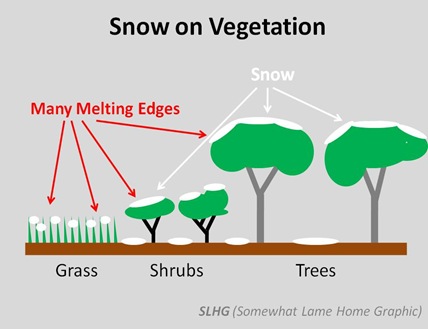 And in the days since, these edges have created countless penetration and melting points for the warmer air and sunlight to do its thing. On the burned slope by contrast, the largely “edge-less”, consistent blanket of snow has held up better, conserving its colder temperature, and being more slowly melted away, both from the top of the snow and now from the edges of the receding snowline.

If the snow had been a bit lighter, it wouldn’t have stuck to the open ground; somewhat heavier, and it would’ve created a less-porous blanket on the vegetated slopes, lessening the difference in melting rates.

Anyway, that’s my best guess. If you have a better one, COMMENT.

Woohoo! I honestly expected you to ignore my last comment and make fun of me later for such a silly question. Super interesting explanation! Thanks!!

First, I must apologize for the discrepancy between this comment and the date of the post. I have just discovered your blog via Fatty, and I am chewing through all the old posts.

Now, I can give you my reasoning for the unequal snow melt:
Burnt trees are dead. They are no more, have ceased to be, and what remains are the various carbon and nitrogen molecules which refuse to burn as easily. The living trees on the other hand, live, and therefore undergo the cellular processes of any living thing. These processes involve a chemical vital to all forms of life, adenozine-triphosphate, or ATP. ATP's only function is to be broken down so another reaction can use the energy stored in the strong phosphorous bonds. (ATP breaks in two, adenozine-diphosphate (ADP) plus a single phosphorous atom. The reaction powers every action inside every cell.) Anyway, photosynthesis is an exergonic reaction, meaning it produces more heat than it receives.

So there you have it. I think the reason there is more melt is because the heat produced by living plant cells is enough to cause the surrounding snow to melt.

Lilbikerelf: Ah, interesting, and a good possible explanation I hadn't considered. I'd have to look into some actual numbers (joules) to be convinced though. I'm skeptical that the ATP-generated heat on a leaf surface would be anywhere near the obvious and intense heat produced by the direct sun, if only because the sunlight feels so obviously warmer than a leaf. I guess one "test" might be to examine green, snow-covered leaves following an early-season storm and see if the melting is occurring against the leaf itself... anyway, good thinking and thanks for the suggestion!