For the last 4 days I’ve been in the thick of my company’s European conference. When I’m at the conference, my work-day runs from about 7:45AM to ~11PM, between meetings and sessions here and phone calls/emails back to North America in the evening. This leads to days where if I don’t watch it, I can end up spending 24+ hours inside the same building. This doesn’t work well for outdoorhead/tree geeks. So to preserve my sanity and (pretend to) maintain some base level of fitness, I run early in the morning, typically in the dark.

Tangent: My first morning I ran at Moon-Noon, which with the waning moon, was just before dawn. Prague is at latitude 50 degrees North, and so the 1/2 moon was way up around 60 degrees in the sky- very cool. 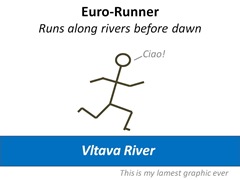 I used to run a lot, but over the last few years as I’ve ramped up the biking I’ve backed way off on the running, now doing the latter when either a) there’s too much snow/ice on the ground to bike, or b) I’m traveling. And because I’ve traveled so much over the US and Europe over the last decade, I’ve run through an amazing number of cities, usually early in the morning, which means I’ve seen the trash picked up in about 25 times as many countries as Sarah Palin has visited. Listing the US and Canadian cities I’ve run in would be a long (and not terribly interesting) list, but foreign cities include London, Paris, Rome, Barcelona, Seville, Toledo, Granada, Bilbao, Monaco, Zurich, Florence, Venice, Munich, Dusseldorf, Tokyo, Limmasol, Gothenburg, Amsterdam… and now Prague.

In so many of these cities, I end up running along rivers- the Thames, the Seine, the Arno, the Isen, the Nervion. And the reason is that in many European cities the riverfronts are some of the few places where you can run for a while without a zillion street crossings, without checking a map every 5 blocks, and where you can get a bit of a view. As a result, in my European downtime, I think a lot about rivers. 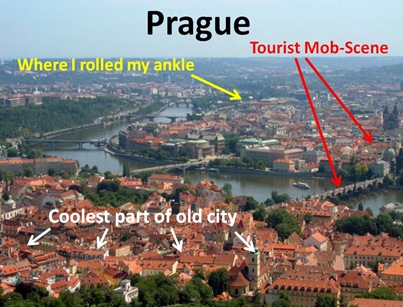 Hydrology always fascinates me, and the first that always grabs me about European rivers is the sheer volume of water. In Utah, and pretty much throughout the Intermountain West, there’s no such thing as a navigable river. And by “navigable” I mean as in a real boat or a barge, not a kayak running class X rapids. But in nearly every European city I visit, there’s a huge, deep, placid river smack in the middle. And when you’re not used to big rivers, they’re really freaky- big Interstate-highway-sized lines of water that bisect cities. How weird is that? 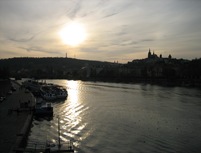 Sometimes, it’s almost ham-fistedly obvious, as with a glacier-fed river, such as Canada’s Athabasca. An eternal snowfield melts constantly, feeding the river. I get it. But think about the Thames. It’s huge- ships sail up it But there are no real mountains- much less glaciers in Southern England. Instead the Thames is ultimately the product of millions, billions of tiny seeps from the ground and misty raindrops drip-dropping off leaves and blades of grass. Each one is infinitely inconsequential, but together they make a mighty hydro-superhighway of phenomenal, quiet strength and power. Over centuries, even millennia, the river is unchanged, and yet it exists in its present form only in this instant, every bit of it somewhere else an instant later. 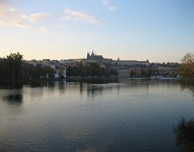 There’ something else we’ve looked at that’s like this, and interestingly, it’s also made of water: a rainbow. The refractive flash of the sun off the backside of each droplet is fleeting and transitory, but together they make a true, consistent and (momentarily) enduring arch of beauty. And I wonder if the beauty of rivers and rainbows is in some way the same beauty of foliage and children, the beauty of things that are only like the way they are right now.

Yesterday 3 things happened- 2 good, 1 bad. The conference wrapped up, Awesome Wife arrived in town, and, running before dawn, I rolled my ankle on a wet curb, and it’s now swollen up like a grapefruit. Guess I won’t be “river-running” for a bit. We’ll spend the next few days hobbling around Prague.

Housekeeping Note: I changed my font the last couple posts, due in part to whining from Matt, who said the old Arial font I was using was too much of an eye-chart. If you have an opinion on old font vs. new, comment.

Matt -- most modern browsers (IE, Firefox) allow you to override a web page's default font choices for your own viewing pleasure...

Woa. Phil is straightening Matt out. Phil and Matt are like the 2 smartest guys I know (like because they both work with computers) This is total Clash of the Titans!

Matt- watch out. Phil is my brother and snarky/sarcastic like me but way wicked smarter!

Yes, you can change the text size in your browser, but it then changes it for all web pages you view and can break the formatting of the web page (maybe Phil knows of a setting to change the font for only the specific page).

The font on Alex's blog was smaller than most sites used so I felt like it was difficult to browse through each blog post.

True, at least in IE. In Firefox, you can use the "No Squint" add-on to manage copy size on a per-site basis. See https://addons.mozilla.org/en-US/firefox/addon/2592.

But, getting my brother to change the font on his site is probably easier than installing additional software!