I Meet My Hero

Imagine you were really, really into American history. Later in life you became particularly interested in the origins of the Constitution and in… WAIT. STOP. Really, you need to go read those other posts first, and THEN come back and read this post. Because then this is a really great story. Otherwise it’s just kind of rambly and confusing (like most of my other posts…) OK, so anyway, yeah, like if you were way into American history and the Constitution and in doing so learned a lot about how the country was started, and some of the motivations and insights of the founding fathers.

Then imagine that one day, after you’d been way into this whole early-America-history-origins-of-the-Constitution thing for over a year, a friend called you up and said, “Hey, let’s get together Saturday and go see Thomas Jefferson.” And that somehow, Thomas Jefferson was still alive and, and you went over and saw him and got to spend the day talking about American history with him and getting to know him. You’d be thrilled, right? Now you know how I felt Saturday when I met Rudy Drobnick.

Drobnick of course is the guy who found the very first Northern Utah Gambel-turbinella Oak hybrid, Quercus gambelii x turbinella, 54 years ago on a hike in the Oquirrhs. And over the 4 years following, he scoured the foothills from Ogden to New Harmony, eventually locating 40 some-odd more such hybrids, a number of which I relocated last fall, armed with a xeroxed copy of his 50 year-old master’s thesis.

Professor Chuck called me earlier in the week and told me 2 things. First, that he’d heard from Drobnick, who’d shared with him that he’d found an additional hybrid many years ago up in St. Mary’s, near where I live. At the time it was on a lot that was being developed, and he’d told the builder about it and asked him not to take it out. Following Drobnick’s 40+ year-old directions, Chuck relocated the hybrid last week (and took me up there this weekend. Leaves pictured above, right) I won’t share the exact location (I only do that with the ones I find) but it’s in a front yard on St. Mary’s Circle.

Second, Drobnick had shared beta about another hybrid he’d found decades ago down in Dimple Dell. Chuck told Drobnick about my new hybrids up in Jeremy/Pinebrook, and they arranged to get together Saturday to show each other their hybrids. Chuck invited me along, and I jumped at the chance.

We met Drobnick at the Division of Natural Resources building in West Salt Lake. (Drobnick spent his career working for DNR, and still volunteers for them several days/month.) When we pulled up, Drobnick stepped out of his truck- a tall, thin septuagenarian with long white hair and a long Santa Claus beard. 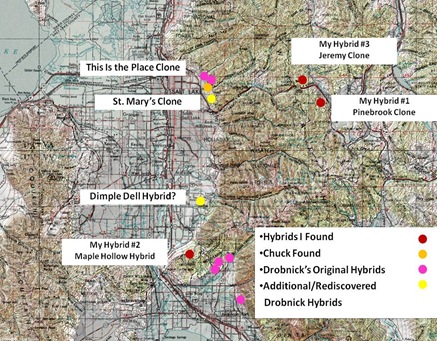 I didn’t realize till that moment what I’d expected- perhaps a somewhat misanthropic, slightly cranky old fellow, who shunned the company of others for long rambles in the foothills. But Drobnick (pictured below, left, along with Professor Chuck at the Pinebrook hybrid. Drobnick is the one on the right.) is nothing of the sort; he’s friendly, cheerful, enthusiastic and instantly likeable. His bright blue eyes somehow convey a boyishness and youthful energy that cut through his old-man beard and quaky voice. 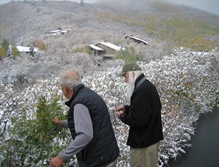 We drove up first to the Pinebrook Hybrid. As we drove up Parley’s Canyon in the light snow, Drobnick marveled delightedly- almost giddily- at how wonderful, incredible and unexpected it was that I’d found a hybrid at that altitude and location (East slope.) And as he did so, I’ll admit that my head swelled with just a little pride and a sense of completion and having come full circle over the last year. From stopping to pee at dawn and noticing a few funny leaves to meeting Professor Chuck to tracking down Drobnick’s 50 year-old thesis and chasing down his old hybrids, to reading and wondering of his searches, his adventures, his hundreds of solitary hikes in the Wasatch and Oquirrhs and Sheeprocks, to finally meeting him in the living flesh half a century later. This has been an amazing year.

After the Pinebrook hybrid we returned to the valley to search for the Dimple Dell hybrid. As we drove I chatted with Drobnick about his life and his work. He still volunteers for DNR, currently working on a series of underpasses to enable deer, moose and elk to safely cross Highway 6 between Spanish Fork and Price.

Tangent: Drobnick carries a lifetime’s worth of trivia about wildlife as well as flora, which he’s happy to share. Here’s a quick example: the kinds of underpasses for wildlife that DNR is working on up on Highway 6 are a piece of cake to set up for deer, but highly problematic for elk. Deer will apparently check out most any open path with little prompting. But elk are highly reticent to use any manmade path, bridge, tunnel or other piece of infrastructure. Elk most often travel through new territory in single file, following the lead cow. That’s right- they follow the lead cow, not the lead bull. Who knew? (OK well, Drobnick, obviously, but like who else?)

The Dimple Dell hybrid eluded us; we’ll need to return in a couple of weeks when the surround pure Gambel stands are bare to seek it out. But the best part of all this is that Chuck’s discovery of the hybrid a few years ago at This Is The Place seems to have reawakened Drobnick’s interest in hybrid Oaks after half a century, and over the last year or so he’s located several new hybrids on the West slope of the Oquirhhs. The 3 of us plan to head on over in early November to map and check them out. Looks like my hybrid Oak adventures are just beginning. How cool is that?