When To Back Down

I had another post planned for today, about red squirrels and fir cones and stuff on the trail, but I’ll hold off for a day to post this quickie.

My boss was in town this week. He works about 2,500 miles away, spends maybe 6-8 days a month in my office (which, when I think about it, is pretty sweet. I should quit whining about my job…) Late this morning we had a long, drag-down meeting where we disagreed on something. When we wrapped up, I stated my position, why I felt that way, and said something to the effect of: you’re the boss, we’ll do it your way, but this is why I think you’re wrong.

I was a bit wound up afterward, and decided to press my Happy Button- a long lunch/ride. I did the PBX loop (one last time before the weather pulls a “winterito” -little Spanglish for you there- on us this weekend, with snow/rain and highs in the low 40’s…) I was riding great, cleaning all the switchbacks, when I ran into this guy ½ way up “X Trail”. He was square on the trail, a switchback above me, and a cow was just 20 feet ahead of him. They/he (not sure) was making weird moaning/low-bugle-y noises, and it occurred to me that this is likely mating season.

Side Note: I mention a lot of trail locations in this blog. If you ever want directions to a place or thing mentioned here, you can either leave a comment or email me at adventurebotanist@yahoo.com. (Is that the best email address ever or what?)

So I did what I normally do, which is stop and start talking loudly, hoping he’ll move off. But this one didn’t. He was standing his ground, and right after I snapped these photos, he started bashing some brush and moving towards me. I got out of there fast, stopped ~100 yards down-trail (he didn’t chase) waited about 3-5 minutes, and climbed back up a couple more switchbacks. They’d moved up-trail a bit, but were stopped again. 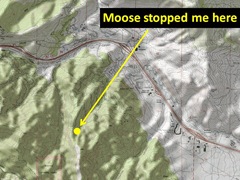 Tangent: What did I talk about? I told the moose that a) I wasn’t a threat, b) I wasn’t competing for his mate, and c) he really should regard me highly, as I was a big-time nature-blogger who’d done a 2-part series on moose earlier in the year, and in fact I was likely the only mtn biker he’d ever run into who knew both his subspecies (shirasi) and number of chromosomes (68.) I conveyed this in a mixture of English and Spanish. I often speak in Spanish when addressing animals because a) any Anglos around probably won’t understand and b) it’s nice to practice with an audience that can’t criticize my horrific Spanish grammar. He seemed unimpressed with all of my arguments, por ambas idiomas…

I’ve never backed off from a moose (OK except when they are actually chasing me) and in fact I often make fun of Organic-Chemistry-Rick (guy who refuses to read my blog) because he regularly 180s and changes his ride-plan when encountering them. (Rick is also afraid of dogs, which I used to tease him about incessantly, until one -a weimereimer- bit me last year (how’s that for karma?), also in Pinebrook- I swear it is like a wild-animal safari up there!)

So I spent a moment thinking about life, how I’d kind of pushed it a bit with my boss, how I’d been a bit aggressive about things in general lately, how I’m in my 40’s with 3 kids to put through college, and that this might not be a bad time to back down. So I did, pulling a re-route and getting back to the office a bit later than planned.

Tangent: 10 years ago yesterday was my only car/bike accident. 9 years ago today I was saved from a 40 foot fall off a cliff by a Cliffrose (not Bitterbrush- I was mistaken.) Both these anniversaries crossed my mind as Alces alces shirasi and I stared each other down.

When I returned to the office my boss was looking for me (why does that only happen when I sneak out for a ride?) and wanted to talk. He’d thought about our meeting, and had decided I was probably right. He backed down.

There’s some lesson in here somewhere. Just haven’t figured it out yet.