Euro-Post #2: Two Things About Me, More Euro-Hydrology, And Changing Larches

Here are 2 interesting things about me. And don’t worry, only one of them involves bragging.

Tangent: I keep seeing this thing on people’s blogs that says they got sent some chain-email that says they have to write 7 (10? 12? I can’t remember) interesting things about themselves, and then they go on about how they were born with an extra appendix or once peed next to John Denver in the men’s room of the Kansas City Marriott. But that’s not what happened with me. These are just two seriously interesting things that I’ve known about for a while, but was just reminded of again in the last couple of days.

So here’s the first thing: I heal really quickly. Seriously. After my last post about rolling my ankle, it swelled up way, way bigger than normal. And even though the swelling’s gone now you can see some of the residual bruising in this photo. The day after, Friday, I was hobbling around Prague like a cripple. The next day I felt pretty decent, and yesterday- are you ready?- I ran 3 miles, pain-free. For a mid-forties guy who’s drunk enough Czech beer in the last week to kill a small pony, I think that’s pretty impressive.

The second thing is this: Wherever I go- and I mean like wherever, like other countries where nobody looks like me- people ask me for directions. Really, this is true (and Awesome Wife confirms it.) First off, I travel all the time in the US for work, and people always stop and ask me for directions. But people also regularly stop and ask me for directions in other countries, including: France, England, Spain, Italy, Cyprus, Canada, Mexico, Cuba, Netherlands, Monaco and now the Czech Republic. Now admittedly, in a few of these countries I look somewhat like a native, namely in Spain and Cyprus (I was going to include Italy, but I dress way too shabbily to pass for an Italian.) But in no way do I look Slavic or Latino, and what’s more, even when it’s obvious I’m a foreigner, people keep pressing me for directions! Here’s a typical example from last night, in downtown Prague:

WOMAN: Can you tell me please where ees “Abel Coffee House”?

ME: You know, I’m actually not from around here. But I’m sure you could pop your head in the restaurant up there and ask them if they know where it is…

WOMAN: But look at map, I think ees here, no?

Seriously, you’d think after I opened my mouth, they’d say to themselves: Oh OK, this guy’s a clueless foreigner like me, I’ll move on and ask one of the 2 or 3 million people who actually live in this place… But no, they carry on, somehow under the impression that if they press me just a bit harder I’ll suddenly break down and reveal a hidden wealth of native-inhabitant knowledge that I’ve been somehow holding back under a finely-practiced veneer of Clueless American Tourist.

I can only think of 2 plausible explanations, one only remotely plausible, and the other totally, completely and ridiculously implausible, but way, way cool.

OK, so the first possible explanation is that people sense in me a willingness to help. And in all fairness, I am a reasonably helpful guy. Today for example I actually did give directions to a group of lost Irish tourists in Prague’s Jewish Quarter, and in a restaurant this evening I helped translate for a Spanish couple. So maybe I give out some subconscious, “Ask me, I’m happy to help!” vibe without knowing it (which would be ironic because in most situations- shopping, traveling, in a meeting at work- I’m hoping nobody asks me anything.)

The other, way far out, possible explanation is this: I have a phenomenal sense of direction, and at some subconscious level, people can sense this about me.

OK, I know this sounds totally wacky-tobacky, but the first part is true. I have an amazing sense of direction. I almost never get lost. (OK so I guess both of these things involve me bragging.) I’m particularly good in the backcountry, but I’m even pretty darn good in strange cities. I probably just have good mental-spatial skills, but maybe there’s more.

Today Awesome Wife and I took a boat ride today on the Vltava, which was lots of fun. One the way we passed a bunch of ducks and swans (and these birds, which I couldn’t identify.) And it was pretty cold, which made me think about how these birds are going to migrate South pretty soon.

Bird migration is an amazing thing, both from a physiological and an evolutionary perspective, but the thing about long-distance migration that’s most amazing is navigation. Ornithologists have spent lifetimes trying to understand how migrating birds navigate, and it’s not 100% clear, but here’s an interesting thing that’s come out of that research: it appears that many birds are able to navigate using the Earth’s magnetic field. Evidence includes successful migration by birds that can’t see, as well as experiments attaching magnets to the backs of pigeons, who are then completely unable to navigate. 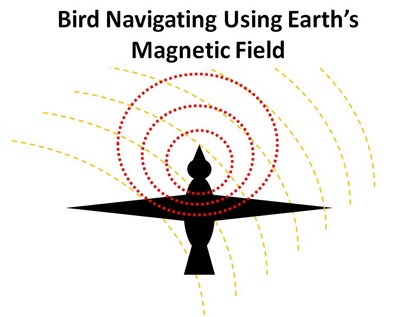 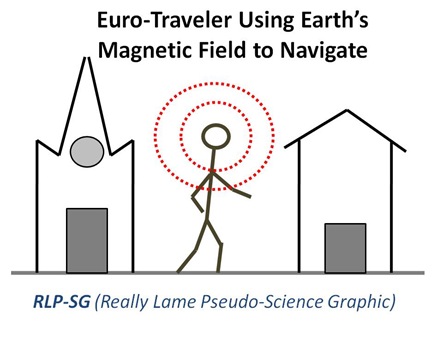 OK, this last “theory” is way dumb. But seriously, people are like always asking me for directions.

So let’s get back to something a little more grounded in reality: Hydrology. 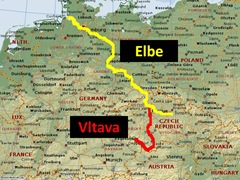 The Vltava winds its way North up to Melnik, CZ, where it joins the Elbe before crossing into Germany, traversing that country, passing through Dresden and Hamburg before dumping out in the North Sea. But here’s the thing; when the Vltava meets up with the Elbe, it’s actually bigger than the Elbe at that point, so it’s not really a tributary so much as it is the Elbe. In Europe rivers are extra fascinating because they so often cross or divide multiple countries and languages. 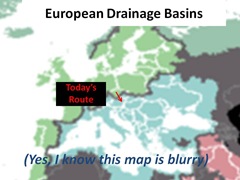 I’m typing this on a train from Prague to Vienna. Sometime in the next hour, as we approach the Czech city of Brno, we’ll cross the European continental divide. Where we are now, all water eventually drains into the Atlantic/North Sea/Baltic. From Brno on South, all water eventually drains into the Mediterranean. The specific basin we’re entering, the Danube, is particularly interesting. The Danube is the longest river in Europe, originating in the Alps near Basel, Switzerland, swinging up into Bavaria North of Munich, then passing through Vienna, Budapest then Croatia, Serbia, Romania, Bulgaria, Moldova and Ukraine before dumping out into the Black Sea, which in to drains into the Mediterranean through the Bosporus in Turkey. That is a ton of countries and languages. Just like back home, road trips always are way more interesting when you know the hydrology. 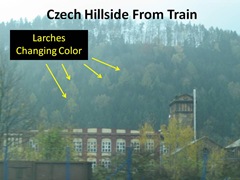 The train’s passed out of the rolling plains and is climbing between wooded hills covered with some type of PLT. I don’t know European trees well, but even from here I can recognize Spruce and Larch. I’ve never seen Larch in the Fall before; the needles are a beautiful gold, getting ready to drop.

So one other cool thing happened today. Awesome Wife and I love traveling in Europe, but we’ve learned to tolerate the micro-sized hotel rooms. It’s like a law of Euro-Physics that no matter how large the room appears on the website, it’ll be tiny when we get there. This afternoon we arrived in Vienna and completely shattered the law- this room is huge! And reasonable! Wow!

I came to your blog via Fat Cyclist (as I'm sure lots of people will). You write wonderfully about nature and I look forward to reading through your archives.

Your unidentified birds are (I think, though I'm really no expert) are some form of coot (http://www.rspb.org.uk/wildlife/birdguide/name/c/coot/index.asp). As for the lack of water in European toilets - just call us eco-friendly!

Thanks so much for stopping by and for the kind words. And thanks for the "coot" suggestion. My 9 yr-old (aka The Bird Whisperer) and I poked around a bit online and we now think it is the Eurasian Coot, Fulica atra. He thinks he mave seen its American cousin, F. americana, at the Bear River Refuge, just 50 miles North of here. Thanks again for the lead!

I too found your blog via Fatty and now I'm hooked. I spent some time on the phone to my SO the other night relating the post about colour vision in women.

To the point of my comment! I remember hearing or reading something about research into people's awareness of the earth's magnetic field. The person conducting the study took his students into the woods, at night, to a place where there were no visible landmarks or other clues to their orientation and asked them to identify north. Although not enough of them pointed north to distress compass makers, far more pointed either north or south than east or west.

I'm another european by the way. I think you usually get bigger toilet bowls in the UK than on the continent.

Keep up the good work.

Hi Matt. I wonder if I heard of the same study. As I did that post, I kept feeling that the idea- half-baked though it was- might not be completely original. Thanks for checking out the blog- it's great to get some feedback from outside of the States.

You're right about the UK bowl sizes; I noticed it on my last trip to London (2007.) But don't get me started on that wacky no-electrical-outlets-in-the-loo thing!