Euro-Post #3: Three Things About Me & Airplanes 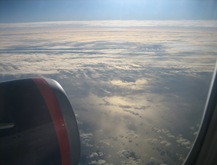 Flights home from Europe are long and boring. Every time I have one coming up I think about how I’ll use the down-time to think over various things I haven’t gotten around to thinking through, but what I usually end up thinking about is… air travel. So rather than fight it, here at 34,000 feet over the Atlantic, roughly 500 miles East of St. John’s Newfoundland, I’ve decided that rather than fight it, I’ll blog about it.

The first thing about me and air travel is I don’t like it. No I’m not afraid of flying or anything (though perhaps I should be- see the Third Thing, below.) I just dislike it. I dislike sitting still, I dislike the lack of control I have over my travel time, delays, and arrival, I dislike the food, I dislike people reclining their seats, I dislike being treated like I’m being admitted to a maximum security prison- I even dislike chatterbox seatmates.

Tangent: I used to politely go along when I had chatty seatmates. Part of it was I didn’t want to be rude, but another part of it is that I work in sales, and salespeople are always telling stories of great leads or contacts they made on planes. But one day about three years(?) ago I thought about it for a while and realized that no “lead” I’d ever obtained from a flight-seatmate had ever panned out, after more than a decade of flying and selling, and I thought- that’s it. I’m done. I’m not “chatting” anymore. Now when I get a chatter next to me, I either bury my face in a book, start working on my laptop and pop in headphones, or if those approaches don’t work, just turn toward them with my nicest, sweetest smile, and say, “You know, I’m not a big chatter.”

I had unlimited time, I’d drive everywhere. Seriously. If I could take as long as I needed to get to any meeting or vacation spot or whatever, I would always drive. I mean it. I love road trips. I’d drive to Ottawa for a meeting. I’d drive to Boston to see my parents or Chicago to see my sister, or Zihuatenejo for vacation.

When I’m flying over the ocean, I wonder what I’d do with unlimited time. I’m fascinated by the endless expanse of water below. When I look down I realize that this is what most of the world looks like- blue and flat. I’m not sure I’d ever become a big-time yachtsman/sailor, sailing back and forth to my company’s conference every year even if I had unlimited time. So I guess in my ideal, unlimited-time life I’d still fly for overseas trips. But I wouldn’t chat. 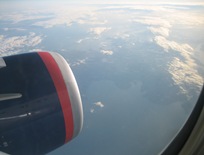 The second thing is that when I do fly, I like to look out the window. (Pic right = Newfoundland coastline) Hardly any other frequent fliers I know look out the window. But the way I see it, I love to spend all day or more climbing remote peaks for a view, and yet here I am, more than twice as high as I’ve ever climbed- I should at least look at the freaking window. 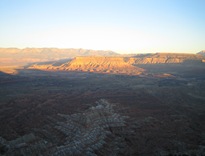 There are 2 times I most enjoy looking out the window. The first is when I’ve explored the route we’re flying over by car, bike and/or foot. For example when I fly to Phoenix or Las Vegas or San Francisco or San Diego, I know the geography well enough that I can follow the entire route in my head. (Denver’s trickier- the ranges are too closely packed together…) On the flight to Phoenix I get a wonderful view of Little Creek if I sit on the left side.

The other thing I enjoy about looking out the window is recognizing places I’ve previously seen only on maps. The ice-bound straits between Newfoundland and Labrador have been my favorite so far, but others include the English Channel, Lake Geneva, the Pyrenees, Corsica and Elba.

The third thing is that I survived a plane crash. (I referenced this event in a previous post, in the “Timeline of My Life” graphic.) It was in September 1997. My flight- a Frontier Airlines flight from Salt Lake to Denver had just taken off, when the pilot came on the intercom and said, “Carmen, could you please come to the cockpit?” A flight attendant unbuckled and entered the cockpit.

The pilot came on a moment later, announced that we’d had a hydraulic failure and were returning to the airport. That was the only information we got. The plane was quiet as we turned around and descended, and I think we were all thinking our own thoughts, but nobody cried or (visibly) prayed or showed any signs of panic. We landed smoothly, then rolled off the end of the runway- the hydraulic failure disabled the plane’s brakes. We finally rolled to a stop on the grass, and quickly evacuated out the inflatable slide. (Those slides work great. Just like in the diagram in the seatback card.) There were fire trucks and ambulances all round; they’d been ready for the worst. We milled around on the tarmac for a few surreal minutes, shaking the pilot’s hand and slapping him on the back, and everyone realizing we had another 30 or 50 years of living ahead of us.

Tangent: Following the crash I went for a mtn bike ride, and on the way home experienced the 2nd of the 3 bee-stings on the lower lip I mentioned in my beekeeping post. My lower jaw remained swollen for a couple of days, creating the misunderstanding that I’d been injured in the crash.

We’re over Newfoundland now. Mine is the only window open. (Everyone else is watching Movie #3.) The interior of Newfoundland looks like endless woods, hills and lakes. It looks magnificent. Almost home. I’m ready. I miss the Trifecta. I miss the Wasatch. I miss toilets with big bowls full of water.

Tangent: Seriously, what is with those Euro-toilets? They always have about a cup of water in the bowl which is nigh-impossible to bulls-eye with a falling turd, and therefore accounts for the brush beside every toilet. 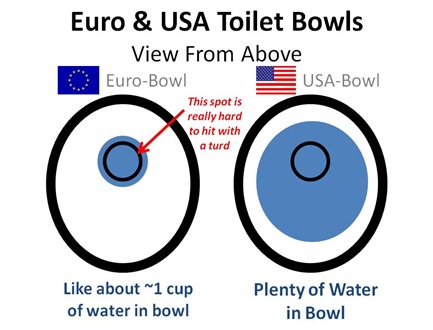 So I feel I should include at least some botanical nugget in order to save this post from being completely off-theme. Here it is. I’ve written a bunch about pines. The closest pines to me at home are the Austrian Pines in our yard. But I’ve never collected a cone from them for my collection because my rule is that I only collect from native habitat- or at least somewhere in its native range. Yesterday I encountered these Austrian Pines, in Austria! (specifically outside the Kuntehistoriches Museum.) Got my cone.