Fall Stage Two, and a Big Tangent On Raccoons I’m back home, and after 2 days, somewhat caught up at work and over jetlag. The weather’s been great while I’ve been away, which meant that yesterday I was able to mtn bike up at 8,000 ft, which is unusual for Nov 1. Fearing that it might be my last ride at altitude for a while, I did a favorite ride- the PBX loop in Pinebrook, with a cherry-stem out & back to the Canyons on Mid-Mountain, returning via Finesse trail.

This trip was my longest stretch of the year away from the Wasatch- 13 days- and it coincided with a double transition here: The wrap-up of Mountain Fall, and the onset of Valley Fall.

When I left we were definitely on the tail end of Fall in the mountains, but there were still plenty of colorful aspen stands left. Yesterday the hillsides were brown and bare, the only green in sight the North-facing stretches of PLT and scattered stands of Curlleaf Mountain Mahogany. Below are a couple of side-by-side shots, comparing a view yesterday with the same view roughly 4 weeks ago.

This is my 13th Fall in Utah; I should be used to this transition by now. But every year when I’m first fully exposed to the bare, brown leafless aspen forest it still comes as a bit of a shock.

Everything feels so quiet and bare and open and colorless. At the beginning of the Living Year, my eyes were accustomed to the brown, gray and white of the Winter Wasatch, and any flash of color seemed almost garishly dazzling. But now my eyes are long since accustomed to the colors of Summer and Fall, and the dull brown/gray of the forest just seems so dull, so lacking, so wrong.

Tangent: The Gambel Oak up around Pinebrook was of course brown and bare, with one exception- the Pinebrook Gambel-turbinella hybrid still has a few green leaves (pic right)hanging on, a legacy of its live oak ancestry.

As I zipped along Mid-Mountain, the North-facing PLT stretches felt comforting and familiar; they don’t look all that different from when I left, and feel sort of like home.

But then I’d blast out into the aspens again and feel that alien, exposed bareness. Despite my love of mountain biking and warm weather, it made me feel a pang for snow, if only to clothe the naked forest.

Way back in April I mentioned that the transitional seasons happen in 2 distinct stages here: once in the valley and once in the mountains, with the valley leading in Spring and the Mountains in the Fall. 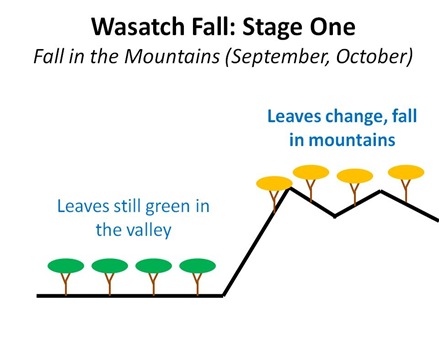 Most places aren’t like this; Spring and Fall happen the same way at the same time for a couple hundred miles in every direction. But here in Salt Lake the 2 stages are only 15 or 20 minutes apart. 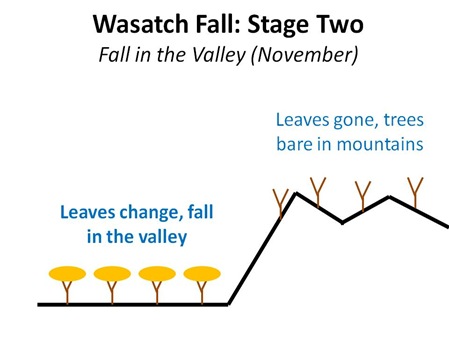 When I left it was still basically summer down at the house. The weather was a bit cooler, but the yard, the neighborhood, and the city were still green. Now most trees are yellow and many are already bare, and bags of leaves are appearing curbside.

Big Tangent About Suburbs And Raccoons

Tangent: Of course the “forest” as it were down here is the artificial woodland of temperate suburbia, which is largely the same across huge stretches of the US and Southern Canada. This temperate suburban woodland (TSW) now covers such an expansive area in our country that it should probably be considered its own forest type, in the manner of Rocky Mountain Montane or Sierra Montane or Eastern Deciduous Hardwood forest. The trees, weeds and grasses of TSW form a flora that is common to TSW across temperate America while largely alien to the surrounding environment. We’ve looked at several TSW plants this year, including Austrian Pine, Dandelions, Periwinkle, Crabgrass and Tulips. 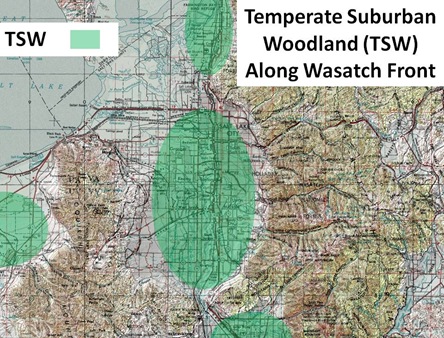 TSW also has a hydrology that is distinct from the surrounding environment: an artificial water table created and maintained by tens of thousands of sprinkler and irrigation systems. In addition to a distinctive common flora and hydrology, TSW supports its own trademark fauna. Certain birds and mammals thrive in TSW and are more common in this environment than anywhere else. We’ve already talked about how the growth of TSW in the Plains states may be altering the evolutionary courses of such birds as Grosbeaks, Jays and Buntings, but we haven’t talked about any TSW mammals. Here’s a great, quick example close to home: the raccoon.

The Raccoon, Procyon lotor, is one of the most commonly sighted wild suburban mammals in North America. Here in Utah they’re a common nuisance along the Wasatch Front, getting into garbage cans, building nests in chimneys, breaking into bird-feeders and indulging in other nocturnal suburban hijinx. But here’s something most Utahns today don’t know about raccoons; they only showed up in the 1970’s. That’s right, just 40 years ago, there’d never been a raccoon sighted in Utah, yet now they’re everywhere. What happened?

Nested Phylogenetic Tangent: P. lotor is not monotypic. There are 2 other raccoon species: T. cancrivorous in Central and South America, which is known for eating crabs, and T. insularis, which is endemic to the Tres Marias Islands in Mexico. In addition there used to be distinct local raccoon species in Cuba, Hispaniola (Haiti/Dominican Republic) and Jamaica, all three of which were hunted to extinction by European/African colonists in the 16th and 17th centuries.

Actually, the question should be “What is happening?” And what is happening is that for the last 120 or so years, raccoons have been expanding their range (map right) dramatically. In fact until the late 19th century, it appears they were only found in the Southeastern US. Then, aided by human settlement and TSW, they began their expansion, moving first North and later West. Today raccoons are found as far North and West as New Brunswick, Edmonton and Vancouver Island. Raccoons are a particularly fascinating TSW species because they’ve also adapted to many of the non-TSW/settled environments with which they’ve come in contact during the course of their diaspora, including the forests here in the Wasatch and across large parts of the Rockies.

Nested Raccoon Tangent: Raccoons have also expanded significantly outside of North America during the last century, with significant populations in Germany, Japan, Belarus and Azerbaijan having become established either via deliberate introductions or fortuitous escapes from fur-breeding farms. The story of raccoons in Germany is particularly fascinating, and though out-of-scope for this tangent, well-summarized on Wikipedia.

Anyway, the point is, TSW really is a fascinating ecosystem in its own right. I’ve flirted with it on and off here in this blog and will continue to do so, but I think it would be a great focus for a blog in and of itself. If ever end up moving to someplace like Omaha or Memphis, maybe I’ll think about it. (After the Bug Blog, that is…) 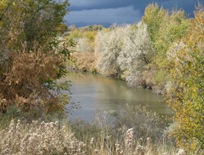 TSW Tangent: The obvious non-TSW forest-type down here in the valley is riparian zones. But although these occur within 100 yards of my house (Emigration Creek) they cover only a tiny fraction of the land area in the valley compared with the area characterized by TSW. Still, Fall is underway in the riparian zones as well. Here’s a shot of the Jordan River, where Twin A and I went biking this morning, and while we’re at it, what the heck- here’s an action video of Twin A mountain biking just off the Jordan River Parkway.

Anyway, what was I talking about? Oh right, Fall. This 2-stage Fall is really only accessible to people who live in places with a significant, and easily accessible, difference in altitude nearby, like Salt Lake or Denver or Boise or Reno maybe. It’s not something I was aware of before I moved out West, but now that I’m here I love it. It’s almost like being able to travel back and forth a month or more in time within the same day, just by driving up and down the canyon.

On a more mundane level, if the “shocker” of late Fall in the Mountains is the lack of color, the shocker of Fall down in the Valley is the lack of privacy. Suddenly we can see our neighbors again, and we realize that we’ve taken for granted the privacy afforded by the thick, rich foliage of summer. Oh well, time to stop walking around in my underwear.

Xtra bit of raccoon trivia. The German word for raccoon is "Waschbär" or washing bear.

OK Colin, 2 impressive things about this comment: 1st, that you speak German (when did that happen?) 2nd, that you figured out how to type an umlaut on a US keyboard. Oh, and you have a photoblog that shows you and Ayla boozing it up in New Orleans- who knew? Man, you never cease to amaze me...