A few weeks back, when it was still light enough to take a walk after dinner, the family and I took a big walk around the “block”. Along Sunnyside Avenue we passed the large home of a neighborhood family. The yard has a stone wall along the sidewalk, and immediately behind the wall are about a ½ dozen conifers.

As we passed the conifers I looked at the needles and was surprised to recognize them as Giant Sequoia. A couple of the trees bore the distinctive cones, and as both needles and cones look like nothing else, there was no doubt in my mind.

The terms “Sequoia” and “Redwood” get bandied about somewhat loosely and interchangeably, but there are 2 very different trees for which either or both of these words is sometimes used. The first is Coast Redwood, Sequoia sempervirens, which we visited and talked about with Awesome Wife back in June on our 10th anniversary trip to Mendocino. So far as I know, there are know Coast Redwoods living outside in Utah. S. sempervirens is native to mild-temperature, fog-bound coastal valleys of Northern California and extreme Oregon; Utah winters are far too severe for these trees to survive.

Tangent: I wonder though if properly watered, a Coast Redwood might survive in St. George. Although the summers are blast-furnace hot and dry compared to the North Coast, cultivated Coast Redwoods seem to get along just fine with enough water in many of California’s Central Valley towns (such as Reedley, CA, where my brother- let’s call him “Phil”- used to live.) A Fresno/Reedley summer is blazingly hot, with highs frequently over 110F.

Giant Sequoia, Sequoidendron giganteum, is a completely different tree. It can grow really, really big, is a conifer, has reddish bark, and otherwise looks nothing like a Coast Redwood.

I saw Giant Sequoias for the first time back in February, and the tree it most reminded me of, both in needle and bark, wasn’t a Redwood or a Pine or a Fir, but rather a Juniper.

Like Junipers, Giant Sequoias (can I just say “Sequoias”?) OK, Sequoias have scale-like needles pressed down against the twig (pic right), but unlike Junipers (or Incense Cedar) the needles flare out just a bit at the tips from the twig, making the twigs/needles sharp and a bit painful to grab firmly. The bark, which can be up to 2 feet thick, is papery and peeling, similar again in appearance to both Juniper and Incense Cedar. It’s also fire-resistant and contains tannins that help protect the tree against insect and fungi.

Tangent: When I visited, I collected a couple of of the cones lying on the snow. These cones were probably recently cut by Douglas Squirrels, Tamiasciurus douglasii, which we talked about last month when we were checking out stuff on the trails here in the Wasatch.

Unlike Coast Redwood, Sequoia handles a real winter just fine, and in fact is only native to the Sierra Nevada between 4,500 and 7,000 feet. And it’s only found on the West slope of the Sierras, and even there in only about 75 distinct groves. Its natural habitat covers only something like 36,000 acres, compared to somewhere around 2 million acres for Coast Redwood. By all evidence, this tree is a living relic, making its final stand on the West Slope. (And- assuming humans outlast it- could well end up like the Ginkgo, surviving only under, or as a result of, human cultivation.)

Tangent: The Northernmost grove, along the American River in Placer County, lies only ~40 miles from Lake Tahoe as the crow flies. I’d hoped to take the Trifecta there during our Tahoe vacation back in August, but the way the roads connect in that part of the Sierra, a visit would have entailed a 300 mile driving day, much of it on hairpin-twisty roads.

When you’re actually in a Sequoia forest, as I was back in February with “Phil”, it’s hard to believe anything could harm such giants. The old-growth Sequoias make the nearby , healthy-sized Sugar Pines, Jeffrey Pines and White Firs- trees that would look like giants here in the Wasatch- appear to be scrappy little shrubs in comparison. But unless the world changes significantly- in some lucky, unexpected way for Sequoias- over the next few hundred millennia, it looks like S. giganteum is on its way out. And that makes the natural groves all the more wonderful and beautiful.

But Sierra winters are harsh, not unlike Wasatch winters, and as a result Sequoia can be and is cultivated here in the Salt Lake Valley. A couple weeks after my neighborhood “discovery” I finally officially met my neighbor (a very nice guy and a 3-time LOTOJA finisher to boot), and he confirmed that the trees in question are indeed Sequoia, which he’s planted since moving in over the last year or so. He’s had some challenges with them and has had to replant 2 of them. The problem for the young trees appears not to be the winter, but the Salt Lake summer sun, which desiccates the young needle shoots. Still they grow here, and the nursery from which he purchased the trees has guaranteed to make them survive or replace them. 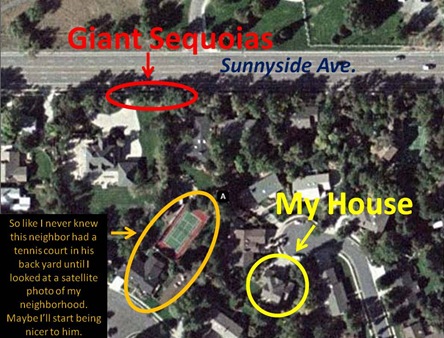 Tangent: My friend Cory actually had a Giant Sequoia, probably a 50-footer, growing in his back yard at his previous home in Olympus Cove. I regret that I never got around to more than a quick glance at it while he lived there.

I think it’s wonderful that my neighbor’s planted Sequoias, and I’ve encouraged everyone who’ll listen (realistically the Trifecta- because they have to- and Awesome Wife- because she indulges me) to check them out. Getting to Sequoia National Park or some other natural grove is bit of an undertaking for most of us, but anybody can swing by Sunnyside.

But what I really wonder about my neighbors’ Sequoias is this: how big will they get? Thousand –year-old Sequoias are often over 300 feet high, and they can reach close to that height in only a couple of centuries if conditions are right. Could my neighbor’s- let’s call him “Tom”- could Tom’s Sequoias get to be 300 feet high one day? Certainly if they grew anywhere near that size, he’d have to “cull” a few; they’re much too close together. But what if all but the 2 end-trees were culled, and homeowner after homeowner cared for them over the next few hundred years. What would they look like?

The tallest building in Salt Lake, the LDS Church office tower, is 420 feet high. In 500 years, Tom’s Sequoias could be ¾ that height. 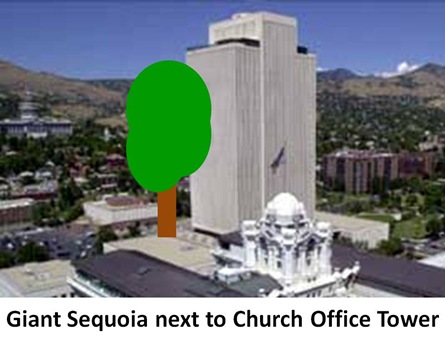 But Tom’s house sits up on the East Bench, 500 feet above downtown Salt lake. Tom’s trees would be the highest “structure” in the valley, visible for miles away and from incoming airliners. In the late afternoons, shortly before sunset, when my 500-year great-grandchild starts mtn-biking across the street from the zoo, and climbing up toward the top of the “Roller-Coaster”, he’d do probably ½ the climb in the shade of Tom’s Sequoias , about ½ mile off to the West/Southwest. They would be utterly fantastic. 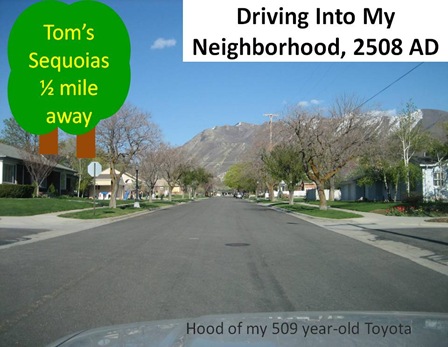 I hope Tom and the next 20 or so owners of Tom’s house take good care of those trees; my 20x great-grandchildren will love them. Right now they’re only about a dozen feet tall, but they’re still way cool. Go check them out at right around 2320E. Sunnyside Ave.

Side note: The tallest Sequoia of which I’m aware in Utah- but haven’t seen- is supposedly a 110-footer down in the Pine Valley Mountains, just North of St. George. I don’t know it’s age, but would be surprised if it’s over 80 or so.

I’ll be offline for a few days, away for a desert mtn-biking weekend with the guys to my favorite place in the world.

Interesting that there are sequoias in Salt Lake. I guess it's true you learn something new every day. Thanks!

Thanks for clarification. Altho a sometime botanist of sorts, I've always been confused about these two and never lived in range to really check it out. We saw one in, get this, upstate NY my last visit there, but it had real needles, so must have been a coastal redwood, eh? Hope it survives!

Yes, there is a sequoia tree in the area north of St. George. We hiked up to it with our grand kids yesterday. We have been there several other times. It's about 11 miles from the closed BLM gate round trip. The tree is located behind the Browse Area Guard Station at the base of the Pine Valley Mountains. The hike is beautiful and it's a nice place for a picnic. Take Browse exit and follow the dirt road toward the mountains.

Greetings, I want to find out if your images of the giant sequoias growing in Utah can be used on our giant sequoia nursery website gallery out of California. I was just told about the trees in St. George too. We run a gallery of GS trees from all over the world. www.giant-sequoia.com email me JUDY

Judy- sorry, just saw this 6 months later (didn't have auto-copy on in the old days.) Feel free to use any photo you like.

There are 3 giant sequoias in Layton on Gentile street about 2 or 3 blocks west of Fairfield street. Probably 60 or 70 feet tall. In Ogden on 26 th street 3 blocks east of Harrison blvd you'll find 3 incense cedars on the grounds of an elementary school. They must be 70 or 80 feet tall. I've been growing my own for about 13 years and it's about 25 feet tall.

Little America Hotel has several around it. There is also a grove of them one the south end of BYU's campus.

I've planted dozens of Coast Redwoods in northern Utah (Farmington) starting in 2018. A few froze, some died of other accidents or problems, (trampling, strangled by weeds, drought, vandalism, etc), but some have survived, and there are still a couple from 2018. They've made it through 3 winters so far. The largest is about 5 feet tall, and I planted it when it was under 3 feet. I have many more that have made it through one or two winters.

Turns out that they're hardy to around 0° F, sometimes lower, and recover from damage easily, especially as they grow larger. The trick is to plant them in the spring, and/or get specimens whose needles have hardened off. Our summer heat helps well with that. In addition, blue cultivars such as Steel Blue, Simpson Silver, Filoli, and Aptos Blue tend to handle the cold better. Steel Blue especially doesn't even discolor!

Hey Sam, great info- thanks for chiming in!

And heck no, not"rude" at all! Makes me smile that someone still finds something interesting here after all these years :^)