Quick Note About Another Post: I’m the guest-poster today over at Fat Cyclist. If you’re not familiar with Fat Cyclist, you really ought to check it out. Even if you’re not a cyclist, the writing and humor alone make it a great, regular read. In addition, Fatty’s blog is one of the very few out there that effectively bridges discussion between a fun, recreation-related topic and a real tough personal issue on the personal and family front, namely cancer. I actually work with Fatty. He’s at least, if not more, likeable and good-hearted in person as he comes across in his blog. And the thing is, he’s like not even fat.

Quick Note About THIS Post: Despite the somewhat risqué theme of this post, there’s really nothing in this one that should cause prudish concern. I usually avoid adult topics in the blog, but this analogy is so good I just had to make an exception. (And besides, only about 5 people read this blog anyway, and I think they’re all over 30… Except maybe Kristin. Hey Kristin: why don’t you skip this one and go read the post about Moss instead?)

So many of the things I blog about here, from hybrid oaks to moose to birds, I see on a mountain bike. And several times this year I’ve made references to mountain biking at night- which I will hereafter refer to as “night-riding”- and even hinted at doing a post about it from time to time. So now I’m doing it. 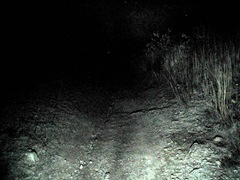 Night-riding is one of those things non-mountain bikers totally do not get. And what’s more, the vast majority of mountain bikers don’t seem to get it either. They may have tried a night-ride or two, or even participated in a 24-hour team event, but almost always seem to have quickly retreated to the light of day. Of the mountain bikers I know, fewer than 5% (way fewer, like maybe 1%) night-ride regularly. And this just amazes me, because night-riding is so utterly, unbelievably awesome.

But when I try to explain to other mountain bikers why night-riding is so great, I get blank, you-seem-weird looks in return. They just can’t seem to get mentally past the whole dark-and-cold thing. So for a while, I’ve desperately sought an analogy that could somehow impart the complete and utter coolness of night-riding. And finally I think I’ve found it: Night-Riding is like Hotel Sex. 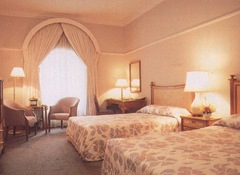 When you grow up and get married and have a baby or two, there comes a time when you and your spouse finally get away from the kid(s) for a night or a weekend. It may be for weekend away, or to go a wedding, or a reunion, and it may be anywhere from 6 months to a few years after the birth of your most recent child. And you leave your kid(s) with your family or friends or whatever, and you spend the night- just you and your spouse- in a hotel. And when that happens, and while at the hotel you and your spouse do you-know-what, even though it’s pretty much just like doing you-know-what back home, it’s like somehow totally, way different, better, newer and somehow feels a bit naughty. That’s Hotel Sex, and that feeling, that experience, is exactly the feeling and experience of night-riding: the same, but different. Somehow familiar, new and naughty all at the same time, like you’re somehow getting away with something. 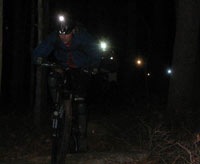 When my friends and I first began night-riding, during the winter of 1995/96, our lights were so lame and weak that we night-rode at a snail’s pace, riding as much by “trail-braille” as by vision. When we were fortunate enough to ride during a full moon, we killed the lights and rode by moonlight, which was easier and less disorienting. But over the years, as light technology and our willingness to invest in serious lights) has improved, we’ve amped it up to the point where we now night-ride at daytime speeds, and the thrill of descending a fast singletrack at 25+ mph in the dark is a fantastic high.

Tangent: My friend Rainbow-Spirit-Paul long ago pointed out the “arms-race” aspect of bike lights. When we began night-riding, we all had crappy lights and poked along slowly and happily. Then in 1996 or 1997, our friend Louis bought a “real” light- a 10 watt headlamp. Suddenly Louis was the alpha-male of our pack; every descent he dropped us like a bus full of old ladies on the way to Wendover. After a year or so, one by one, our masculinity was finally irked enough to start buying “real” lights, and the process has continued since. The most dramatic “escalation” of this race since was the 2004-2006 period, where most of us upgraded to HID lighting systems.

A couple of posts ago I mused over what it must be like to see the world through the eyes of a bird or other creature (or tetrachromatic woman.) In a way, night-riding is that experience; it’s the exact same world/trail, but the view is totally different. Colors are gone, dimensions are altered (see tangent below) and perspective is funneled to a cone running 40-50 feet ahead. The world around sinks back from the lighted cone-of-reality into an all-enveloping cocoon of inky darkness, which is at first un-nerving, but later becomes strangely soothing. Riding fast at night is to constantly and continuously emerge from darkness into light, like somehow being born again and again.

Tangent: One of the most initially disturbing aspects of riding fast at night is the strange perception of dimensions, and apparent “flatness” of the view ahead. This is at least partially mitigated by the use of 2 lights- a bright, flood-type light mounted on the handlebars, and a more focused “spot”-type light mounted on the helmet. The combination of the 2 helps soften the harshness of the light/shadow boundaries in the view-field ahead, and partially restore a 3-dimensional perspective to the rider.

On our Fall/Winter Gooseberry Mesa trips, the guys and I have started doing a night ride, after a short late-afternoon siesta, to make better use of the long dark evenings. This past trip Clean-Colin and I extended the night-ride on our own, along the Hurricane Rim trail. As we descended into China Wash we crossed the Mojave zone transition boundary, and the familiar smell of Creosote filled the dark around us. After we climbed the other side of the draw we realized we were ahead of our pick-up schedule and stopped, killed the lights, ate cookies and watched meteors for about 20 minutes (it was during the Leonid shower) before continuing.

Ultimately the most wonderful thing about night-riding is that it gives you back time. When you get down to it, the only thing we’re really given in life is time, and if your preferred way of spending time is out-of-doors, then the limited daylight of the winter months represents a huge loss of time and, therefore, loss of life. Night-riding gets you outside, doing something wonderful, in the dark. It recovers time, and in the end, recovered time = recovered life. If you want to extend your life, get a light, set your alarm, and get out.

Haha, way too funny! You are spot on though. At least about the hotel sex. I've never ridden at night. I subscribed to your feed.

First of all, if you do only have five blog readers, get ready for an explosion, because Fatty's sending a bunch your way.

Thanks for the great explanation of night riding. As a racer who is aspiring to more endurance events in the coming season, I'll admit to avoiding 12- and 24-hour races like the plague due to the whole "dark" issue, even though I've never been on a night ride. Your description has inspired me to give it a try. It may add some excitement to my cold, dark Michigan winter.

Great analogy, and I agree with your description of high riding. I tried it with an old light last year but it was a lot more fun with better lights this year. If cost is an issue, my current light system cost $65 - here are the details:

Very disturbing...will be having some discussion with "Awesome Wife" about hotel sex. I need enlightenment. Need to get the Man of the House out there in the dark to ride this winter, give us a call sometime.

I'm guessing this might be a bit lower on the naughty scale, but my favorite night-time rides are on December nights to see the Christmas lights in the 'hood.

Andrea: break on through! After you work out the initial kinks you will love night-riding, and a couple years from now you'll wonder how you made it through a Michigan winter without doing it.

KanyonKris: great post- super-useful for bikers who want to get into night-riding w/out laying out big$.

Cathy: Hey, Christmas lights are cool. Not quite Hotel-Sex-Cool, but still very cool.

Yo Jodie! I'm riding with the guys tomorrow night. Tell Randy to call or email me at work tomorrow to come out with us. I know he has a big-boy light now, so no excuses!

Wow - I'm one of the masses redirected from Fatty's site and I am amazed at the sheer unadulterated awesome of your blog. Seriously. I've been reading posts for an hour now and it's like getting a brain dump of local biology, history, optics... again I say, wow.

Thanks. This is quite a resource.

Yup, Fatty led me here also. Great Blog and your detailed descriptions
are perfect chum. I also used to ride at night when my kids were first born
to Steal Time. Now they are older and time is even harder to come by. So perhaps it is time to drag out my Nite Rider trailrat $89.00 Closeout from Pricepoint or Supergo
can't remember maybe even airbomb...
We had our annual Pumpkin Patch Night ride in Mianus River Park about a week before Halloween every year. There were many groups out there and you would see ball of lights in every direction way in the distance because the leaves were down already. Thanks for the reminder. I am heading to pricepoint to see what new Technology was arrived .
www.1cog.net

I'm very hurt that you only think that 5, thirty year old men use your blog. Thanks to Fatty it seems you have a huge upturn in readership.

This is a good analogy. I don't have kids, but it still works. Dood, the title of this post will rock the blog stats. If you want to know how and why this happens, ask Sid.

Kevin: Thanks. I put a fair amount of effort into this project and appreciate the praise.