The Advantage of Being a Pioneer 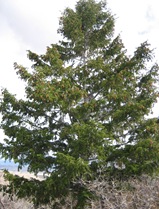 So there’s something else I noticed on Saturday’s PBX/Mid-Mountain ride: this tree. It’s a fairly unremarkable Douglas Fir, Pseudotsuga menziesii (which we looked at back in July as Wasatch PLT #1.) This particular tree isn’t very impressive; it stands alone around 7,300 feet on a hillside otherwise covered in Gambel Oak and Curlleaf Mountain Mahogany. It’s maybe 20 feet high, and I’d guess somewhere between 30 and 60 years old. I’ve passed it well over 100 times during the past 5 years. But this time something about it caught my attention caught my attention- it’s loaded with cones. (You need to click on the pic to see…)

What’s unusual about that is this is same area, Pinebrook, where I blogged about Red Squirrels and PLT cones, and the area called my attention to the relationship between the two specifically because the PLTs in Pinebrook have been so heavily worked over by the squirrels. Yet here’s this guy, with probably a few hundred untouched, well-developed cones.

Tangent: No I didn’t count the cones- I do have a life. But I’ve read that Douglas Firs often have over 600 cones, and this guy was loaded.

So why are this tree’s cones untouched? According to the numbers we reviewed in the Red Squirrel post, I’d guess that this tree’s seeds hold enough calories to provide ~10% of what a single squirrel needs to make it through the winter.

The answer has to be the tree’s relative isolation. This tree is an outlier on an otherwise PLT-free hillside. The nearest substantial clump of PLTs is about 1,300 feet to the Southeast, and the nearest extensive PLT forest is almost ½ mile away as the crow flies. 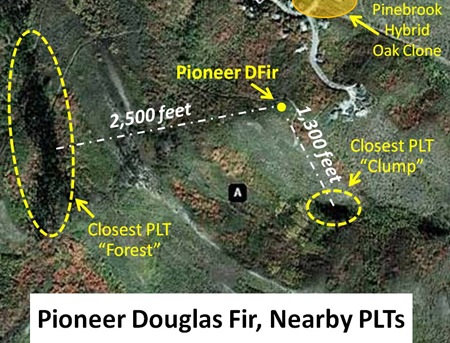 And neither of those PLT concentrations is line-of-sight. Probably a T. Red Squirrel can’t even see this Douglas Fir (if T. hudsonicus can even see a quarter mile away, which I have no idea…) and even if it could, it’s probably not worth the ¼ - ½ mile trek across hillsides bereft of tall PLTs where it’s probably more vulnerable to predators.

Side Note: How cool is this map? I usually do topo maps, but this time I used a satellite photo off of Yahoo Maps. On the zoom-in (below), you can even see the tree I’m talking about. I’ve even marked the trails so you can find it. Seriously, is this like the best blog ever or what?? 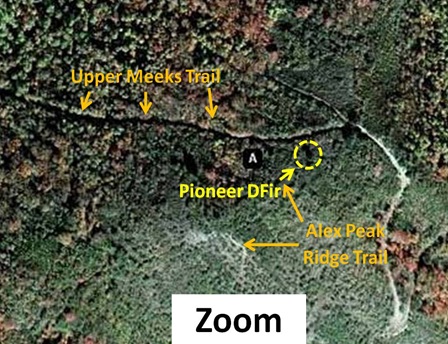 Sometime not too long ago- probably before I was born, but likely after the Second World War, a seed was blown ¼ mile+ or cached by a Stellers Jay or whatever, and by landing where it did it scored home run. Having co-evolved over millions of years together with squirrels, this guy now is growing, thriving and seeding squirrel-free.

Tangent: One wild card for this tree is the whole self-pollination issue. Since the closest “mate”/pollen-donor is ¼ mile away, does it suffer from excessive self-pollination and inbreeding depression (something we looked at back in July with Columbines…)? It turns out there’s a huge variance of self-fertility among P. menziesii; some are terrible self pollinators, and some are very effective. And interestingly, there appears to be no correlation between whether a given Douglas Fir tree is an effective self-pollinator and whether it’s an effective out-crossed pollinator. When inbreeding depression does occur, it usually manifests itself in lower seed production and/or slower seedling growth. On this tree, the cones are now wide open and the seeds mainly gone, but from what seeds are left and the imprints of now-dispersed seeds in the cone scales it appears that it’s producing plenty of seeds.

When a living thing pioneers a new environment and escapes its natural predators or other constraints, it can score big-time. Biology is full of large-scale examples, both from modern times, such as rabbits in Australia, as well as much earlier, such as the colonization of South America by cats following the Great American Interchange. We’ve even seen some examples closer to home in this blog: Tamarisk and Musk Thistle here in the American West.

Tangent: Here’s another one that I would’ve mentioned if I’d known about at the time I first blogged about it: Creosote. Back in May I went on and on about Creosote, but didn’t touch on one of its more interesting aspects- how it got here. Creosote’s closest relatives are way down in South America, and it didn’t exist anywhere in the Southwest before around 18,000 years ago. It appears that a seed most likely reached the present-day US via a long-distance migrator- possibly on the tail-feathers of a Plover. When it wound up in the then-warming and drying Southwest it hit a home run, and today dominates tens of thousands of miles of the Mojave and Sonoran deserts.

These big examples are cool to learn and think about, but I like this Douglas Fir up in Pinebrook because it’s that same “pioneer home run” effect on such an accessible, micro level. I plan to watch this tree for as long as I’m living and biking in the Wasatch, and keep an eye out for nearby seedlings in the years to come.