Cool Trees Around The Valley: Ginkgo

With Stage 2 Fall pretty well along in the valley, this would be a good time to point out a few interesting, non-native trees in the Salt Lake Valley. Every once in a while in my daily business in the valley, I stumble across something interesting.

Yesterday I attended a work-related meeting at a hotel in downtown Salt Lake, after which a bunch of us went out to dinner. Dinner was close to the hotel where my out-of-town colleagues were staying and after dinner we walked back together. As we were walking past the Delta Center (Yes, I know, but I can’t bear to say “Energy Solutions Center”; it seems such an awkward mouthful.) I absent-mindedly shuffled some scattered leaves on the sidewalk, and as I did so, I realized I recognized them- from a book. They were Ginkgo leaves.

All true seed-bearing plants- and all living trees (with the technical exception of the Tree Ferns, Cyatheales)- can be divided into two groups: Angiosperms and Gymnosperms. Most of the plants we’ve looked at this year have been angiosperms, or flowering plants practicing double fertilization, which makes sense as this group includes the vast majority of Utah’s- and the world’s- plant species. Most gymnosperms are conifers, and we’ve also spent a fair amount of time looking at a number of these, including several pines, the various Wasatch PLTs, and some of the interesting trees we visited this summer in California, including Coast Redwood and Incense Cedar. 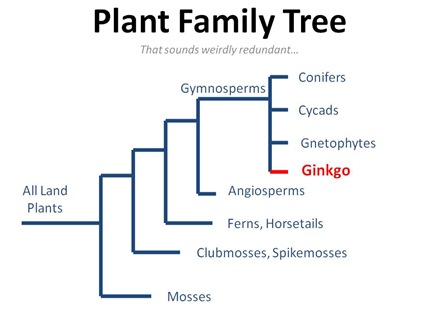 There are 4 major divisions of gymnosperms, each only distantly related to the others. The vast majority of living gymnosperms- over 600 species- are conifers, which include all of the examples I rattled off above. The second most numerous (species-wise) division is the cycads, which we saw briefly back in May down in Las Vegas way back during Monocot Week (Man, was that a great week or what?) The third division is the gnetophytes, which, while not very numerous, are well-represented here in Utah by Mormon Tea, which we talked about when backpacking in Twin Corrall Box Canyon.

Ginkgos are native to China, but cultivated around the world. They’re wonderfully resistant to pollution, disease and insects. Ginkgos are dioecious, and the males are usually favored for cultivation, as the females produce loads of smelly seed pods (pic right).

Though they appear to still be growing wild in a single province of Eastern China, it’s not clear whether the Ginkgos there are truly wild or just escapees from cultivation, in which case the Gingko may only now exist under, or as a result of, cultivation. The distinctive fan-shaped leaf of the Gingko is unique in the plant world and instantly recognizable from pictures by amateur wanna-be botanists. The veins in the leaves fan out, sometimes branch, but never reconnect. 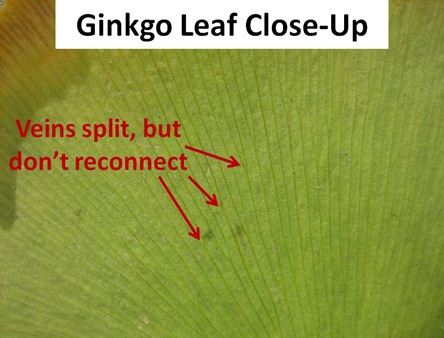 Fossils show that in the past there were lots of species of Ginkgo, stretching back at least 280 million years. But all are long-extinct, save G. biloba. Today, the ginkgo is separated by its nearest living relatives by roughly 300 million years or more- about as distantly-related to other trees time-wise as we are to turtles or birds. It’s alone in the world on a scale almost unimaginable, a tree out of time. To a tree-geek it’s almost like a tree from another world, or an alternate universe. 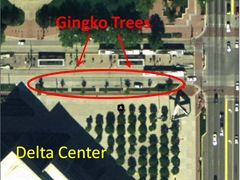 This morning I had to return to the hotel for another meeting, and following the meeting I made sure to detour for some photographs and to collect a few leaves.

Tangent: Last night when I stumbled across the trees it was right around Moon-noon, which last night was a bit after 9PM. Today when I returned- just more than halfway from the Equinox to the Solstice- it was almost Sun-noon, and the difference between the Moon’s height in the night sky (now peaking at over 60 degrees) and the Sun’s height in the day sky (now peaking at under 40 degrees) was dramatic and striking.

Gingkos are deciduous and these Delta Center Ginkgos are losing their leaves quickly. If you want to see them, get over there this week if you can; they’re on the North side of the building, along South Temple.

And gingkos. Any "primitive" plant-like thing is my thing, really.

Good job with the story. Where did you find the seeds and smelly fruits? Did one lonely female tree escape the male bias? (grin)

Me too! Cycads, Ginkgos, Ephedras- I love "evolutionary orphans." I'm going down South again this weekend where there's Mormon Tea all over, side-by-side with, but so amazingly different from, the sagebrush and blackbrush beside it.

So the seedpod pic is not mine- I found it on the web. (other pics were mine.) I found a list of the common cultivars, and they're almost all male. But I read in Colin Tudge's book, "Tree" that there are females growing in NYC's Central Park, from which he's seen locals gathering fruits. I plan to seek them out on my next work-trip to NYC!

Good luck with the seed quest. I'm told boys (who will, after all, be boys) used to collect seeds to put in the beds of other boys as a really nasty prank! Probably a camp thing...

But if you grow some, let me know! I've tried them here without much luck.

Ginkgo, "the fossil tree", is my all-time favorite tree, me being a geologist and all. I love it so much, I arranged for my husband and I to plant one during our wedding ceremony at Red Butte Garden. It is now, thankfully, still alive in our backyard. Thanks for writing about this great tree.

i live in western wv near huntingon and we have a 60 ft(at least) ginkgo tree in our front yard. we just noticed seed pods
(july 2009), we never noticed any blooms though.we've been here over 2yrs. and haven't seen these before. are these seed pods produced yearly or bi-yearly? what can you tell me about gathering and planting seed pods. i'd love to be able to start some. do the seeds have to be striated or have cold storage? thanks for any info. kat in wv