A Big Scramble, Another Hybrid Oak And A Dog

I’m down in St. George and was going to stay offline all weekend, but wanted to cover this while still fresh in my mind. 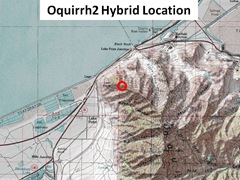 Wednesday afternoon (Thanksgiving Eve) after the business world shut down I headed on over to the Lakeview exit off I-80, at the North end of the Oquirrhs. (Non-Utah Readers: The Oquirrhs are the range on the West side of the Salt Lake Valley. Nice mountains, but largely ignored, due to their proximity to the much more impressive Wasatch Range on the East side of the valley.) Rudy located (and hiked to) a hybrid oak clone way up high on the ridge back in the 50’s (but didn’t include it in his thesis. Pic below right.) We wanted to get an accurate GPS location and sample leaves, and since it’s an almost 2,000 ft, steep, trail-less scramble up, and since I’m the only member of this hybrid-oak-hunting threesome under the age of 75, I felt somewhat obligated to scramble up there, and I wanted to squeeze it in before the incoming winter storm front made a mess out of the slope.

I have conflicted feelings about steep off-trail scrambles. On the plus side, they’re a great way to get to some of the coolest, most remote places anywhere in the Intermountain West. (See this post for a great example.) But on the other hand I do them so infrequently, that even though I’m generally in decent shape, I don’t use the “scrambling muscles” very often, which means that for the 3 or 4 days following I can barely hobble down a flight of stairs.

I’ve been hesitant to post exact locations for hybrids I didn’t find myself, and in one recent case removed a post that gave a fair amount of beta regarding a newly-found one down in Alpine. (My apologies to the UNPS oak-enthusiasts; I intend to re-post that entry when the land ownership and protection issues cool down a bit.) But this hybrid, which I’m calling “Oquirrh2”, is in no imminent (or really even conceivable) danger, and is in such a pain-in-the-ass location to access, that I have no qualms about posting its location. Below is satellite photo with actual hybrid clone visible in red circle. Just work your way as close to the RR tracks as possible, park, and knock yourself out. 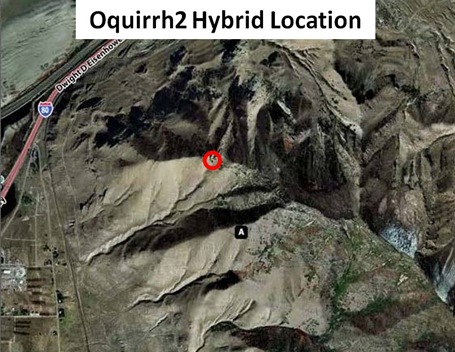 The hike, though tedious, is a good one, as it’s all on open mountainside, and passes two major Lake Bonneville shorelines very clearly. (If you don’t know about Lake Bonneville, which was like the Coolest Thing Ever, see this post.) After about 700 feet of climbing, you reach the Bonneville shoreline, which represents the level of the lake for the longest continuous period of its existence. 10-15 minutes later you climb past the equally well-defined Provo shoreline, which at 1,100 feet above the current level of the Great Salt Lake indicates the maximum depth of Lake Bonneville, and the level of the lake when Red Rock Pass finally gave way in a catastrophic flood. 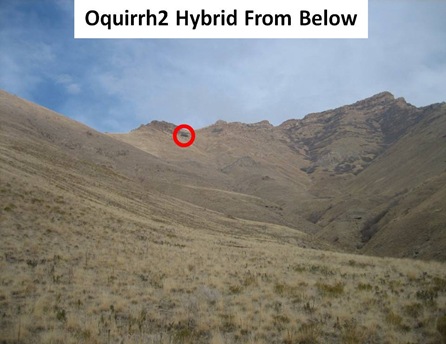 What was cool about this hike was that there was a fairly mean inversion going on, and its top coincided nicely with the Provo shoreline, which means if you look at the photo I snapped below, and imagine water in place of the visible fog/smog/gunk, you get a pretty good idea of what Lake Bonneville looked like around 16,000 years ago. 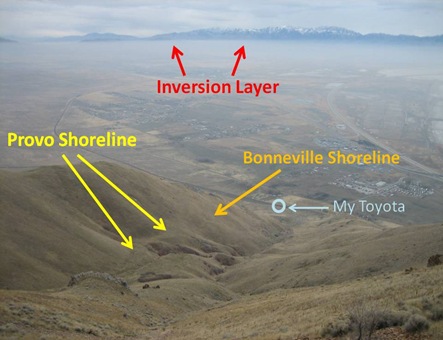 Tangent: Everybody living on the Wasatch Front hates inversions, and with good reason. But inversions actually have some really cool ramifications on plant life across the Great Basin, which I intend to do a post on this winter (probably during an unbelievably gross inversion.)

The Oquirrh2 hybrid is a bitch to get to, but worth it. It’s a nice-sized stand, maybe 20’ x 30’, with plenty of green foliage remaining at the end of November.

What’s particularly interesting is that the leaf morphology (fancy science word for “shape”) seems to vary significantly in different parts of the stand, and this suggests that it’s not a single clone, but multiple independent hybrids. (Pics left & right. This is just me going off here, so who knows. I sent a bunch of leaves over to Professor Chuck; we’ll see what he says.)

Going down was tedious. My ankle, which I rolled in Prague last month, gives me no trouble at all, except when hiking downhill. Go figure.

The Part About Dogs

But possibly the nicest part of this hike was that I had company, up and down. Not human company- this one was a bit much for PChuck and Rudy, and I can never talk any of my same-generation friends into these hare-brained scrambles to check out trees- but canine company. When I parked, this dog ran up from the nearby ranch house. Obviously friendly, he hung out while I got my stuff together, and then followed me as I set off. But amazingly, he followed me all the way up to the hybrid, repeatedly scouting ahead and returning, covering probably 2-3X the distance I did. At the hybrid we shared my water bottle, then he explored some more while I poked around and collected leaves. We hiked together all the way down, and then finally, when I pulled away, he chased my car down the road for between ½ and ¾ mile at 30+mph.

It was obvious this dog had a great time out with me. And it was also obvious- at the risk of tooting my own horn here- that this dog needs an owner like me. Someone who goes off on long, aimless adventures and rambles into the middle of nowhere, someone who love to be outside, to explore, to poke around behind and under things. And as I drove down the road back toward I-80, I had a crazy thought come into my head: that I should just turn around, drive back to the ranch house, knock at the door and explain that no offense, but it’s obvious that your dog wants to live with me, to go on adventures and road trips and climb mountains, so how about I take him home with me?

I didn’t do it of course. As I’ve mentioned previously, we’re a pet-free household, and part of the reason Awesome Wife puts up with my backcountry adventures, bike racing and wannabe-botanist hijnx is that I don’t do wacky unpredictable stuff like gamble away the kids’ 529 plans, invite old college roommates to live in our basement, or bring home random animals. But that dog has stuck in my head since, in part because he reminds me of Raleigh.

I’m fairly emotionally-neutral about dogs; I can take or leave them, and generally have little desire to possess, or “own” one. I never had a dog growing up, and the closest I’ve ever come since was a 4-month period in early 1995, when I dog-sat the dog- a golden retriever named “Raleigh”- of my then-friend- let’s call him “Tim”. This was way back when I lived in Colorado, before Awesome Wife, before Utah, before the Trifecta, in the period of my life I think of as “Life 1.0.” (This present, Utah-based life being Life 2.0.) Tim and his family were moving from Denver to Florida, and I watched Raleigh as a favor, to help make the move go more smoothly.

At first watching Raleigh was a bit of a chore; when I tried to take him along running, mtn biking or XC skiing, he sprinted for the first 30 minutes or so, then practically limped home. But over a couple of months 2 things gradually happened. First, Raleigh shaped up, to the level where he could comfortably canter along with me on a 15-20 mile mountain bike ride at 12-15 mph. And second, we got in tune with one another. We figured out how to ride a trail together such that we didn’t run into, or get in the way of, or outpace one another. This period, the final few months of Life 1.0, was a sort of sad, and a little bit lonely, time in my life and I was glad for the companionship of someone who so obviously loved the backcountry and outdoors in the same way I did. 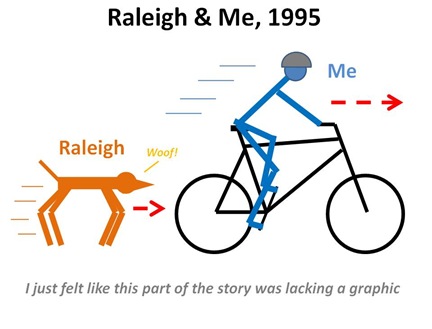 When Tim and his family were ready for me to send Raleigh on, I made a strong pitch to keep him. I pitched Tim’s wife first, pointing out how badly Raleigh needed open space, adventure and an active, out-of-doors “owner”. I talked about his thick golden coat, and speculated aloud on how terribly he’d suffer in the Miami heat. Even back then I was a great salesguy, and Tim’s wife crumbled quickly. But then Tim called me back, and he wasn’t budging. I tried charm, I tried FUD, I tried begging, but he wanted his dog back. So a few days later I drugged up Raleigh, put him in a cage, and shipped him to Miami.

About 2 months later, on a hot, humid Miami summer day, Tim’s wife was running with Raleigh when he collapsed. He was dead the day after.

The Raleigh episode still bugs me because it defies easy categorization. Generally, when we think about past events we’re sad about, we mentally file them into 1 of 2 categories. In the first category are things that turned out sad, but looking back, we wouldn’t have done anything differently. The second category is those things where we wish we’d done different, where we wish chose the second option, or taken the other path. When I look back at Life 1.0, all the events of that time fall into those 2 categories, with the exception of the Raleigh episode. 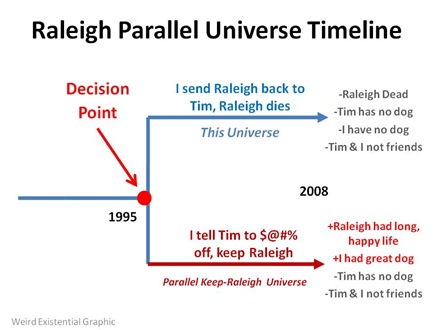 If I went back in time to June 1995, I’m still not sure what I’d do. If I’d told Tim “no forget it, I’m keeping him”, I’d be a lousy friend, a traitor and a dog-napper, all pretty scummy things to be. But over the years, Tim and I have long since fallen out of touch, and look at where we wound up: Raleigh’s dead. Tim didn’t get his dog, I didn’t get mine, and Tim and I aren’t really friends anymore. If I’d kept Raleigh, Tim still wouldn’t have had his dog, Tim and still I wouldn’t be friends anymore, but I would’ve gotten my dog, and more importantly, Raleigh would’ve had a another 7-9 years of life and adventure with me.

I know I’ve made a few snide and snotty comments about pets and especially the whole “owning” dogs thing in this blog this year. But what I’m really down on isn’t people having dogs; it’s couch-potato/non-adventurers having dogs, or people having dogs, doting on them, and then pretty much forgetting about them after they have kids. I’m the last guy to pretend to be an expert on dogs, but pretty much every dog I’ve known likes to be outdoors, to explore, to check out, investigate and figure out things. Or in other words, all the things I like to do. I wish when people thought about “getting a puppy”, they thought about that first.

I have a dog you can borrow... We can hike and biker her the same day and Im not sure there is such a thing as "tired" for this one. She's great off-trail too. Sounds though like that weimeraner has your name on it ;)

Yep... an australian shepherd about a year old... rescued her from Enoch shelter (poor thing) about 2 months ago in the midst of my eye surgeries. Randy is loving taking her with the bike...she stays close and loves it. We hiked with her up off shoreline this weekend and cant wear her out!