OK this is it. My most politically incorrect, sure-to-piss-people-off post ever. It also includes a bad word (near the end.) OK actually 2 bad words. But it’s something that just needs to be said.

It’s no secret to anyone who’s read this blog over the past few months that I’m not particularly religious. That said, I get along great with about 99% of religious people. In particular, I live in Utah, and get along fabulously with Mormons. They make wonderful friends, neighbors and coworkers, and my life is richer for having lived among them for close to a decade and a half.

And Mormons, it should be said, generally like me. 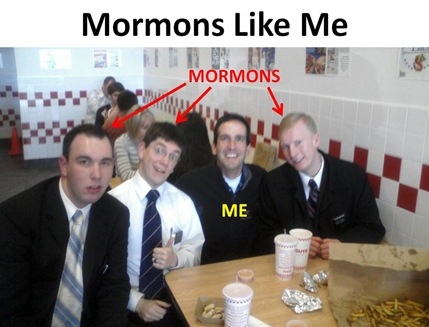 Part of this I think is because many of my personality characteristics- I’m upbeat, optimistic, fairly high-energy and enthusiastic- are traits that are well-received in Mormon culture. But more important is this: I don’t Mormon-bash.

My Mormon friends and neighbors generally know I’m a non-believer, and that I don’t believe in golden plates, or divine revelation, or pretty much any of the basic tenets of Mormon theology. But that’s OK, because I don’t spend my time trying to tell them why they’re wrong, or what they should believe instead. And to their credit, my Mormon friends don’t badger me about what I should believe. Yes, once a year the missionaries knock on the door, Awesome Wife says thanks but no thanks, and that’s it. Nobody tells us we’re going to hell, or we’re living lives of sin, or anything like that.

Tangent: This is a good a time as any to share what my religious belief actually is, and it’s called “Have Mormon Friends.” You see, in the Mormon religion, you can be baptized after you die. So on the .000001% or so chance that the whole Mormon thing is actually true, I’m banking on at least 1 of my Mormon friends baptizing me after I’m dead, which will enable me to get on board with the whole Heaven-Program in the next life, without having to give up beer, Sunday biking or 10% of my income in this life. This is why I love Mormonism; it’s like COBRA, in that you don’t have to pay the premium right away.

But there are religious folks who do tell me I’m going to hell. Who are working every conversation about, well, anything, around to try to morph it into a pitch for their brand of “Christianity”, and who go on and on about how Jesus has changed their life and how I should let Him change my life and yadayada, because if I don’t by the way I’m going to burn for all eternity in a lake of fire

(all the while smiling as they tell me this) and it gets to the point where you just avoid these people and their single-minded, zombielike pitches… There are all sorts of names for these folks (Born-Again, Evangelical, Pentacostal), and they’ll aggressively correct you if you use the “wrong” term, so I’ll just use the simplest term, one that pretty much all of them hate: Jesus Freaks.

What Does All This Have To Do With Bikes?

Now I’m bringing this up for a reason, and that is within the cycling community, there are a group of people who exhibit many of these same zealous, “convert” traits: Singlespeeders.

On the face of it, a singlespeed shouldn’t be controversial; it’s just a bike with one gear. They’re lightweight, mechanically simple, and easy to maintain. But oddly, nearly every Singlespeeder, once they switch over, it’s not enough that they just ride their singlespeed and have a good time. No, for some strange reason, every new singlespeed convert feels they have to become the Billy Graham of Singlespeeding.

These evangelists are always saying things to me like: “I never ride my gear-bike anymore…” “You just have to try a single; it’s so much better…” “Why don’t you just try my singlespeed?” Just like Jesus Freaks, some are more fanatical than others. Some Jesus Freaks for example, won’t even dance, or socialize with non-“Christians”, or listen to non-”Christian” Rock. Similarly, there’s a subset of Singlespeeders who practically never ride with geared-riders, and who disdain suspension- rear or front. “Rigid is the way to go”, they say, “it really lets you feel the trail…” Really? If you really want to feel the trail, how about you just freaking WALK it? Seriously, there is nothing natural about a bicycle, and lightweight suspension was the single best innovation in the ~150-year history of the sport.

Tangent: The other group I’ve experienced this with is Harley-Davidson riders. (Long-time readers may recall that I used to be way into motorcycles.) This group, with its slavish devotion not just to an idea, not just to a design, but to a specific corporate brand, are surely the most pathetic and intolerant zealots of all.

Nested Tangent: Harley-ism offends me not just by virtue of its zeal, but because it celebrates fundamentally bad engineering.

Here’s a quick example: the distinctive, uneven, always-about-to-stall, idling cadence of a Harley-Davidson motor. The reason for this is that a Harley ignition delivers a spark to both cylinders on the power stroke of either cylinder, meaning that when the firing cylinder receives its spark, the non-firing cylinder- which is on its intake stroke- receives a spark as well. At normal running speeds the unneeded spark has no effect, but at engine speeds below about 3,000 RPM, the spark actually creates a small backfire in the non-firing cylinder. So that uneven idle is the product of near-continual backfiring.

Back in the 1920’s or so, all automobile and motorcycle ignitions worked this way. But any “modern” ignition with any kind of functional timing system has solved this problem for nearly a century. But Harleys, in their misguided yearning for “authenticity”, sport a living fossil of an ignition system, the results of which we all have to listen to at stoplights. (Remember this example; I’ll return to it in a couple of days when I talk about enzymes. Really.)

The sad thing about all this is that at an intellectual level, I get the fundamental coolness of a singlespeed. I’ve spent countless hours installing, repairing, tuning and dinking around with derailleurs, shifters, cassettes and various and associated cables and ferrules, and the clean simplicity of a singlespeed drive-train is inherently appealing to me. But I’ve been so turned off by the crazed-evangelist approach of so many singlespeeders that it’s soured me terribly on the whole thing.

Tangent: This, by the way, is why I’ll probably never try yoga. I get the strength and health benefits, but just can’t stand the zealous pitches from so many of its practitioners, particularly when combined with the hocus-pocus, New-Age-horseshit baggage that always seems to go along with it.

OK that’s it. That’s my rant. The blogs of middle-aged men are filled with rants, a trend I’ve tried hard to avoid. But sometimes, you gotta say your piece. So go ahead, send your hate-mail and nasty-comments to ihateyourplantblog@gmail.com; I need to get back to the Sonoran.

Amen! While I feel the spirit god of SS stirring in my soul every time I get on my rigid SS and embrace the SS gospel fully I, like you among your fellow Mormons, strive to bike in harmony with the squishy framed, gear enabled bikers. I know that someday the still small SS spirit will whisper quietly to them and they will see the error of their ways.

You must not have many fixed gear riders out there. They make the singlespeeders look like Lutherans.

Hah! Singlespeeders and fixie folks are positively mellow compared to some of the recumbent riders. I stirred up that nest awhile back with this:

You've given me a great idea for a new business. I hope the url 'mormonfriendfinder.com' isn't taken.

Dude, that was such a funny post--and I'm a SS rider and Mormon to boot!

P.S. Seriously, though, you should try a SS--and, hey, why not get baptized while you are at it! ;o)

I am so old I can remember riding a few single speed bikes because that was all that was available in the small town I grew up in.
I then graduated to a sturmey archer 3 speed and it was heaven.
Then came 10 speeds and as I live in an area that is relatively flat it was more than enough.
Time went on, I got fat, I took up long distance touring and the loads that hat entails.
I love having granny gears to get up the steep bits, and then higher gears to cruise on the flats. I never pedal down hills because god put them there for us to enjoy in comfort and ease.
I never feel the need to tell others to adopt my style of cycling and I'm sure the fervor of nearly any converter is indirectly proportional to their own commitment level.
Those who push the most do so because at heart they know that what they are pushing is mistaken.

I guess I'm lucky - I haven't had any SS freaks assault me. Sure they've extolled the virtues of the SS, but not to the point of pushiness. And I've been on a few rides with SSers and we just rode.

I reconsider SS once in a while, and I could go into the pros and cons and reasoning but suffice to say I don't think it's for me.

It's all cycling, it's all good.

brother can I tell you about the new 29er revolution. You have to try it. You will never want to ride a 26" bike again.

After I get you hooked on that I would like to show you my 29er single speed......I hear talk of a 36er group, but they are too closed minded....

Genghiskhan- I have taken the liberty of adding you to my MFWWBMAD (Mormon Friends Who Will Baptize Me After Death) list. I'm counting on you guys, so don't let me down!

OC--I've seen a little of those 36-inchers, but pshaw, they gots nuthin' on the offroad penny farthing dudes...

On a tangent, try Pilates if yoga is too new-age for ya. All the asskicking, less dogma.

(yes, it has a reputation of being for girls, but I defy you to find a picture of Jospeh Pilates and tell me he wasn't all man.)

// what with the triple chainring and the Pilates it's amazing I haven't grown ovaries yet.

PS: I though you were joking about the offroad penny farthings, but nooooo....

KV--mea culpa; I was joking! But, I'm not surprised--thanks for posting that hilarious video. Next up, can you dig us up some off road recumbent riders? ;o)

As a Christian, I get a little nervous thinking a slacky 11th century scribe could have misinterpreted the Greek word “PHERON” (meaning “bears”) with the Greek word “PHANERON” (meaning “manifests”) so I am somewhat sympathetic to people questioning the accuracy of scripture. But as a smug bike-geek, I am just baffled you don’t keep a single speed in your stable.

And your geared bike won't work there either

Off road penny farthing riding. Epic. Your posts are awesome as are the comments, I really enjoy them and learn a good too along the way! Thanks!

Was that supposed to be funny? Because it was funny. Really funny. Funny enough that I got off of my lazy duff so as to login to my google account and leave a comment.

we landed on the moon