No cool plants or chemistry graphics or bike-related rants today- just a quick funny story related to the singlespeed post.

Preamble (because a)it always takes me forever to get to the point, even when I am telling a “quick” story, and b) I couldn’t bear to do a post without at least one graphic)

One of the things I like about the Salt Lake metro area is that even though it’s only a little smaller than the other 3 cities I’ve lived in/around (Boston, Philadelphia, Denver) it’s somehow just below some kind of critical social threshold whereby you always eventually run into everyone you know. If you lose the contact info of a former coworker, or friend of a friend you were hoping to see again, you don’t have to worry, because sometime you’ll run into him or her again. It may take a year or two, but eventually- getting coffee, in a lift line, at a trailhead or shopping at Dan’s- there he’ll be. This story is a great- if somewhat accelerated- example. 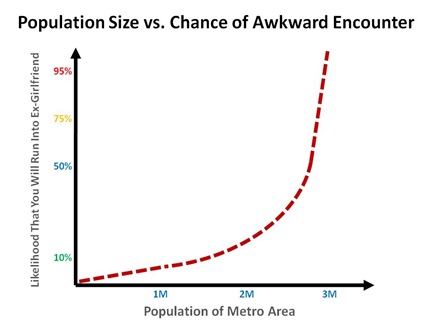 Tangent: This works out OK for me, because I moved here as an adult, and dated a total of 1 woman in the state- she who became Awesome Wife. So although I routinely run into old biking friends or past colleagues around town, I never have to worry about old encounters from my awkward adolescent/early adult years. I never run into old girlfriends, or former gym teachers, or my old piano instructor, or bullies who picked on me in junior high school, or anybody who ever saw me smoking pot or dancing to KC and the Sunshine Band. If I had grown up here, I would long since have had to move away.

So late week before last, I was out having lunch with Jason and another coworker. I’ve mentioned Jason before; he’s one of my Mormon coworkers and the friend who’s supported me in LOTOJA the last 3 years.

I’d been cooking up the singlespeed post in my head around then, and thinking about the religion analogy, and how cool it would be if I had a picture of me with some missionaries to use in the post. We sat down to eat, and about 5 minutes later a group of missionaries sat down behind us. So Jason took the photo of me with them (right)that I used in the post last week. (I should mention that the missionaries were way cool about posing for the pic.)

So Friday night, Jason goes home and his wife says, Hey, I invited the missionaries over for dinner. It’s Elder X (whom they’ve already known for a few months) and his new companion. And Jason is like, Hey, whatever, sounds good.

Explanation for Non-Utah/Mormon Readers: When Mormon missionaries are out in the “field”, they’re often invited over for dinner by families of the local congregation, or “ward.” This is generally regarded as a nice thing to do, as it gives the young missionaries a decent home-cooked meal, and some friendly companionship with fellow church-members. Missionaries always work and live in pairs; a missionary’s current partner-missionary is called his “companion.” Missionaries rotate companions every few months or so (the idea being to pair more experienced missionaries with newbies) and so the missionary having a new companion wasn’t at all unusual.

So an hour or so later, the doorbell rings, and in walks Elder X and his new companion. They sit down to dinner, and Jason is thinking, Man, this kid looks familiar… and then it hits him- he was the blond-haired missionary from the photo! 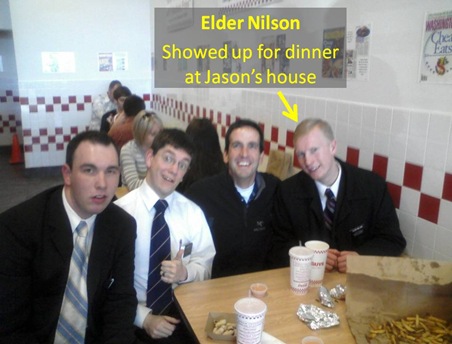 They had a good laugh about it, and at the missionary’s request, Jason emailed him the photo. (Missionaries apparently aren’t allowed to surf blogs. Not even exceptional, highly informative, big-time science blogs.)

It warms my heart to think that my handsome mug will grace some missionary’s scrapbook. That’s one more member-friend to baptize me when I’m gone; between Jason, GenghisKhan and Elder Nilson, I am so going to Heaven…

I'm more interested in your lunch experience.
That is, is Five Guys as wholesome and full of awesomeness in Utah as it is on the East Coast?

Joe- it truly is. In fact Jason is harassing me this morning to grab lunch there again today, and so I am currently agonizing between giving in to the red-meat-fest and the 5-mile lunchtime run I had planned... what to do... what to do...

mhum.... it's amazing the predicaments we put ourselves in every day.
On the one hand, we could run 5 miles, burn 600 calories and eat a home-prepared meal of a lean turkey sandwich and carrot sticks. While on the other hand we could just go have a double-bacon cheeseburger and a gallon of fries, weighing in at probably 2200 calories.