So, like I was saying, we had a great weekend in St. George. I’m going to cover 3 things in this post: mtn biking stuff, family stuff, and plant/fungus stuff.

I left work early Friday, so we were able to drive down in daylight. As we descended past New Harmony and down towards Toquerville I was surprised to see snow levels extending down to 4,000 feet, ruling out Gooseberry and Little Creek. So my dawn rides were down on the Floor level, close in to St. George, which turned out to be a blessing because it led me to a new (for me) ride: Zen Trail.

OK, so why didn’t anyone tell me about Zen trail before? This trail is amazing! Fun combination of tricky technical, fast singletrack and killer views. And to top it all off is its convenient location- the trailhead is probably 10 minutes from I-15. I rode it shortly after dawn, and saw no one, except for this hiker/camper, whom I salute on his (or her, couldn’t tell) outstanding campsite selection.

Side Note: UtahMountainBiking.com implies that Zen Trail is tougher than Gooseberry- it’s not. Though there are a ½ dozen or so Gooseberry-like moves (which can easily be walked) the vast majority of the ride is ledgy singletrack, similar to the semi-technical sections of Barrel Roll, but maybe 25% more technical…

The riding was wonderful. It was my first aggressive riding on tubeless, and everything worked flawlessly. And yes, the ride felt a bit different, but since I’m running new tires (which I hadn’t previously run with tubes) this call is extremely unscientific, and I can’t honestly say whether tubeless has a different feel, or if this was just some “Emperor’s New Clothes” placebo effect…

Tangent About The Fat Cyclist And Tubeless: So when I was debating whether to go tubeless, I asked a number of tubeless friends about it, all of whom recommended it. One of them was my coworker, the Fat Cyclist. Fatty said, oh yeah, tubeless is great, no problem, you’ll love it, totally hassle-free. So I went for it.

I spent 4 frustrating nights in a row in my garage screwing around with sealant, a compressor and bucket of soapy water chasing down mystery leaks. Finally, after nearly a week, I got the first tire to seal and hold air reliably. A day or so later I saw Fatty at work and mentioned my experience. Fatty said, “Hey you’re a braver man that me!” Confused, I asked what he meant? He said, “Oh I never install tubeless myself- I always take my wheels to the shop! And yeah, it always leaks, I pump up my tires before every ride…” Uh, thanks Fatty- that would have been excellent information to have before I went tubeless…

Anyway, I’m happy to report that both tires are leak-free, though there is probably about a quart of sealant in my front tire now…

So it’s taken me 9 years, but I have finally actually come up with a bit of Genius Parenting Insight. Are you ready? Here it is: Kids Love Animals. That’s it, and yes it took me 9 years to figure it out. 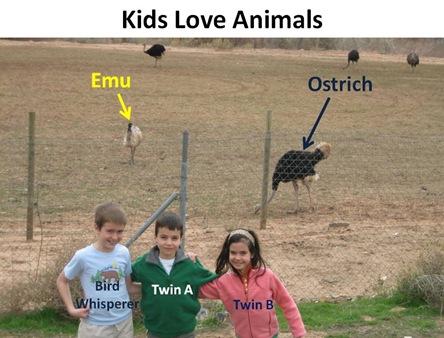 This weekend we took the Trifecta to amazing vistas, a national park, and a volcanic lava field, but the absolute hits of the weekend were the 2 fenced fields we drove by: 1 with elk and bison, the other with ostriches and emus. Bird Whisperer was particularly enamored with the birds, both ratites, whose eating habits and Gondwanan origins he informed us of in detail. (Yes, my 9-year old knows about Gondwanaland and Ratites. How scary is that? Next year I may just retire and hand this blog over to him.)

Part About Fungus and Plants

My favorite desert rides are in the Spring, when there are all sorts of things blooming and flowering.

Nothing is blooming down around St. George yet, but the lack of “action” in the desert made me pay closer attention to some of the small-scale things going on. First, the Blackbrush, Coleogyne ramosissima. On close inspection, they’re covered with these light, green “proto-leaves”. In the coming weeks they’ll grow, darken up and acquire a tough, waxy coating. This is the first time I’ve seen them at this stage, and I think it’s one of the earliest indicators of Spring I’ve ever noticed in the desert.

Second was this: a witches broom in Mormon Tea, specifically Ephedra viridis. I’ve seen plenty of brooms in both conifers and angiosperms, but never before on a gnetophyte. Whether this is a parasite or a mutation (either can cause broom-like growths), I don’t yet know, but I plan to return to brooms later this Spring/Summer.

But the most interesting was this: all the stuff growing on rocks. I never saw desert mosses look greener, healthier or lusher, and the relative lack of other plant colors around, really made the lichens stand out, and it’s these guys- moss and lichens- that I want to dive into in the next couple of posts.

But first, a brief detour, as I address a reader’s urgent plant-related question.

Next Up: All About Ski Bike Junkie’s Yard

Okay, so now I'm really stoked about two things: 1. Going to St. George this spring and riding Zen trail while I'm there; 2. An entire post dedicated to my yard. Woot!

I agree, Zen is sweet. I rode it the first time last year. I now need to try Barrel Roll and Barrel / Black Brush.

I went through some pain to convert my tires over to tubeless after a rash of flats. I do like the flat protection and feel of tubeless, but it is NOT without it's issues. I'm upgrading to wheels designed for tubeless which should make it nicer.