This Blog, Next Week: Something Different

So remember the “Uncle post”? The one where I said how I was fed up with winter and planning 3 escapes from it? The first was the Arizona hiking trip- done. The second was the Family/Biking/Lichen weekend in St. George (yes I know that is a weird combination, but I am telling you, that weekend rocked)- done. Now it’s time for the third escape. Tomorrow morning, Awesome Wife, the Trifecta and I are flying down for a week in Costa Rica.

Tangent: Am I nervous that by announcing my vacation here I could be inviting burglary? Not at all, because a) we are techno-luddites. Our stereo is 14 years old. Seriously, there’s nothing worth stealing in our house (except for my way-awesome pine cone collection) and b) my brother is house-sitting for us. Not “Phil.” My other brother- let’s call him “Ray.” I never blog about “Ray” because he’s a total borderline psychotic sociopath, whose only two interests are guns and raising Pit Bulls, whom he hand-feeds a strict diet of raw flesh (OK that last part I lifted from the Silmarillion...)

I’m not taking my laptop; I plan to be offline the entire time. So I won’t be actively posting again until the week of the 23rd. But rather than let WTWWU “go dark” for a week, I’m going to try something different. While I’m away, I’m going to set this blog to auto-post a story- my best tree story ever.

Side Note: In the real world I work in sales. “Going dark” is sales slang for when a once-active prospect or client ceases to respond or communicate in anyway. No return calls, no emails, nothing. That’s “going dark.” 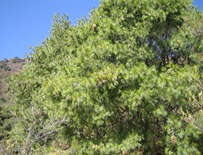 3 years ago I learned about, then became interested in, then researched and finally became obsessed with, the rarest Pine in the Western hemisphere, and one of the rarest trees in the world. It grows only on a single mountain in rural Mexico, in a part of Mexico that you would never ever go anywhere near otherwise. The tree is an enigma, with a bizarre genetic history and unclear origins. In February 2006 I traveled to Mexico, sought out and found the tree.

Almost 2 years ago I wrote the story up in an article format, with half an eye toward maybe trying to get it published sometime (which I never seriously pursued.) So here I am, a couple years later, running a botany-oriented blog, going offline for a week-plus, with this draft of this amazing tree-adventure story just sitting on my hard drive. So while I’m away- specifically tomorrow, and then every weekday next week- I’m posting it.

I’ve broken the story into 6 parts:

Parts 1&2: Background, how I learned about it, research into it, and all about its genetics.

Parts 3&4: Getting there, finding it, seeking out, meeting and befriending the landowners in a small Mexican town.

(Or in another words, the action doesn’t start until Part 3, but you’ll miss out on the Utter Freaky Coolness of this tree if you skip Parts 1 and 2…)

The format isn’t like my typical blog format; it’s written more like a stand-alone article, in a format similar to a New Yorker article or a multi-part travelogue on Slate. And it’s LONG. Each of the 6 posts is between 1200 and 2000 words long.

So here’s the deal: if you read this blog mainly for my tangents about Greek school or singlespeeds or Playboy Playmates, and get irritated when I write really long, involved posts, then you might be happier just checking back when I return the week of the 23rd. But if you’re into rare, fascinating trees, or if you’re into Mexican backcountry travel stories, or better yet, if you’re into Mexican backcountry travel stories about rare, fascinating trees, then I’ve got a wonderful story for you.

A word about pictures. As longtime readers know, I do my best to augment postings with serious science photos and informative graphics. The photos in this series are weak-to-absent until posts 5 & 6; then they’re great.

I’ve set the 6 parts up as drafts with timed auto-posting, but since I’ve never done this before, I’ve asked my brother- let’s call him “Phil”- to keep an eye on things while I’m gone to ensure things are running smoothly*.

*“Ray” doesn’t believe in computers; he thinks the government can see into your house – and even impregnate you with an alien embryo- through the screen display. I am telling you, the guy is whacked; don’t mess with him.

Anyway, it starts tomorrow. Have a great week.

OK readers... Ive read this and you SO need to stay tuned for this story... Its a goodie!! (Unless youve changed it up Watcher?) Are you serious about the guns and pitbulls? I might have to stop by now and get a look at this guy!?

And don't bother stopping by to see Ray- I'm the only hunky brother! ;^)

Looking forward to the multi-part tale.