The second angle is 45 degrees. And the reason I’ve been thinking about this angle is that we’ve now passed the point in the year where the noon-time sun is lower than 45 degrees in the sky. Pretty much everybody knows the Sun is lower in the sky in Winter and higher in Summer, but we don’t often pay attention to how high or low it is. How high it is on any particular day depends on where on the Earth you are, or more specifically, what Latitude you’re at, as well as what day of the year it is. The day of the year matters of course because the Earth is tilted at 23 degrees relative to the orbital plan of the Earth around the Sun, and the Latitude matters because in most of the world- anywhere North of the Tropic of Cancer or South of the Tropic of Capricorn- the further away you are from the equator the lower the Sun will appear in the sky.

Tangent: I’m typing this post on a flight to Atlanta- my first leg of a 20 hour trip to Prague. And I can’t let this moment pass without noting that I have suddenly realized a Great Truth. This is way up there, like the Four Noble Truths of Buddhism. And so I will call it the Fifth Noble Truth. Here we go:

For millennia, wise men, priests, kings, philosophers and writers have debated good and evil. And they have debated what is Good Action and what acts or thoughts are Evil. They’ve started religions, movements, revolutions and wars over this question. What makes a man Good? What makes a man Evil? Is it kindness? Altruism? Charity? Baptism?

Right here, right now, I have come up with a complete, final and true answer to this question, the fundamental question of the ages, the question of Good vs. Evil. Here it is:

If you recline your seat on an airplane, you are an asshole. It doesn’t matter if you’re “Christian” or give to charity, or help out with the Boy Scouts/PTA, or win the Nobel F***ing Peace Prize. If you recline your seat on an airplane, you’re Evil. If you don’t recline, if you say, “Hey I’m a grown-up. I can sit still for a few hours and not act like I’m at the dentist’s office getting my teeth cleaned. I can show some basic human consideration for the 6’2” guy sitting behind me…” then you are Good. 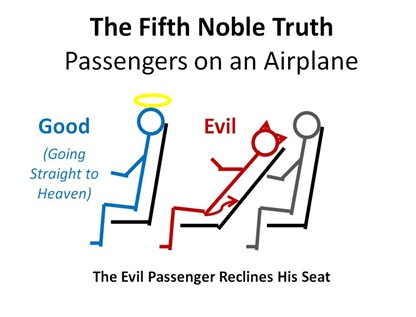 You know, we all love to go on about how Bad other people are and how Good we are, but generally in our day-to-day lives, we don’t really have to do anything special to choose Good over Bad. On a plane, we’re all given a wonderful opportunity: to choose Good at a minimal cost to ourselves. Choose Good. Don’t recline your seat.

Corollary for Readers Want To Be Good But Are A Bit Lame: If you feel you absolutely must recline your seat, turn around and look at the guy behind you. Don’t do it unless his/her seat is reclined.

Anywho…at the Spring and Fall Equinox, the aspect of the Earth to the Sun is such that the effect of the Earth’s axial tilt on the relative position of the Sun in the sky is neutralized, and on those days, if you’re standing at the Equator the noon-time sun appears directly overhead.

Side Note: A lot of people don’t know what the Tropic of Cancer means, other than the Henry Miller novel. The Tropic of Cancer is the latitude at which of the noon-time sun appears directly overhead on the Summer solstice. It lies at 23 degrees North- which makes total sense, since that’s how much the Earth is tilted- and it provides the maximally “tilted aspect” to the Sun on the solstice. The opposite latitude- where the noon-time sun appears directly overhead on the (Northern hemisphere’s) Winter solstice- is the Tropic of Capricorn.

On the Equinox, the Sun’s maximum height in the sky is equal to 90 degrees minus your latitude. Salt Lake is a bit above latitude 40 degrees North. So on September 22, the noon-time sun reached just a bit under 50 degrees in the sky. 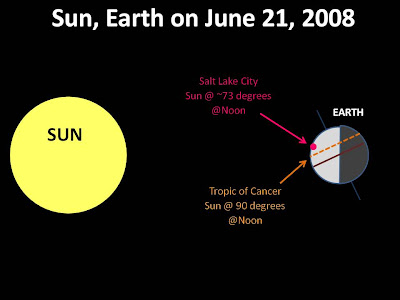 Every day it gets a bit lower; eventually, on December 21, it’ll “bottom out” at just 27 degrees. (Here’s the math: we’re at 40 degrees North. Add 23 degrees for maximal tilt away from the orbital plane. Subtract 63 from 90.) Each day until then the Sun peaks just a bit lower in the sky. 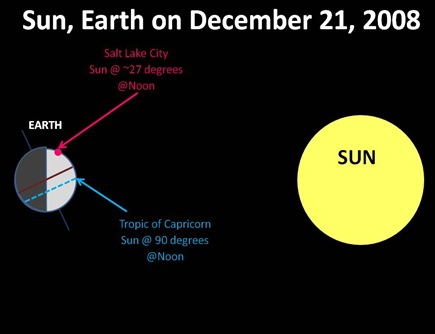 Using some rough kiddie-math, on about Wednesday last week, the Sun peaked in the sky at just under 45 degrees. It won’t peak in the sky above 45 degrees again until around February 28.

This angle is significant because it means that along the Wasatch there are now a number of places that are in permanent shade, particularly in North-facing nooks and crannies in the canyons (pic right = sample “cranny” in Mill Creek Canyon.) Already on otherwise clear trails there are frequent “mini-winter” spots of packed snow/ice and frozen mud, largely immune to the Sun’s warming effects over the past week. 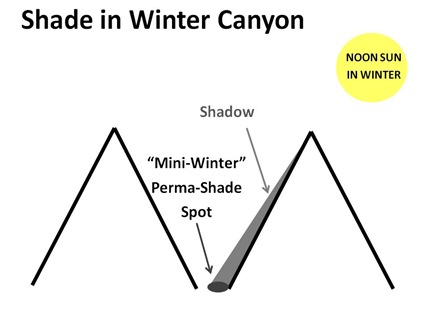 Tangent: This low sun-angle will be greatly appreciated over the next couple month by backcountry skiers. In December and January the low sun means that snow surfaces will remain fresh and powdery for several days following a storm. But by March or April the snow following a storm will typically be good for the day or two following at best.

The reason I think so much about the Sun’s angle and light and dark is mountain biking. Over the last month I passed the point where now a majority of my riding time involves some portion of riding in the dark, either at the beginning (before work) or end (after work) of the ride. I’ll keep mountain-biking till the snow shuts me down; already my brown fat has tuned to the chilly temps and my vision and balance have tuned to the conically-illuminated world of my bar and headlamps- a distinctly different perspective than the same trail illuminated by an overhead sun.

But this past week was also a full moon, and the first full moon of the season in which the moon peaked in the night sky at higher than 45 degrees at “Moon-Noon”.

“Moon-Noon” is what I call the point in the night when the Moon is at its highest point in the sky. And because the Moon’s position changes every night as it orbits the Earth, Moon-Noon is only at the same time once a month. On the night of the full moon it’s roughly around midnight, but each day following the full moon it’s a little bit later. (The Moon orbits counter-clockwise around the Earth, and so appears to transit the sky from West to East over the course of a month.) The morning I left for the airport (Saturday 10/18) Moon-Noon was right around dawn.

People often notice that a full moon seems brighter in Winter, and often attribute the effect to the moonlight on the snow. That’s often true, but the more important reason the Winter full moon is brighter is because it’s higher in the sky. On December 12, it’ll top out at around 70 degrees in the night-sky in Salt Lake. 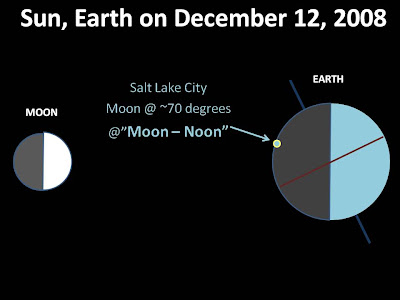 Our Moon Is Different

The reason the Moon is higher in the sky in Winter is because our Moon is not like other moons. Actually it’s unlike other moons in a number of ways, and the most significant difference is size. Our moon is HUGE compared to the Earth- a full 1/6 the diameter of the planet which it orbits. For comparison, the only moons larger than ours in the solar system are Ganymede and Callisto (the 2 largest of Jupiter’s 60+ moons) and Titan, the largest moon of Saturn, and both Jupiter and Saturn have masses hundreds of times that of Earth’s.

Tangent: The only planet in the solar system with a moon that is proportionally larger than ours is (the recently-demoted-to-dwarf-planet) Pluto. Pluto’s moon Charon is large enough that the 2 bodies actually orbit point in between the 2 bodies (though much closer to Pluto) which technically makes them “twin” planets. (Or I guess “twin dwarf planets” now.) 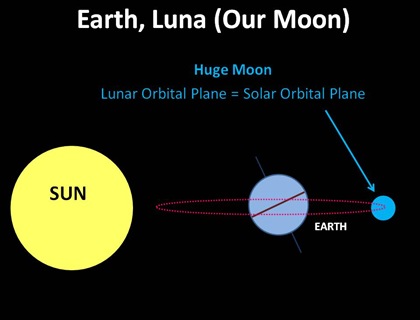 But another way in which it is unusual is that the plane about which it orbits the Earth- the Lunar Orbital Plane- is pretty close to parallel with the plane about which the Earth orbits the Sun- the Solar Orbital Plane. A “Normal” moon orbits a “Normal” planet on a plane that’s pretty much parallel to that planet’s equator. So if our Moon orbited us like a “normal” moon, the full moon would always appear at the same height in the sky at Moon-Noon, unless you changed latitude. 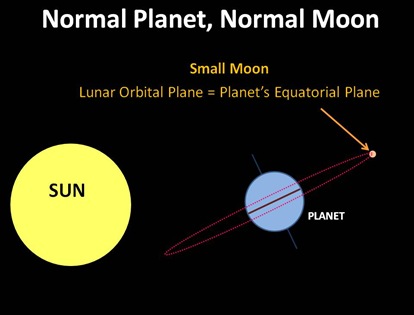 If you can make it work logistically, mtn biking, hiking or skiing at Moon-Noon is fantastic. While not quite bright enough (usually) to enable color vision in a human eye, the moonlight provides distance, depth and perspective normally lacking at night, and even enough light to stop and read a map. And the high angle of the Winter moon minimizes the occurrence of “dark spots” on the trail, which are so frequent in the Summer Moon-Noons.

The angle also makes me realize that all those North-facing nooks and crannies which are sun-less all Winter long; all Summer-long they are moon-less.

I Run Into Some Old Friends

A couple of these perma-shade crannies are already appearing in Dry Creek. Tuesday morning I pedaled up in the early pre-dawn light. About a third of the way up the canyon I heard a familiar squawk, stopped and looked around.

In a stand of scrub oak to my left were a couple of Stellers Jays, and I realized that this was the same stand of Oak where I saw them way back on March 29, went the world was just waking up. Now that it’s going back to sleep, the Jays- probably the same ones- have returned to the same stand. Stellers Jays, like all Pine Birds, have excellent memories, a valuable trait in recovering cached seeds. Experiments done on other corvids (Crows, Ravens) have indicated an ability to distinguish between different humans. I have a hunch these guys recognized me too.

When I walked out in the driveway to get the paper Saturday AM I made a mental note of the moon’s phase and position. When I travel to other continents I always gain a strange comfort from seeing the same moon in the same phase when I arrive.

I’ll post this when I get online at the hotel. I doubt I’ll be posting much if at all over the next 2 weeks (barring perhaps the occasional Euro-travel-rant.) When I come home in 2 weeks, the Oaks will be pretty much bare and the foothills solidly brown or white (snow.)

I enjoyed this astronomy post. Another cool aspect about the large moon in the Sun's plane is that it allows for total solar eclipses, and the cool science that can occur during them.

One of the early proofs of Einstein's relativity theory came from the bending of light observed during and eclipse that could be observed at no other time.

Really enjoying the bugs, birds and other topics. (plants are not my thing I guess.)