All About Our Christmas Tree. And Gondwanaland.

So if you do a blog about trees, and you buy a real Christmas tree, I think it’s pretty much a law that you have to blog about your tree.

The origin and significance of Christmas trees is somewhat of a mystery to me. I have to admit that while I was in Sunday School, I wasn’t always paying 100% attention, but I really don’t remember the part where Jesus told the Pharisees to start decorating trees. I’ve even searched the online bible for the word “conifer”, with no success.

Tangent: I was raised in the Greek Orthodox church, which is just weird and irrational enough to forever turn you off to organized religion, without being quite creepy or bizarre enough to permanently scar you.

My siblings and I, who are 2nd-generation, ¼, Greek-Americans (our grandfather emigrated from Cyprus in the 1920’s) are probably listed in some government file in Athens as the Lamest Greek-Americans Ever. None of us ever really knew what the hell was going on during the rather cryptic and incense-filled church liturgies, in part because none of us understood Greek. (Actual pic of our old church in Lexington, MA, below left. I swear you can find a pic of anything on the web nowadays…)This wasn’t for lack of trying on the part of my parents; for 6 years, 1 day a week after school, we attended Greek lessons. 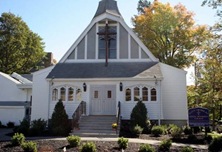 So that’s 312, 90-minute lessons, or 468 hours of Greek language study. It never stuck. About 5 or 6 years ago, my sister- let’s call her, ”Elizabeth”- and I were having dinner in a Chicago restaurant, and decided to list all the Greek words we still remembered. We came up with 5 words: the words for “Money”, “Tip”, “Prostitute”, “Shut up”, and another word for “Shut up.” (Apparently telling people to “Shut up” holds a place in the Greek language analogous to “snow” in the Inuit language; an activity of such frequency and vital importance that there are like 20 different words for it…) If I ever make it to Greece I’ll try to work all five into a sentence.

However it got started, we’re a Tree Family, and by a Tree Family, I mean a Real Tree, not a Fake Tree. I am a complete Real Tree snob. To me, getting the “Christmas Tree Feel” from a fake tree is like achieving happiness through illegal drugs. I am like the Nancy Reagan of aluminum trees: Just Say No. I recognize that buying a Real Tree involves a whole lot of plantation-style growing and cutting- oops I mean “harvesting”- of trees, but it’s gotta be a lot lesser impact on the environment than making millions of aluminum trees that archeologists will be digging up 100,000 years from now.

Of course, the best, most environmentally-friendly solution is to have a real live tree, that you keep alive, like in a big pot, and in fact I did this for a few years way back in Life 1.0. In my house in Colorado there was a “Norfolk Pine”, about 5’ tall, which served as a Christmas tree in December, and a house plant the rest of the year.

A Norfolk Pine actually isn’t a pine. I guess technically it’s a PLT, but it’s way more interesting because it’s a Southern Hemisphere-PLT. The Norfolk Pine, Araucaria heterophylla, is one of 19 Araucaria species.

The Norfolk Pine is endemic (meaning native to nowhere else in the world) to Norfolk Island, a dinky little (13 sq miles) island which sits in the middle of the triangle formed by Australia, New Zealand, and New Caledonia. Remarkably, A. heterophylla now graces homes, gardens and lobbies in millions of locations across 6 continents; humanity has facilitated a veritable diaspora of this charming tree.

It’s not certain, but the Araucaria family may be a botanical legacy of Gondwanaland, the ancient Southern-hemisphere super-continent (as Pinaceae may well be a botanical legacy of Laurasia, as we talked about when we looked at Red Pine and Scots Pine.) Gondwanaland, which existed in various configurations between 550 million and 120 million years ago, included what is now Antarctica, Australia, South America, Africa, India and Madagascar. Gondwanaland appears to have other biological legacies, including a mammalian legacy- marsupials- and an avian legacy- the ratites, a family of large flightless birds whose descendants include the ostrich, emu, rhea and now extinct Elephant Birds of Madagascar (genus = Aepyornis) and Moas of New Zealand (genus = Dinornis.)

The real jewel of this botanical legacy is New Caledonia. Unlike Fiji, Hawaii, or Tahiti, New Caledonia isn’t some volcanic-Johnny-come-lately, pop-out-of-the-ocean, let’s-have-a-luau, Pacific island. It’s a several-hundred-million year old true remnant/ fragment of Gondwanaland, and as such supports a spectacular native flora which includes 13 of the 19 Araucaria species, all endemics.

Man, that was a great little tree. I wonder whatever happened to it? My ex probably chucked it…

Anyway, back to our Christmas tree. So Saturday Twin A and I headed on over to the tree lot.

The most common trees you see on Christmas tree lots are Firs, including White Firs, Silver Firs, Fraser Firs, Noble Firs and of course Grand Fir. The cheapest trees on the lot are usually Douglas Firs, which grow fast, but whose foliage never appears quite as lush, and whose scent never seems as rich, as the true Firs. I hear people also use real pines for Christmas trees, namely Scots Pine or Jack Pine, but I don’t recall having seen them on a lot around here.

We poked around for a bit, and then Twin A picked out the tree he like best. He made an excellent selection- a Grand Fir, Abies grandis- which I have now become convinced is the Best-Smelling Tree Ever.

There are 48 species of Fir in the world; we’ve looked at 2 that are native to Utah- White Fir and Subalpine Fir- this year, and we visited Red Fir during our Lake Tahoe trip. Grand Fir is the giant of the genus, reaching heights of over 200 feet, and diameters over 6 feet. It’s a tree of the Northwest, and for the most part hugs the coastline between a little South of Mendocino and mid-way up Vancouver Island.

In the Northern half of its coastally-oriented range it stretches eastward and inland to the Cascades, where it mixes and frequently hybridizes with White Fir. It’s also present much further inland, in the Idaho panhandle and Western Montana, but the variety there, A. grandis idahohensis, is a shorter, though more cold-tolerant, variety of the species. 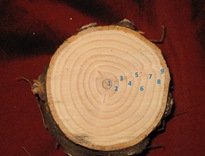 Our Grand Fir is about 6 1/2 feet tall and as old as the Bird Whisperer. Since Saturday it’s been sucking up water like crazy and that’s what we want. So long its xylem-tubes remain water-filled and the water-columns within taut, it’ll hopefully keep transpiring actively through the holiday, and continue to fill the living room with its fragrance. But if air bubbles, or embolisms, start appearing the xylem-tubes, the water-tension will fail, transpiration will break down, and the tree will begin to decay.

Right now it’s a lush little piece of the Northwest, brightening up our brown and gray Wasatch Winter. Our living room smells like a temperate coastal rain forest, and the last couple of mornings I’ve come downstairs and sat for a few moments in the pre-dawn gloom, drinking in its almost hypnotic scent.

Next Up: The Official Watching The World Wake Up Suggested Holiday Gift List

You would LOVE the Distribution of Conifer and Taxad Genera in Time and Space (a favorite of mine), by Rudolf Florin! Maybe you can find it on interlibrary loan--lots of great range maps!

While you're at the link, check out all the bios and refs on this great site. I use it all the time...

This blog could use a few more photos of the Dark Pope (as a friend once nicknamed the Greek Patriarch).

Here's my question: Why are Christmas trees so flammable? Are there less flammable "real" options?

Wow...makes me want to get a real tree. We are on illegal drugs "fake" tree over here. (Hey, DO use real butter, no margarine.) Mostly its just about me being cheap frankly... once they hit >$50, I bailed and bought an off-gassing plastic number.

I agree on the real tree thing. If, for whatever reason, I can't have a real one, I'll opt for none at all. Same thing with butter--dry toast is better than toast with margarine, in my opinion. I'm also a blue spruce snob, though, so that's the only kind of tree I ever get.

Phil- We aim to please, here at WTWWU. All of your questions will be answered in tomorrow's post...

SLW- thanks for the link, I'll check it out, and see if I can track down a copy of Florin's book.

Jodie- phew, that's a relief. If I knew you guys did a fake tree AND margarine I'm not sure we'd be able to hang together anymore!

Andrea, your Spruce-preference ("piceaephilia"?) may also be a good choice for another reason, as we'll see in tomorrow's post.