This is a fast, fun ride, with just enough ledges and rocks to make the intermediate rider at least think about dabbing, but nothing white-knuckle. The ride is a nice-flowing loop, with great views of the eroded badlands winding down into Cove Wash below, and the Beaver Dam mountains behind to the Southwest (pic below right.) I’ve stolen the map from utahmountainbiking.com, and refer you to them for excellent trail descriptions, mileage and GPS coordinates (though if you really need a GPS to do this ride, you probably shouldn’t be mountain biking in the desert…)

When you ride one of the excellent singletracks around St. George, if you don’t notice any other plant, you should at least notice this- Creosote. This amazing shrub, which over its 18,000 year history in North America has come to dominate the Southwest like no other plant, is immediately obvious. Its foliage is an olive green distinct from that of any other shrub in the area, and its form is distinctively “spindly.” It’s also usually the biggest shrub around on any of the “Floor” rides. I did a big post about Creosote back in May during Monocot Week (Man, was that a great week or what??), which I encourage you to check out before riding Barrel Roll- it is an incredibly interesting plant. 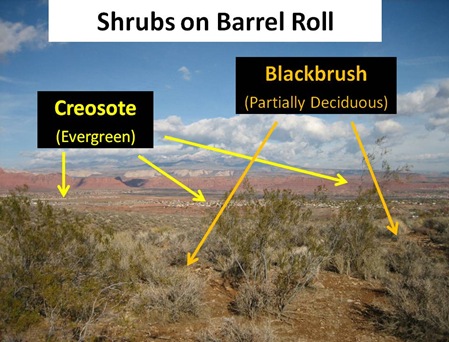 Probably the most common associate of Creosote on the Floor- and across much of the Mojave- is Blackbrush, which we looked at back in April.

And Blackbrush is interesting because it’s the one shrub that we’ll see plenty of on all 3 rides; it ranges seamlessly across 4 of the 5 terraces, always the same, monotypic species, the one constant companion to the Southwest Utah mountain biker. Interestingly, the Blackbrush, which I described back in April as being “partially deciduous”, appears to be pretty much “all deciduous” this winter down around St. George; wherever I rode over the long weekend, the Blackbrush was bare (pic right), or close to it.

Botanical Spotlight: Mormon Tea. We looked at Mormon Tea (genus = Ephedra) back in May near the Dirty Devil, and I talked about how it’s so interesting in that it’s just so way, unbelievably different from everything else around it, with a unique and strange evolutionary history. There are something like 20 different species and subspecies of Ephedra in North America, and they can be tricky to tell apart. But here on Barrel Roll trail (and on neighboring Blackbrush trail) you can see the see the two most common species in these parts side-by-side.

Green Mormon Tea, Ephedra viridis, is the most common in the Southwest. It’s the bright green ephedra, with the stalks sticking straight up, looking almost like little upside-down brooms. 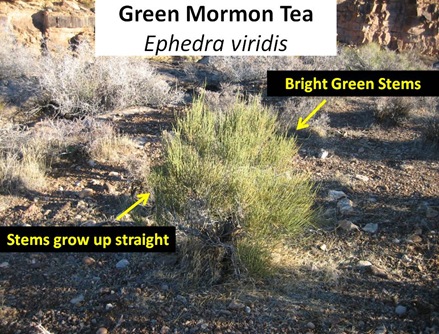 Torrey Mormon Tea , Ephedra torreyana, looks different in 2 ways. First is the color; the Torrey Mormon Tea is a light blue-green, almost pale in comparison to E. viridis. Second is the stem architecture, or “geometry”. Unlike the stems of Green Mormon Tea, those of Torrey Mormon Tea branch out at sharp- almost right- angles, in a form that is vaguely similar to that of Blackbrush. 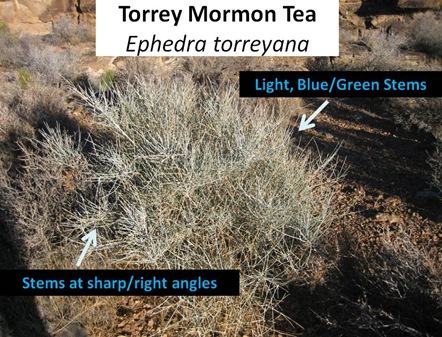 The two species overlap extensively on the “Floor” but don’t seem to hybridize much if at all. Of the two, Torrey is the more thermo-philic; it thrives down as low as 1,500 feet, but rarely occurs at over 6,000 feet. Green, on the other hand, hardly gets lower than the “Floor” (2,500-3,000 feet), but has been found as high up as 10,000 feet. Though the 2 species exist here in roughly equal numbers, when we get up on the Mesa level the Green will dominate.

The Floor is also interesting botanically for 2 things that are not here. The first is trees. The plants down on the Floor are all shrubs. Though some “trees” (Juniper, Turbinella Oak) do grow along some of the wash bottoms, and real trees (Cottonwoods) grow along the Virgin and Santa Clara Rivers, they’re otherwise absent from the Floor. The shade-less singletracks around St. George, great as they are, are no place to be riding mid-day in summer. Utah Juniper, the toughest, most drought-tolerant Utah tree, and the first to appear as you move upslope, can’t hack the brutal heat and dryness of the Floor in summer, and the spectacular Joshua Tree don’t quite make it up to this high, northernmost fringe of the Mojave. (The ones in the I-15 median don’t count; they’re planted.) 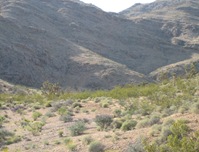 But after the ride, if we pop back in the car and drive another 10 minutes down I-15 in Arizona, all of that changes as we plunge into the Virgin River Gorge (pic right) and transition into the Basement. Suddenly we’re in the real Mojave, and Joshua trees are everywhere. Though there’s no singletrack in the Gorge, the convenience and accessibility of this part of the Basement make it well worth the short drive. Pull off at the rest/area campground about 10 minutes into the gorge and spend a little while poking around.

Tangent: If you want to ride amongst Joshua trees, the best places to do so are another 90 minutes South, outside of Vegas. But if you’re OK with doubletrack, there are numerous old 4WD roads (and plenty of open camping) just over on the South side of the Beaver Dam Mountains, still in Utah.

The second thing that’s missing from the Floor is a shrub. One shrub we won’t see anywhere on this, or any other “Floor” ride, is Sagebrush, which we checked out back in April. It’s completely absent. As a rule, where Creosote occurs, Sagebrush is absent, and vice-versa. It’s like the 2 shrubs are Superman and Clark Kent; you never see them in the same place, even though they’re similar in profile and seem to fulfill the same role in their environment. Each is the “alpha-shrub” where it grows, towering over neighboring smaller shrubs. And each produces the strongest, most wonderful- but very different- scent following a rain. If you crack your car window in the desert on a rainy night, more often than not, the scent of one or the other will tell you where you are.

Next Up: We head upstairs…