I’ve never been a big fan of sitting around the house, but if you are stuck around the house for a day in winter, one of the more interesting things to do is watch the bird feeder.

This will be the first of 4 posts (unless I flake out, change my mind or become distracted) related to the birds at my feeder. This first post will be a “Big Picture” post, talking about the significance of birds overall, and the ancestral relationships between the birds at my feeder. The 2nd post will look at birds in Winter, and the 3rd and 4th posts will zoom in on one species in particular. That’s the plan, anyway.

Over the past year I’ve done a few bird-related posts; in particular I blogged about 3 birds with a common theme. The birds- Steller’s Jay, Lazuli Bunting and Black-Headed Grosbeak (crappy photo from back in June, right)- are all in the midst of being “reacquainted” with an Eastern cousin- Blue Jay, Indigo Bunting and Rose-Breasted Grosbeak respectively- as a result as a result of human-created “woodland islands” across the Great Plains.

But in general I’ve shied away from birds, in part because I’ve been so occupied with plants, but also because there are so many great bird blogs out there. But though there are many wonderful bird blogs looking at species and ranges and behaviors, there don’t seem to be a lot of Big Picture blogs of birds, and the Big Picture is what I want to look at today.

150 million years ago (Jurassic period), the plant world was dominated by conifers. There were something like 20,000 different species of conifer, occupying every ecological niche from forest giant to small shrub, across all 7 continents. Conifers had attained their ascendancy by out-competing earlier dominant plant orders, such as Lycophytes and Cycads.

The animal world at the same time was dominated by reptiles, who had out-competed the earlier dominant land animal order, amphibians. Though mammals, and proto-sorta-birds also existed 150 million years ago, reptiles were clearly dominant, occupying every ecological niche from grazing herbivore to flying scavenger.

Over the last 150 million years, the most remarkable thing to occur in the plant world has clearly been the evolution and ascendancy of angiosperms (flowering plants.) Angiosperms have thoroughly and fabulously conquered the world, out-evolving, out-adapting and out-competing conifers in all but the harshest environments, and outright banishing them from large areas of the world (such as the Amazon and Congo basins.) Though conifers are still an important group (“division”, technically), they’ve declined to a shadow of their former diversity, with a mere 630 species worldwide, compared to an estimated 300,000 species of angiosperm.

Tangent: Angiosperms are almost certainly all descended from a common ancestor, the reason being that the hallmark of angiosperm reproduction- double fertilization- is so utterly quirky and weird that it seems almost inconceivable that it evolved multiple times. For a (sort of) simple description of how double-fertilization works, see this post.

But imagine if things had gone differently. Imagine if, instead of just angiosperms ascending, there had been another, totally different plant order to evolve out of Gymnosperms around the same time, and that this other, different order- let’s call them “Othersperms”- had evolved and adapted and radiated just as successfully and spectacularly as angiosperms, and that the forests, savannahs and grasslands of the world today were constructed roughly equally of both angiosperms and othersperms.

It sounds farfetched, fantastic, and maybe a bit silly, but it’s worth thinking about, because this is exactly what happened in the animal world. 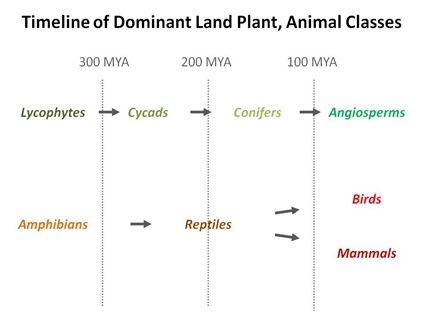 Over the last 150 million years- and more specifically over a mere million or so years 65 million years ago- the most spectacular thing to happen in the animal world has been the evolution and ascendancy of mammals and birds. Each evolved independently from reptiles, and each has been wildly successful (though from a pure species count, the birds win hands-down.) Today the animal- more specifically land-vertebrate- world is thoroughly dominated by birds and mammals, both of them, and amazingly, neither seems to be likely pushing aside the other anytime soon.

Now at this point a reader may be saying, “Wait a minute- birds and mammals don’t compete, they occupy totally different ecological niches. Mammals run around on the ground, and birds fly.” But this church-state like separation breaks now pretty quickly when you look at each group a little more closely.

Here’s a cool factoid: Of all the known mammal species in the world, about ¼ are bats. That’s right, bats. Bats that eat bugs or fruit or drink blood, and live on every continent except Antarctica. And why are bats nocturnal? Because when they fly during the day they get attacked/preyed upon by birds. If birds had never evolved, bats would have long since radiated into countless day-time species, and today we might well be watching colored bats at the feeder, raptor-bats hunting rabbits, and feeding semi-aquatic “duck-bats” at the pond at Sugarhouse Park.

And you can easily do a similar thought exercise for birds. And not just a thought-exercise, because the experiment’s already been done for us on numerous islands, New Zealand and Madagascar being the 2 best examples. When birds colonized these mini-continents in the absence of mammals, they quickly radiated out into all sorts of flightless bird niches, from grazing herbivore to aggressive, top-of-the-food-chain carnivore.

Tangent: The Bird-as-top-of-the-food-chain carnivore has even happened here in North America- at least twice in fact. The first time was ~50 million years ago, when various Diatrymas (genus = Gastornis) (pic right) up to 6’ tall stalked prey here. The second, much more recent version (15,000 to ~4(?) million) years ago) was Titanis walleri, which at over 8’ in height, had to be pretty much the Scariest Bird Ever.

Nested Tangent#1: T. walleri (melodramatic, rather overwrought artist conception/ dramatization left) appears to have been an import from South America, possibly via the Great American Interchange (GAI). For a quick GAI overview, see this post.

So, the deal with birds and mammals is this: either group could totally do all the things the other group does. But somehow they’ve evolved alongside each other, and today we vertebrates live in a weird, bifurcated world, a strange, apparently enduring balance between birds and mammals.

Back to My Feeder

The Winter visitors to the feeder are a much smaller group than the hordes we see in summer. Probably 99 out of 100 birds I see out there in Winter are one of these 6 species: House Finch, American Goldfinch, Black-Capped Chickadee, Dark-Eyed Junco, Scrub Jay and Northern Flicker. All except the Flicker are Passeriformes, the class of birds to which more than half of all bird species belong, and arguably the most successful group of land vertebrates ever to exist. (By comparison, there are more than twice as many species of Passeriforme than there are Rodentia, the most numerous class of mammals.) 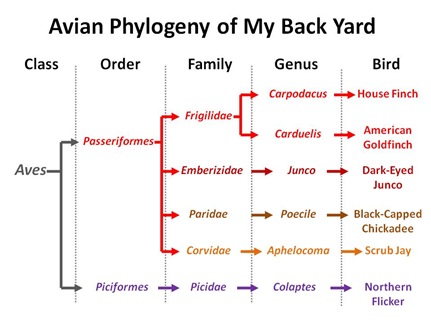 Within the “Backyard Passeriformes”, the House Finch and Goldfinch are the closest cousins, belonging to the family Fringilidae. The Black-Capped Chickadee and Dark-Eyed Junco represent two more families- Paridae and Emberizidae respectively, and the Scrub Jay is a member of the Corvidae family, which we’ve already met numerous times when looking at Stellers Jay and Clark’s Nutcracker.

Passeriformes arose around 60 million years ago- apparently down on my favorite prehistoric supercontinent, Gondwanaland- and are believed to be monophyletic (evolved from a common ancestor. For an explanation of monophyly, see this post.) It’s thought that the common ancestor was small woodland bird, stubby-tailed and drab-colored, but quite likely with some visible difference between the sexes, or sexual dimorphism. Sounds a lot like a House Finch (pic right).

Next Up: What’s the Deal with Migration Anyway, and Why Are These Birds Still Here?

Thanks for a very entertaining and enlightening post... almost enough to make me give up blogging! [grin]

I've got Pine Siskins at the office feeder, but not at home.

Birds at both feeders: red-breasted nuthatch, black-cap chickadee, dark-eyed juncos. Sometimes American Golds, if the dees will let them in.

Birds only seen at the home feeder: rufous chickadees (aka red-backed chickadees), scrub jays, northern flickers, house finches. The titmouse likes hiding under the hydrangea, but I've never seen him at the feeder.