More Solstice Geometry And The Most Awesome Graphic Ever

Yesterday, the Winter Solstice, the sun peaked at Sun-Noon (which was 12:25PM here in Salt Lake), at only 25.8 degrees. From hereon for the next 6 months it’ll peak a little higher every day until on June 20 it’ll peak way up at 72.6 degrees. That’s a huge difference- almost 47 degrees (or twice the Earth’s declination from the solar plane.)

Tangent: It’ll start to creep up real slowly, gradually, just a teeny bit each day, then speeding up, faster and faster till the Equinox, after which it will gradually slow its rate of descent gradually till it “stops” and starts descending again at the Summer Solstice. You can think of the Sun as a bungee-jumper who right now is just starting to rebound from the bottom of his/her jump. The reasons behind this changing rate of ascent/descent are fascinating, but are the topic of a whole other solar geometry issue, that I’ll put off for a bit… most likely till the Spring Equinox.

But when I blogged about this at the start of Dark Week, an astute reader- let’s call him “Kevin”- commented on how surprising it was that the sunrise and sunset azimuth angles varied by a whopping 66 degrees (I think it’s actually a bit closer to 63) between the Winter and Summer solstices. 66 (or 63) is a lot more than 47; what the heck is going on?

Explanation of “Azimuth”: The sunrise azimuth angle is one of those terms that sounds complicated, but is really simple. It just means the angle, measured from due North, that you go around the horizon to where the sun rises. So due East is 90 degrees, and due South is 180 degrees. On December 21 in Salt Lake the sun rises at 121 degrees, so South of East, but still more East than South…

This is one of those things that doesn’t make sense unless you can visualize it, and then it makes total sense. So I dinked around for close to an hour trying to come up with a suitable graphic until I got the brilliant idea of searching online for such a graphic. And I’m happy to report that I found the Most Awesome Graphic Ever. The University of Nebraska Astronomy Dept put together this tool that models solar position relative to an observer at any date, any time and any latitude on Earth. Not only that, but it has drag & drop controls to change date, time and latitude. It even has an animation mode with adjustable speed! (Seriously, if you’re already already bored with this post and want to blow it off, that’s cool, but just check out the Nebraska site.)

The graphics I’m using here are just screen shots from the U. Nebraska site, with angles added by me. 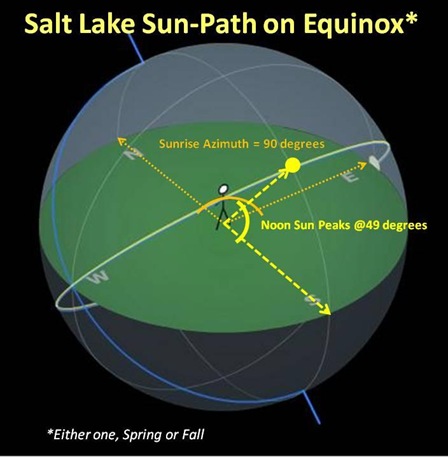 But as it climbs up in the sky of the Northern hemisphere, it does so in an arc that is tilted to the South by a number of degrees equal to the latitude of the observer. So at Sun-noon on September 21 in Salt Lake City, the sun peaks at just 49 degrees in the sky, which is 90 degrees (straight up) minus 41 degrees (latitude of Salt Lake.) Easy enough.

Cool Side Note: On the Equinox, the sunrise Azimuth is 90 degrees for every point on Earth. No kidding. It makes sense if you can visualize it. If you can’t, take an ornamental ball off the Christmas tree and play with it and a lamp until you figure it out…

Now by December 21, the high-noon-sun angle has decreased by 23.5 degrees (the Earth’s axial tilt) but the sunrise azimuth has moved south by 32 degrees, and the reason for this is that from the perspective of an observer, the horizon is always a 2-dimensional circle around that observer, which makes sense, since the Earth is a sphere. 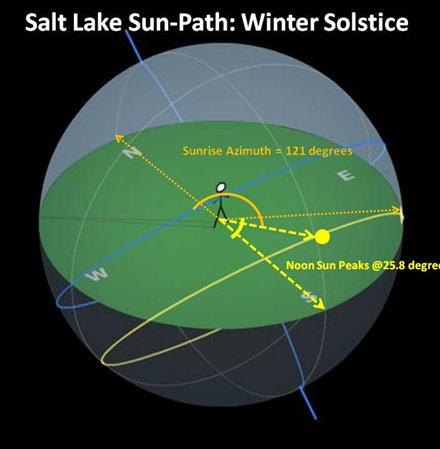 And while the arc of the sun has been moved 23.5 degrees lower in the sky in a due South direction, that equates to more than 23.5 degrees around the circle of the horizon, with the extreme example being that if the arc were lowered to where the peak sun-angle at noon were 0 degrees, the sunrise azimuth would be 180 degrees.

And in fact this is exactly what happens at latitude 66.55 degrees, the Arctic Circle. On the Winter Solstice the sun just “blips” above the horizon due South for a moment and lies out of sight the rest of the day. 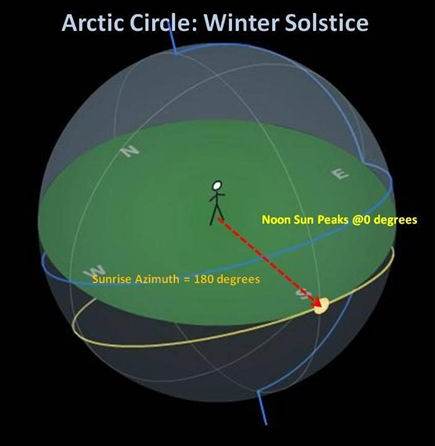 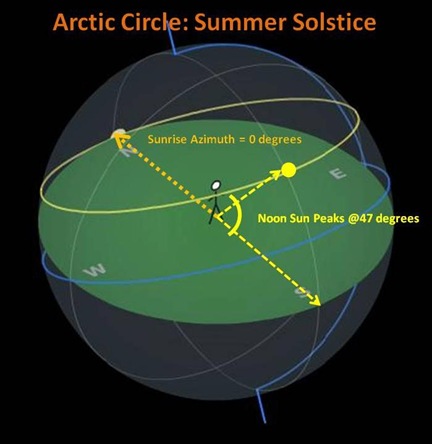 At the Equator it’s only 47 degrees (twice the Earth’s declination.) Everywhere else in between, it’s somewhere between 47 and 180 degrees, with the swing increasing dramatically the further North you go. Here in Salt Lake the swing is about 63 degrees, with a Summer Solstice azimuth of around 58 degrees, and a Winter solstice azimuth of around 121 degrees. 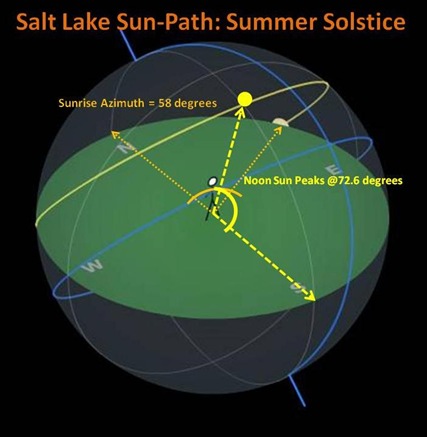 There’s a formula to compute the sunrise azimuth here. It entails actual trigonometry, and therefore goes beyond the kiddie-math scope of this blog.

Trigonometry Appendix: But if you really want to know it, here it is:

where delta is the actual declination for the Earth on that specific day, and omega is something called the “hour angle”, which is computed by this formula:

where alpha is the altitude angle and fi is the observer’s latitude. OK if there’s a record for the least-read paragraph in my blog, this is gotta be it. Seriously, no one is ever going to read this trigonometry stuff. If I ever decide to confess to killing Jimmy Hoffa or a harboring a secret crush on Sarah Palin I'm gonna come back and do it right here in the middle of this paragraph.

But if you can visualize the graphics (and maybe play with the U. Nebraska tool a bit) you’ll get the idea. Anyway that’s why the sunrise/sunset position is so dramatically different between winter and summer solstices, and why that difference is greater the further North you go.

Passing the Winter Solstice always feels somehow like cresting a monster climb during a bike race (the best example being Bald Mtn Pass during the High Uintas Classic, which will be- ironically- on the Summer Solstice.) Just when it gets really unpleasant, just when you’re about to crack, when you doubt you can hang with the lead pack for even another 30 seconds, the climb levels off, you reach the pass, and there’s a whole new world on the other side. And then things get really interesting.

A little fact I picked up from a televised astronomy class (on UEN, channel 9) was that the north side of objects (buildings, trees, etc.) will not be shaded all year. At first this makes no sense since even at the Summer Solstice the sun is only up 72.6 degrees and that's not even close to 90 degrees (straight up overhead). But it's the arced path of the sun in a tilted plane that does it.

As you noted, at the Summer Solstice the sun rises at 58 degrees azimuth. That's north of due east so north-facing surfaces get sun in the morning and evening.

The astronomy teacher related a story of a friend who put a weather station on his roof and put the temperature sensor on the north wall of his house so it would never be in the sun. Imagine his surprise when his temperature readings for a good part of the Summer were high because the sensor received sunshine.

There are a lot of wondrous things going on all around us. Which is why I enjoy your blog.

KanyonKris: That sounds like a cool class. I'd watch more TV if I could find stuff like that on! I love the North-side-getting-sun thing you bring up because it's one of those things that seems completely counter-intuitive till you know what's going on, and then it makes total sense. Those kinds of light-bulb-going-on moments are one of the things I enjoy most about the natural world.

As you can tell, changing sun angles fascinate me. One thing I'm going to try to make a point of doing in 2009 is to photograph sunrises, sunsets and shadows from certain points on trails I ride repeatedly throughout the season, so that I can do a better job observing how they change over the year.

I like your plan of taking photos throughout the year to compare them.

I finally had time to play with the Sun motion simulator - cool indeed!

I turned on the analemma and set the animation to days to see how the sun moves over the course of a year. I'd forgotten some of the details about the analemma so I looked it up on Wikipedia and got stuck on this statement:

"The analemma is plotted with width highly exaggerated, which permits noticing that it is very slightly asymmetrical (because of the two-week misalignment of the apsides of the Earth's orbit and its solstices)."

Two-week misalignment? So I started digging. From what I could gather (correct me if I'm wrong) the Winter Solstice is defined as the shortest day of the year, but is not the same as when the Earth is closest to the Sun (January 4 in 2009). Fun stuff. If you want to follow my path, go to Wikipedia and read about analemma, apsis and solstices.

I tried looking for the Astronomy class I'd seen on TV (UEN) a few years ago, but couldn't find it. The teacher had fairly thick glasses and I believe he was at SLCC at the time of the recording. He delivered the info fast and used a few graphics. I'd like to have these recorded so I could pause and go back over some of the finer points. But after a half hour of digging, I couldn't find anything about this course. Sorry.

Right you are- perihelion will be Jan 4 this coming year. And at first it seems counterintuitive that perihelion and aphelion don't line up with the solstices, but then you realize there's no reason they should... Perihelion always gets me thinking about how lopsided Earth's orbit is; radius varies by almost 3.5% between perihelion and aphelion. That's pretty lopsided.

No worries re: the program, but if you ever stumble across it again shoot me an email. Thx.

I need help figuring out the winter azimuth in my area... I don't understand it at all. We want to build a Walapini - google them if you're unfamiliar with them. Can you help?

CamDan- use this site to find azimuth for given dates at your location:

Use the "Columns" dropdown to display azimuth.

I love this stuff and think about it all the time. I'm in N. Wales, and it is early June. I've long understood the formula for the altitude of the sun at local noon for the solstices, but have wanted a similarly simple formula for the azimuth. Now I get the principle and don't mind the trig, though I'm not actually going to do it.
thanks!!